There’s an old saying around the sports world that concludes records are meant to be broken. Certainly, it’s a solid narrative. In no way does that make it true.

Will anyone really challenge Jerry Rice’s career receiving marks? Can any team go undefeated throughout the entire regular season and the playoffs? Up to this point, challenging those records have been futile.

With that said, there are nearly a dozen records that could very well fall during the 2018 NFL season. Let’s look at them here. 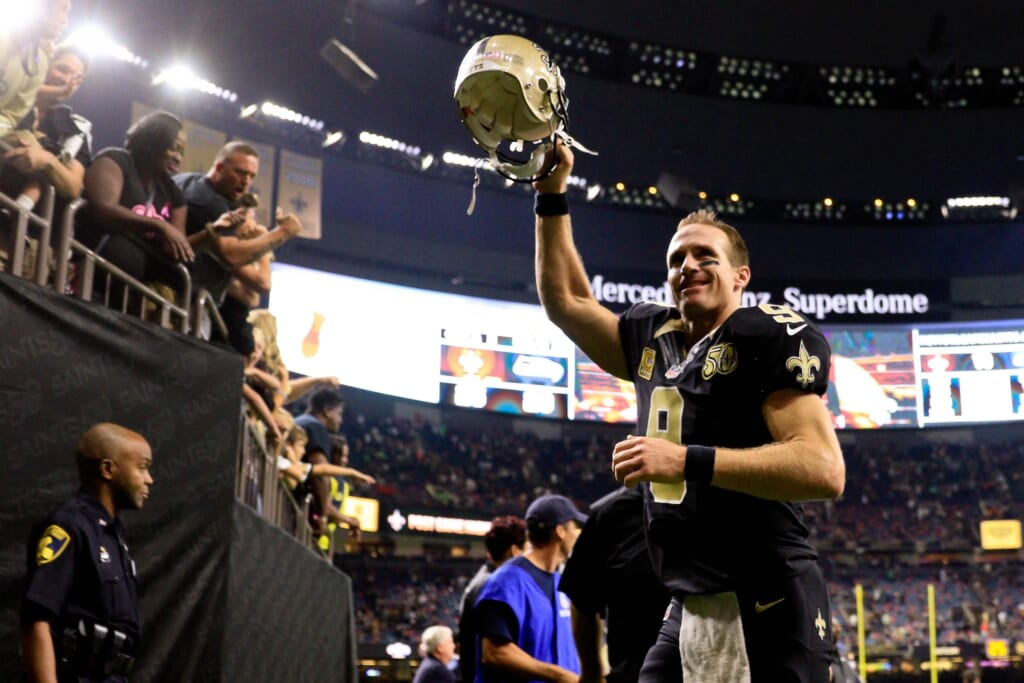 This is a record that has been broken six times since the turn of the decade. It’s in no way a surprise given that we exist in a pass-first NFL right now. With so many quarterbacks boasting the ability to toss for 5,000-plus yards in a given season, there’s no reason to believe that Peyton Manning’s record of 5,477 set back in 2013 won’t be surpassed.

Look at it this way. Drew Brees has thrown for 4,900-plus yards a total of six times in his career. With a catch-first back in Alvin Kamara and one of the best young receivers in the game, Michael Thomas, it’s almost a foregone conclusion that Brees will reach that plateau again in 2018.

In fact, we’d give an educated guess that about one-quarter of the league’s starters could break the record. That includes Brees, Tom Brady, Matthew Stafford, Matt Ryan and Aaron Rodgers, among others. This is the least safe single-season record heading into the 2018 campaign.

Working under the assumption that the NFL will continue to be a pass-first league and quarterbacks will continue to shatter records, it only stands to reason that receivers will benefit. We’re no longer in the Jerry Rice era, when he put up single-season marks that wouldn’t even touch the likes of Julio Jones and Antonio Brown in the modern game. That’s what happens when you transition from a more balanced offensive approach to one that’s pass-heavy.

Marvin Harrison currently holds the record with 143 receptions for the Indianapolis Colts back in 2002. Of the top-six single-season marks, five have been recorded this millennium. That’s yet another example of just how much NFL teams rely on the pass.

If we were to guess, Pittsburgh Steelers wide receiver Antonio Brown would be the one to watch this coming season. He’s averaging 118 receptions over the past four seasons and boasts two of the top-four individual marks in league history. Though, Julio Jones of the Atlanta Falcons and the underrated Michael Thomas could also figure into this conversation.

Most rushing yards for a rookie 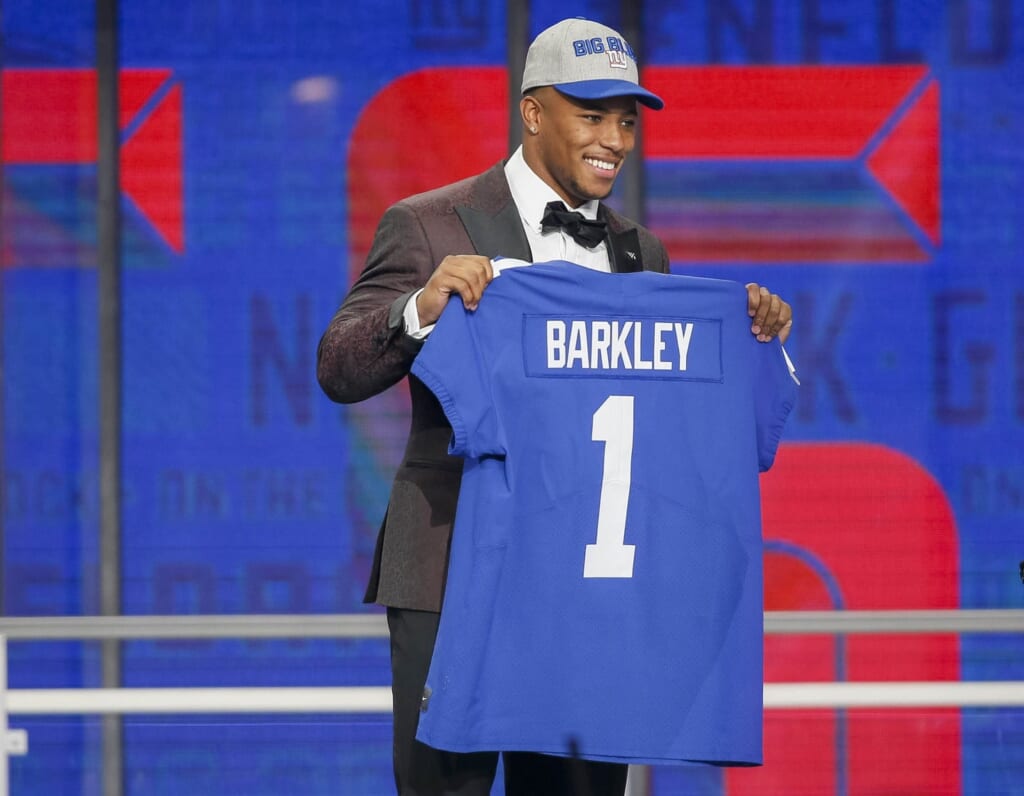 Here’s a record that’s been as longstanding as pretty much any in the NFL. Eric Dickerson set the mark for a rookie with 1,808 yards with the Los Angeles Rams back in 1983. Ezekiel Elliott came close to breaking said record with 1,631 yards as a rookie for the Cowboys two seasons ago. Certainly, the imbalance we see on offense today has played a role in no running back breaking Dickerson’s mark. That’s going to be an overriding theme moving forward.

Even then, look for New York Giants rookie No. 2 pick Saquon Barkley to challenge Dickerson in 2018. New York didn’t buy him that high to baby the former Penn State star. He’s going to be given an immediate three-down role as a way to help an aging Eli Manning succeed under center. If the Giants’ defense is able to keep games close, there’s no reason to believe Barkley can’t put up 320-plus rush attempts. At that point, anything is possible.

Two words. Marcus Peters. With 19 interceptions over his first three NFL seasons, the new Los Angeles Rams’ cornerback has proven to be an all-time great ball hawk early in his career. Now, imagine Peters sitting back in a scheme that benefits this skills under the legendary Wade Phillips in Southern California. He’s going to eat. He’s going to eat a lot.

More so than any other record, this one has been hard to crack. Night Train Lane of the 1952 Los Angeles Rams holds the mark with 14. Of the top-20 single-season marks, Lester Hayes is the only player to crack this list from 1980 on. That’s some absurd stuff. But with an increase in passer-friendly offenses in the NFC West (Jimmy Garoppolo and Russell Wilson), the opportunities are going to be there for Peters. If not him, Detroit Lions cornerback Darius Slay has an outside shot. He recorded a league-high eight last season.

When all is said and done, the 45-year-old Adam Vinatieri could hold pretty much every record for a kicker in league history. Having made his NFL debut when 2018 No. 1 pick Baker Mayfield was just a slobbering one-year old boy, Vinatieri’s excellence has spanned four different presidential administrations and three different decades. He just keeps going, as evidenced by the 109 points he put up last season. 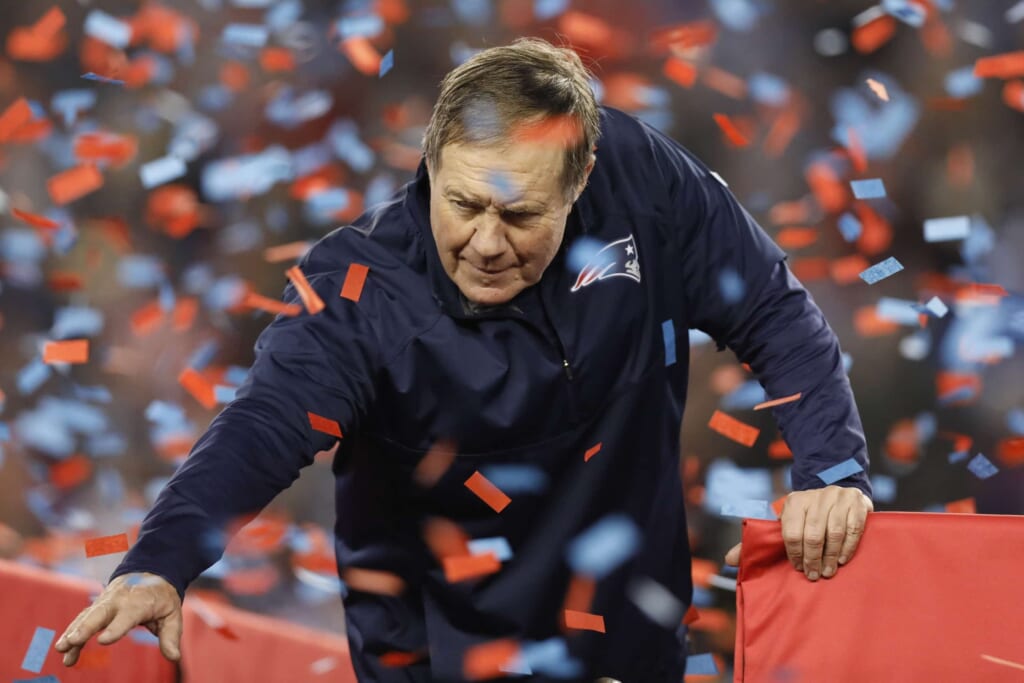 Including his two titles as an assistant with the New York Giants, Belichick is currently tied with former Denver Broncos and San Francisco 49ers front office man Neal Dahlen for the most ever among non-players. If the Pats had won against Philadelphia this past February, Belichick would’ve shattered the mark.

With three Super Bowl appearances in the past four seasons and eight under his belt in New England, there’s every reason to believe Belichick and his Pats will contnue to be the top dog in the AFC. If so, another Super Bowl title as the head coach enters the twilight of his career would not be out of the equation. It’s just a continuation of what has been the best coaching performance in modern league history. Sorry, Bill Walsh.

Speaking of the Patriots, Mr. Tom Brady is not a happy camper right now. He was away from the team’s organized offseason activities and simply seems to be in a terrible mood. Add in the suspension the NFL levied against him two seasons back, and an angry Tom Terrific could very well be bad news for opposing NFL teams. That brings us to our initial point here.

Brady needs 52 touchdowns this season to break Peyton Manning’s all-time mark. Given that he’s put up 50-plus touchdowns just once in his brilliant career, that seems to be an unlikely scenario. But did we mention that an angry Tom Brady means a very good Tom Brady?

Outside of that narrative, New England might rely on Brady more this coming season than ever before. It lost multiple defenders on a defense that disappointed last season. The team will also be relying on rookie Sony Michel in the backfield after losing leading rusher Dion Lewis in free agency. While unlikely, there’s a chance that Brady could break the all-time touchdown mark this season.

This is a record that Drew Brees should break relatively early in the 2018 season. Having averaged 4,925 passing yards (read that again) over the past 10 seasons, the future Hall of Famer needs just 1,496 yards to pass Peyton Manning on the all-time list. That accomplishment should come at some point within the first six games of the season.

Certainly, existing in a pass-first league has helped Brees a great deal. After all, seven of the top-nine all-time marks come from players who have suited up this decade. Consider this: Joe Montana ranks just 18th on the list. Given that he’s right up there with Tom Brady as the greatest ever, that’s a clear indication that quarterbacks have it easier in today’s NFL. Brees is a prime example. 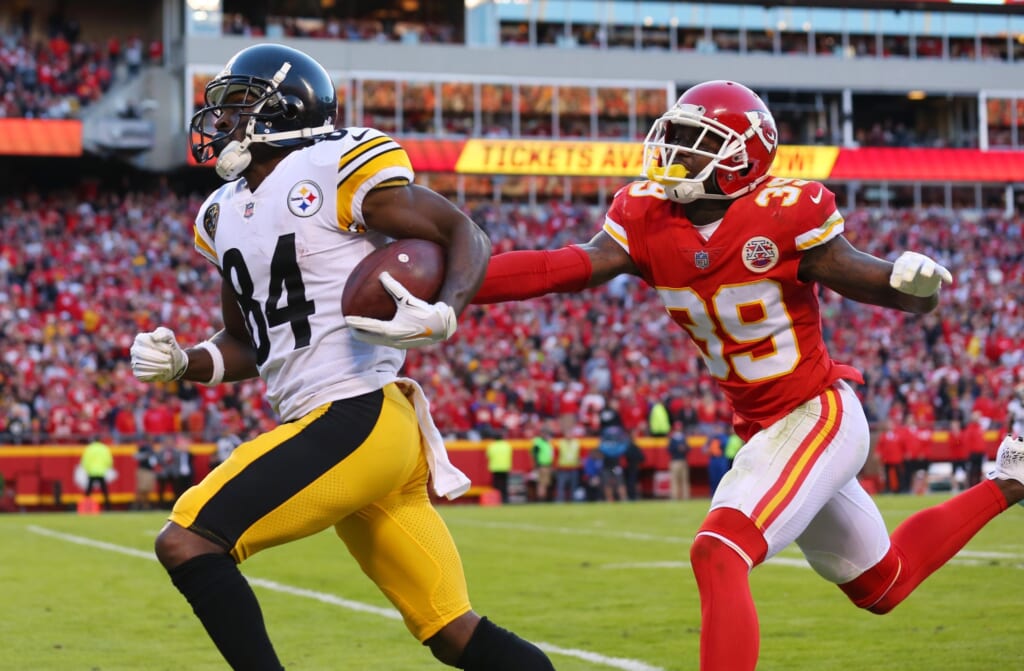 Based on the high volume of targets for the game’s best receivers, this record is bound to be broken at some point soon. Hall of Famer Randy Moss holds the record with 23, a number he put up for the undefeated New England Patriots back in 2007. That surpassed Jerry Rice’s previous high. Since then, only Rob Gronkowski in 2011 has recorded 17-plus touchdowns.

We fully expect that to change in 2018. Falcons receiver Julio Jones is a true wildcard here. Based primarily on red-zone struggles overall, Jones has recorded just nine touchdowns over the past two seasons. That very same span has seen him targeted 277 times. Something has to give on that front. Though, it’s Antonio Brown we’re looking at to challenge the record. Pittsburgh’s top receiver has been targeted an average of 172 times over the past five seasons.

For a stat that’s only been kept for three-plus decades, it’s surprising to see how inactive this list has been in recent years. Back in 2001, Michael Strahan recorded 22.5 sacks en route to breaking a mark that had stood for 18 seasons. Then, a decade later, Jared Allen came within a half sack of tying the record. Since then, only Justin Houston has recorded as much as 21 sacks.

In no way does this mean the record is safe. Coming off two injury-plagued seasons, three-time NFL Defensive Player of the Year J.J. Watt is seemingly completely healthy. All the Houston Texans EDGE rusher has done in his career is put up two seasons with 20.5 sacks. Another player to watch here is Oakland Raiders star Khalil Mack, who is averaging north of 12 sacks over the past three seasons and will be playing in a more friendly defense this season under coordinator Paul Guenther.

Tom Brady had an opportunity to add to his own personal Mt. Rushmore with a Super Bowl win over the Philadelphia Eagles this past February. Despite a performance for the ages, that did not come to fruition.

Now with eight Super Bowl appearances under his belt, GOAT has one more feat he wants to reach before calling it a career. That is to pass Charles Haley for the most Super Bowl victories for a player in league history. Sure Haley was important to the Cowboys and 49ers squads that earned a combined five titles under his watch. But Brady will go down in lore if he’s able to bring yet another title to the Patriots before calling it quits. That could very well happen this season.