While the superstar players grab the attention, they’re not always the ones that win NFL football games. Oftentimes, it’s the unheralded NFL players who step in, make an impact, and help deliver a win.

Those are the guys we’re focusing on today.

These players are certainly not household names, but all find themselves with favorable Week 1 assignments that will permit them to shine.

One would be hard-pressed to find a receiver with better physical tools than Conley. Listed at 6-foot-3 and 205 pounds, Conley ran a 4.35 40-yard dash at the 2015 combine. That’s a remarkably impressive blend of size and speed.

With 17 receptions for 199 yards and a touchdown, Conley’s rookie season didn’t amount to much more than a cameo. During this year’s training camp and preseason, however, Conley began to show that 2016 could be a true breakout campaign.

“His routes are more crisp, he’s caught everything that’s come his way, and he’s getting open every chance he gets,” per Wesley Roesch, USA Today. “Alex Smith is developing chemistry with Conley that could carry over to the regular season.”

Which brings us to another reason for optimism. Since joining the Chiefs, Smith has done very well against the San Diego Chargers, completing better than 70 percent of his passes for a 102.9 passer rating.

Lastly, of course, is the defense that Smith and Conley will be facing. By total passing yards, the Chargers pass defense was solidly mediocre in 2015. The Bolts allowed 3,786 yards in the air last year, tied for the 15th best total in the NFL.

But we have to remember that the Chargers were 4-12. With that record, teams weren’t passing on them a whole heck of a lot late in games. When teams did pass on San Diego, they were generally successful.

If 2015 is an indication, the Chiefs receivers should have a strong Week 1 against the Chargers. pic.twitter.com/SfQat3Z07T

The defense may be a little better this year, but the Chargers’ secondary remains largely unchanged. While the defense is worried about containing Jeremy Maclin and Travis Kelce, expect a few big plays from Conley.

If a team’s owner doesn’t even express a lot of optimism in his offensive line, why should anyone else? Owner Jim Irsay has gone on record saying that he’s concerned about the Colts’ pass protection.

“I’m concerned like any fan out there,’’ Irsay said, per Mike Chappell, CBS 4 Indy. “I think we can get it stabilized, but obviously the Eagles game was concerning, and until we prove otherwise, we’re going to be tested every play.’’

The Indianapolis line is going to be tested in Week 1 against Ezekiel Ansah. who is likely to see a lot of attention in the form of double (or even triple) teams. That’s going to leave right tackle Joe Reitz in a lot of one-on-one assignments against Taylor.

This is definitely a matchup that favors the Lions. Taylor emerged into a good pass rusher in 2015, recording seven sacks.

Andrew Luck is generally good at getting rid of the ball, so Taylor may not record many sacks. But we can certainly expect to see him in the Indianapolis backfield, making himself well acquainted with the Colts’ quarterback.

"What he's doing isn't a surprise."

The San Francisco 49ers’ offensive line will have its hands full in Week 1’s Monday Night Football finale. We can safely assume that Aaron Donald and Robert Quinn will both draw a lot of attention. The team that wins this game could well be the one that wins the battle between Brown and William Hayes.

Why does that matchup favor Brown?

Denver Broncos EDGE rusher Von Miller recently spoke about some of his tougher assignments. In doing so, he sang the praises of the 49ers’ second-year tackle.

That’s some high praise from one of the NFL’s top pass rushers. A matchup with Hayes should give the unheralded lineman a chance to show what he’s made of against a proven veteran.

Rest, easy Rams’ fans, you’ve got a good matchup in your favor. As a matter of fact, a good game from Brown almost plays into Joyner’s hands.

Brown may well create more time for Blaine Gabbert to throw the ball, but he’ll still need someone to throw to. San Francisco currently lists Torrey Smith, Jeremy Kerley, and Quinton Patton as its starting receivers. That’s not exactly a trio that will strike fear into the hearts of opponents.

The 49ers’ offense figures to run the ball a lot, meaning that Joyner may resemble a linebacker more than a nickel corner. While Joyner is undersized, he’s very qualified to play that role. His speed will create problems for the San Francisco backfield and he’s certainly got the pop to deliver a tackle when needed.

When the 49ers do pass, Joyner will likely be matched up on Kerley or Patton. Both assignments favor the defensive back.

There hasn’t been a lot of good news coming out of Vikings’ camp in a while. But fans of Minnesota’s can take some solace in the fact the Week 1 assignment looks favorable.

The Tennessee Titans have one of the NFL’s shakiest offensive lines, especially in the middle. That should make Floyd’s Sunday a very pleasant one. Derrick Henry, DeMarco Murray, and Marcus Mariota may not be so fortunate.

Week 1 is a glorious chance for the Vikings to refocus purely on football. The loss of Teddy Bridgewater hurts, but he was never the reason that this team had Super Bowl buzz. Bridgewater was a solid quarterback, but not this team’s driving force.

The driving force in Minnesota was the defense. Floyd figures to be on the better end of a mismatch all day on Sunday. He’ll either be a force that stops plays himself, or he’ll draw so much attention that the rest of the Vikings’ front seven can wreak havoc. Either way, Floyd figures to be a difference maker.

In general, the New Orleans Saints’ pass defense was so bad in 2015 that if it’s just average in 2016, it may warrant a parade on Bourbon Street. Generally speaking, Derek Carr hasn’t backed down from challenges against tough defenses. Against a porous defense, expect Carr to come out slinging in an effort to outduel future Hall of Fame gunslinger Drew Brees.

Now, how does Smith fit into all of this?

Somehow, someway, the Saints are going to have to contain Amari Cooper and Michael Crabtree. That’s going to mean a lot of double teams. On top of that, don’t be surprised if New Orleans tries to blitz Carr, limiting his time to find his receivers. Going against one of the best offensive lines in the league, rushing four is probably not going to do it.

All of that is going to open up more space on the field for Oakland’s tight ends. Smith is No. 1 on the depth chart.

Fantasy players in deeper leagues may want to think about gambling on Smith in Week 1. From a fantasy perspective, no defense was worse against tight ends in 2015 than the Saints.

The Green Bay Packers have made the playoffs in each of the last seven seasons. It’s a level that the young Jaguars hope to reach. The Jags will get a great chance to show how improved they are against the Packers in Week 1.

On the defensive side of the ball, plenty of attention will be paid to rookies like Jalen Ramsey and Myles Jack, or Dante Fowler, who’s making his long awaited debut after missing his rookie year. Newcomers like Tashaun Gipson and Malik Jackson and stalwarts such as Paul Posluszny will also have the spotlight on them.

That’s going to leave Odrick in a lot of one-on-one assignments against an offensive line that allowed the fifth most sacks in the NFL a season ago.

Expect Odrick and Aaron Rodgers to get to know each other pretty well on Sunday.

If Odrick takes advantage of what should be a mismatch, Jacksonville’s chances at pulling the upset go up exponentially.

Fortunately for the Packers and their fans, the Green Bay defensive line will pose similar problems against Jacksonville’s offensive front.

The Jags need to protect Bortles. Unfortunately, they don’t have a great offensive line. The line will have even more problems than normal this week against Clay Matthews and Julius Peppers. That’s going to put Lowry, the fourth round rookie, into a lot of favorable situations.

The man he figures to see a lot of is Luke Joeckel, who is hoping to revitalize his career as a guard. While Lowry is a rookie, the fact that Joeckel is playing his first game at a new position evens the experience playing field out quite a bit.

Lowry will certainly get chances to make an impression early in his career. He and Bortles should spend a lot of quality time together on Sunday. 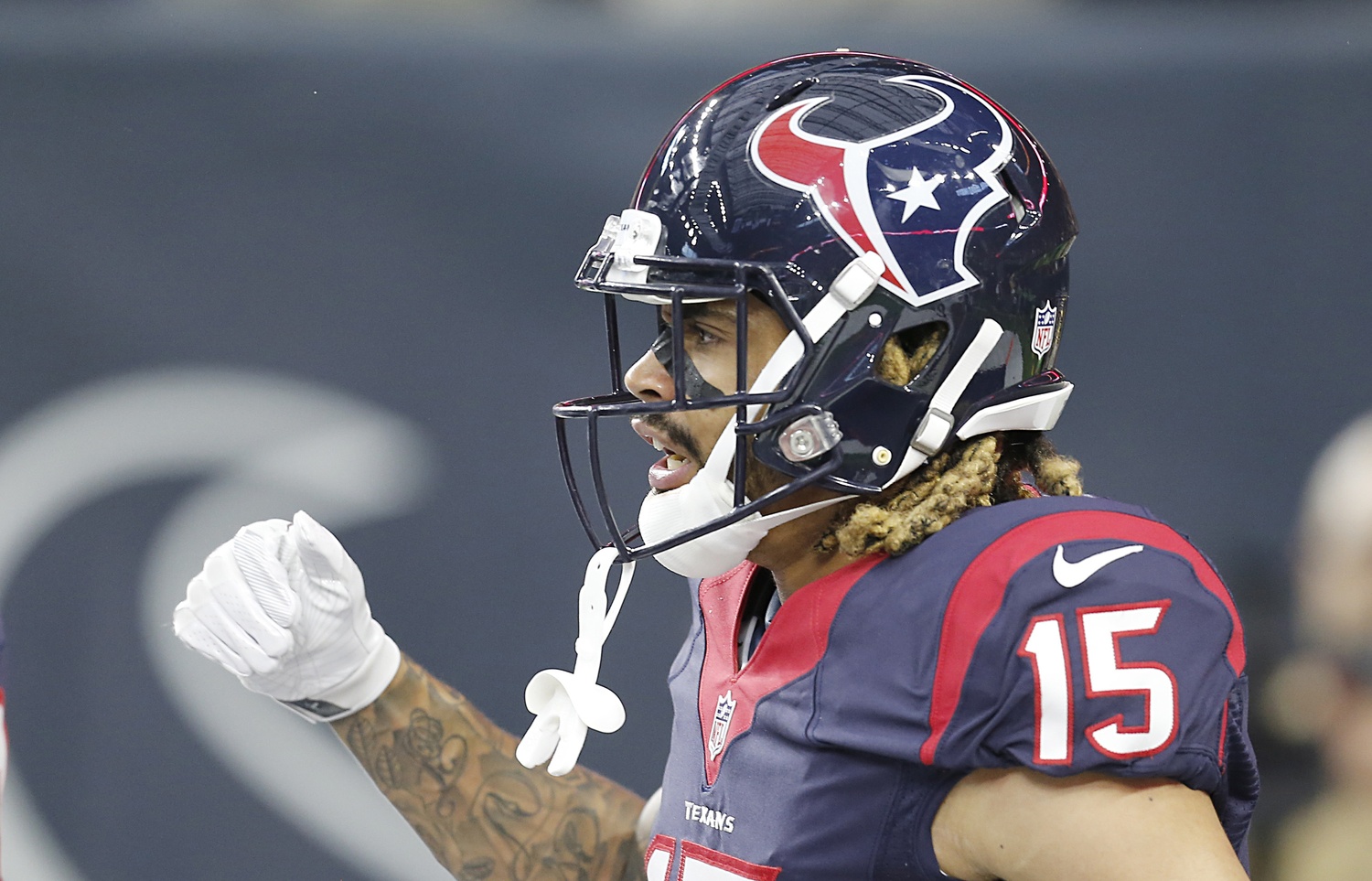 The Chicago Bears do not have a great secondary. Much like the Chargers, the Bears had decent overall passing yards allowed numbers in 2015, but that was more a product of losing a lot of games. When teams passed on Chicago, they were successful.

In Week 1, the Bears will have their hands full with DeAndre Hopkins. The attention that Hopkins will certainly draw will open up the field for Fuller. That makes him a savvy pickup in fantasy football.

“His season could very well become a Ted Ginn Jr.-style carnival ride, full of field-flipping plays and appalling drops,” said Andy Behrens of Yahoo Sports. “But in the end, the numbers should be useful. He’ll never see a double-team while Nuk is on the field, and Chicago has no one in its secondary who can check this kid.”

Obviously, we’re talking about the actual game, not just fantasy. But in the case of a receiver, the gridiron and the fantasy scoreboard are essentially one in the same.

Unless a Chicago secondary already racked with injuries wants to fall victim to a season’s worth of big plays by Hopkins, it will have no choice but to leave Fuller in isolation with a lot of single coverage. That should translate to a big day.

Huff’s big play capability is not particularly in doubt. A season ago, he averaged nearly 21 yards per reception. Unfortunately, that was spread out over only 27 receptions.

Hill caught six passes for 70 yards in the preseason. But even when they weren’t throwing the ball, the Eagles found a way to get the speedy Hill involved.

Josh Huff TD run! Like if you want to see Huff used more like this in the Eagles offense pic.twitter.com/KTTJ5bMkeX

This week’s matchup sets up well for Huff and the rest of Philadelphia’s receivers.

The Cleveland Browns had one of the NFL’s worst defenses against receivers a season ago. Only the Pittsburgh Steelers and New England Patriots allowed more yards to receivers. Those teams made sense. The Pats were 12-4, while the Steelers were 10-6. They allowed a lot of passing yards because they were up in a lot of games and teams had to pass against them.

The 3-13 Browns had no such excuse. They just didn’t have a good secondary and that isn’t likely to change much this season. It’s the perfect week for Huff to step up and take the next step towards being a big time NFL playmaker.