There seems to be more questions than answers following Sunday’s slate of Week 11 NFL action. The Arizona Cardinals may have cemented their status as the best team in the NFC, but now both the Seattle Seahawks and San Francisco 49ers are in a precarious position of battling with one another for a wild card spot.

Meanwhile in the AFC, the Denver Broncos went into St. Louis and put up a whopping seven points against a last-place Rams team. The previously first-place Cleveland Browns fell to last place after being thrown to the wolf that we now know is J.J. Watt.

I guess the one thing we learned from Sunday’s action is that the Green Bay Packers and New England Patriots are playing the best football in the NFL heading into the stretch run.

As it is, here is our weekly look at the top-10 takeaways from Sunday’s Week 11 action.

1. Aaron Rodgers is Playing the Best Football of Any Quarterback in NFL History 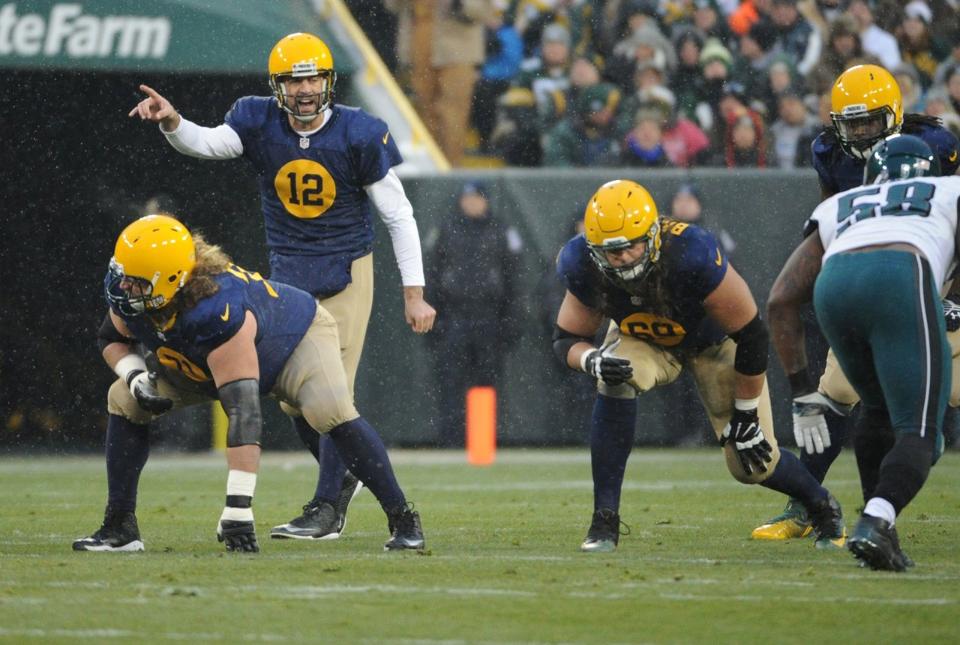 Courtesy of Packers.com: Rodgers level of play right now is among the best ever.

Following another 50-point outing, Aaron Rodgers and the Packers are playing some exceptional football on the offensive side of the ball. The former NFL MVP completed 22-of-36 passes for 341 yards with three touchdowns in a 53-20 blowout victory over the Philadelphia Eagles on Sunday. It was just the latest example of Rodgers proving that he’s playing the best football of any quarterback in the long history of the league.

Rodgers has now tallied 28 touchdowns and three interceptions for a quarterback rating of over 120 on the season. That puts him in line for a historically great campaign. Relax Packers fans, Rodgers is in the process of leading your team to a playoff spot as one of the top teams in the conference. And by virtue of the Detroit Lions’ loss to the Arizona Cardinals, Rodgers has his team tied for first place.

2. Seattle Seahawks May not be a Playoff Team

Following a 24-20 loss to the Kansas City Chiefs on Sunday, the defending champions find themselves in third place in the NFC West (losing tie-breaker with the 49ers). That’s not necessarily what Pete Carroll and Co. had envisioned leading up to a season that many expected the Seahawks to defend their crown.

The issues are widespread here, and one loss to Kansas City on the road tells us some of the story. Playing without defensive anchor Brandon Mebane, who is out for the remainder of the season, the Seahawks yielded 190 yards on 30 rush attempts for a ridiculous 6.3 yards per rush. While third-down defense has been somewhat of an issue this season for Seattle, Dan Quinn’s unit didn’t have an opportunity to stop the Chiefs on third down too often. Kansas City only put up six third-down attempts throughout the game, which is an indication that the team wasn’t have much of an issue moving the ball.

Overall, the Chiefs may have put up less than 300 yards, but they dominated the trenches. Alex Smith was not hit a single time, while Russell Wilson found himself on the ground nine times throughout the game, including two sacks. This really hasn’t been the Seahawks MO during their runs in the previous season.

Now with games coming up againt the Arizona Cardinals and San Francisco 49ers, there is a decent chance Seattle could find itself nearly out of the playoff race by the time December comes calling. With that said, don’t count this team out completely. The talent and winning atmosphere that seems to be embedded within the franchise could help Seattle turn things around as the season progresses.

Speaking of the Chiefs, they are now tied for first place in the AFC West following a solid home win against Seattle. Winners of five in a row and seven of their last eight, the game plan was rather simple for Kansas City on Sunday. Alex Smith attempted just 16 passes, as the Chiefs ran roughshod over the Legion of Boom. Meanwhile, the likes of Tamba Hali and Justin Houston put consistent pressure on Russell Wilson throughout the afternoon.

With a game coming up against the winless Oakland Raiders on a short week before they host the Denver Broncos Thanksgiving weekend, the Chiefs have an opportunity to prove that they are the class of a division that includes the defending AFC champions. It’s now going to be all about Smith going up against Peyton Manning and coming out on top. That’s something he hasn’t done during his Chiefs career (0-3).

4. Get the Rams a Quarterback, and They Become Instant Contenders 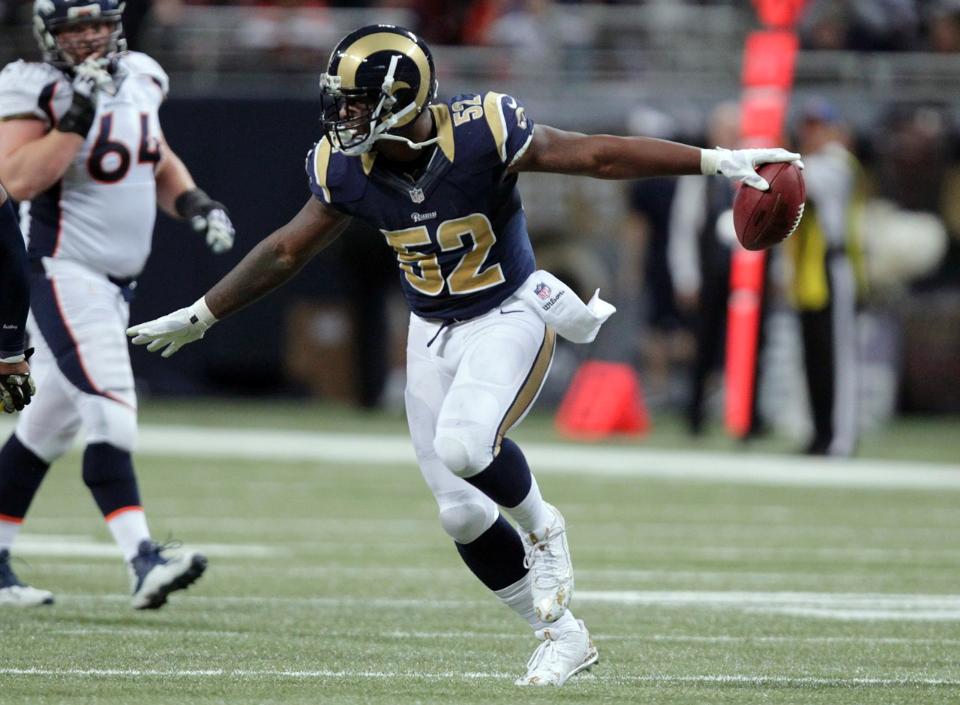 Courtesy of the St. Louis Rams: As evidenced by Sunday’s win over Denver, the talent is there in St. Louis.

You don’t beat the San Francisco 49ers, Seattle Seahawks and Denver Broncos within a span of five weeks on accident. The talent is most definitely there for a Rams team that pretty much handled Denver at home on Sunday. St. Louis forced Peyton Manning and Co. into a one-dimensional attack by allowing just 28 yards on 10 rush attempts. When Manning dropped back to pass (56 times), he was under constant pressure.

Offensively, Shaun Hill managed a beautiful game. He completed 20-of-29 passes for 220 yards with a touchdown and zero interceptions in a clean performance. Tre Mason added 113 yards on 29 attempts, while Kenny Britt recorded 128 receiving yards against a Pro Bowl-caliber cornerback in the form of Aqib Talib. And when all was said and done, St. Louis pulled off a surprising 22-7 victory.

It’s this type of overall team performance that makes you wonder whether the Rams might eventually find themselves as NFC contenders once they nab that elusive franchise quarterback.

5. One Year (to the Day) Since the Oakland Raiders Have Won a Football Game

After losing a hard-fought matchup with the San Diego Chargers on Sunday, the Raiders have officially failed to win a regular season football game in exactly a calendar year. At 0-10 on the season, Oakland’s last victory came on this day last year against the Houston Texans. Yeah, that’s 16 consecutive games without a win.

As I mentioned before, the Raiders will take on a red-hot Kansas City Chiefs team on Thursday. That will likely mark a 17th consecutive defeat before matchups against St. Louis, San Francisco and Kansas City (once again). That sound you hear right now? Well, it’s likely the 2008 Detroit Lions popping open a bottle of champagne in preparation of the Raiders matching their winless campaign. All the Raiders have to look forward to this season is the progression of quarterback Derek Carr, who had himself a stinker of a game in the 13-6 loss to the Chargers on Sunday. He needs to get that one win under his belt before heading into his first full NFL offseason.

Not only did J.J. Watt record a touchdown catch on an amazing red-zone play in Houston’s 23-7 win over the Cleveland Browns, he recorded five tackles (two for loss) and a sack in a great all-around performance. That touchdown represents Watt’s fourth of the season, which tied a NFL record that has lasted for the past seven decades.

By virtue of the impressive road win, Houston is now just one game behind the Indianapolis Colts in the AFC South. And in reality, Watt’s presence on the team is the primary reason for a 5-5 record heading into Week 12. He’s been one of the most dominating defensive players in the history of the league since a breakout 2012 campaign. Watt’s performance not only Sunday, but throughout the entire year, magnifies his importance to a suprising Texans’ team. 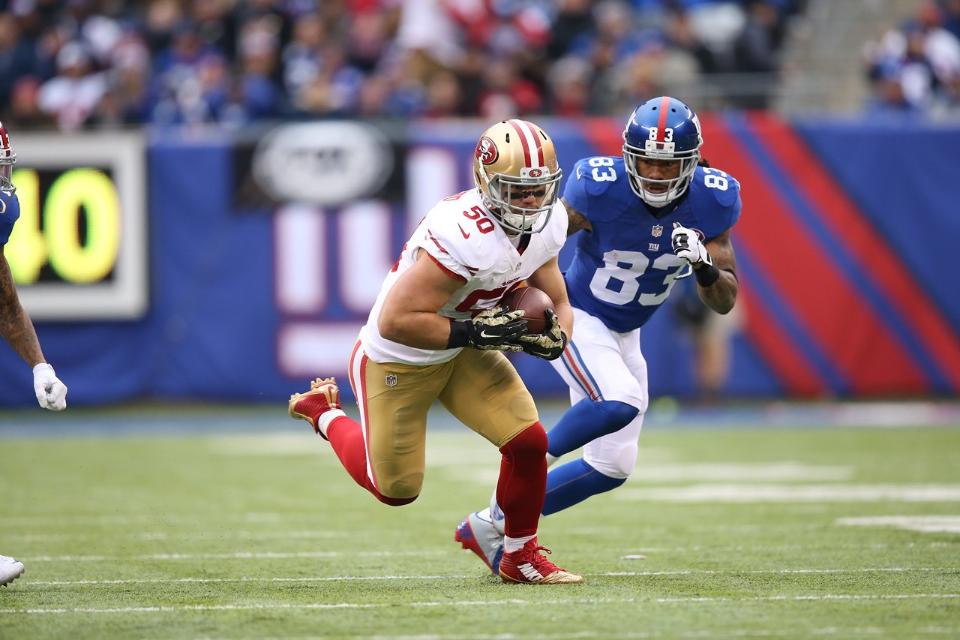 Courtesy of 49ers.com: Chris Borland joins the Rookie of the Year conversation.

It might have been an ugly win for San Francisco against the New York Giants on Sunday, but Jim Harbaugh’s squad will most definitely take it. Their defense intercepted Eli Manning five times, including a game-sealing pick by rookie linebacker Chris Borland near the end zone with just over five minutes left to help the 49ers maintain a 16-10 lead.

It was Borland and fellow rookie Aaron Lynch who put on an absolute show for San Francisco’s defense. Borland, who is quickly becoming an under-the-radar Defensive Rookie of the Year candidate, intercepted two passes, recorded 13 tackles and had three passes defended. Meanwhile, Lynch, a fifth-round pick from South Florida, sacked Manning once and put consistent pressure on the Giants signal caller throughout the afternoon.

With Patrick Willis now lost for the season, Borland’s ability to step into his role may be the biggest factor in the 49ers’ hopes of earning a playoff spot after struggling through the first half of the season. For his part, Lynch is now teaming up with Aldon Smith to form a ridiculous pass-rushing tandem. Heck, he appears to have already unseated Ahmad Brooks as one of the team’s two starting outside linebackers. That in and of itself is saying something.

The Cleveland Browns entered Sunday in first place. But following an uninspired performance in a 23-7 loss to the Houston Texans, Mike Pettine’s squad ended the night in last place. Depending on what happens Monday night in Tennessee between the Titans and Pittsburgh Steelers, Cleveland could very well move up in the standing heading into Week 12.

This just goes to show us how up and down the AFC North is at this point. All four teams are now guaranteed to be at .500 or better when the calendar hits December. That’s an amazing accomplishment for a division that obviously stands above the rest in the AFC. It’s now going to be interesting to see whether the AFC North beats up on itself so much down that stretch that the only playoff team to come out of the division is the one standing atop the standings following Week 17. 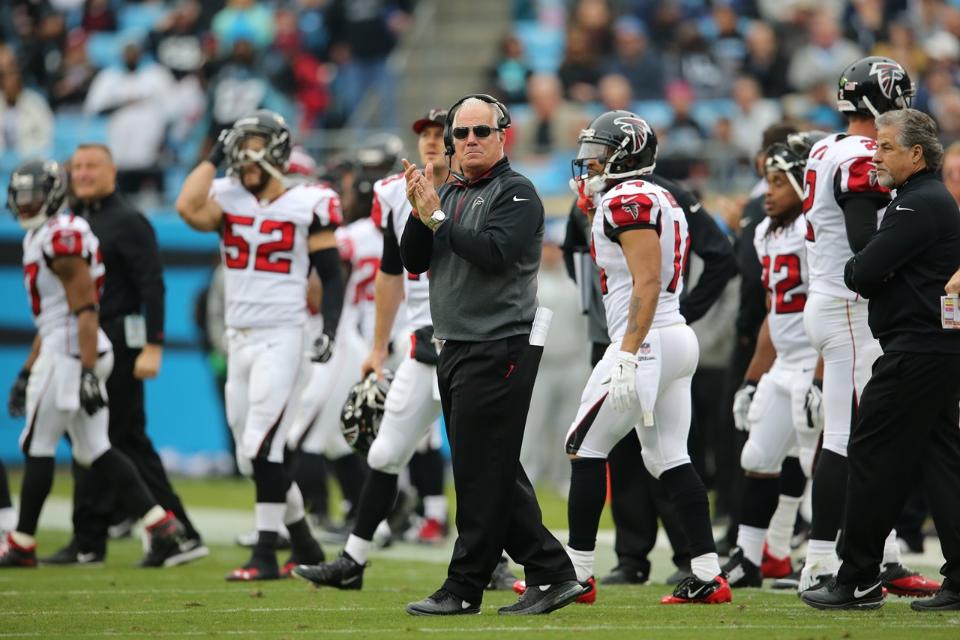 Courtesy of the Atlanta Falcons: At two games under .500, Mike Smith’s squad is in first.

The Atlanta Falcons are currently in first place in the NFC South with a 4-6 record. To make matters worse, Mike Smith’s squad is winless (0-6) out of the division. Heck, the two-win Tampa Bay Buccaneers find themselves right in the midst of the division race just two games behind both Atlanta and New Orleans.

Along with the Carolina Panthers (3-7-1), one of these teams is guaranteed to earn a playoff spot. This is troubling on so many levels. But when you look at some teams that might miss out on the playoffs in lieu of one of the bad NFC South squads, it’s even more embarrassing.

If the playoffs started today, the San Francisco 49ers and Seattle Seahawks (both 6-4) would be on the outside looking in. This means that it’s a near guarantee that multiple teams that includes San Francisco, Seattle, Green Bay, Detroit, Dallas and Philadelphia will not be playing a postseason game this year. That’s an absolute travesty, and the NFL must do something about it moving forward.

After an embarrassing 42-20 loss on Sunday night, Andrew Luck is 0-3 with six touchdowns compared to nine interceptions in three career games against Tom Brady and the New England Patriots. Much like the Pacific Northwest has proven to be Colin Kaepernick’s kryptonite, Bill Belichick’s squad simply has Lucks’ number. In those four games, New England has outscored Indianapolis 144-46 for an average margin of victory of over 30 points per game.

The bad news here for Colts’ fans is that the AFC Playoffs will likely run through New England, who is playing the best football of any team in the NFL right now.