The unpredictability of football. That’s the best term we can use to define Sunday’s slate of NFL action. From Ben Roethlisberger and the Pittsburgh Steelers falling to a last-place New York Jets team to the San Francisco 49ers going into New Orleans and handing the Saints a rare home loss, a lot happened around the league on Sunday.

As we have done each week this season, here are 10 takeaways from Sunday’s Week 10 action. 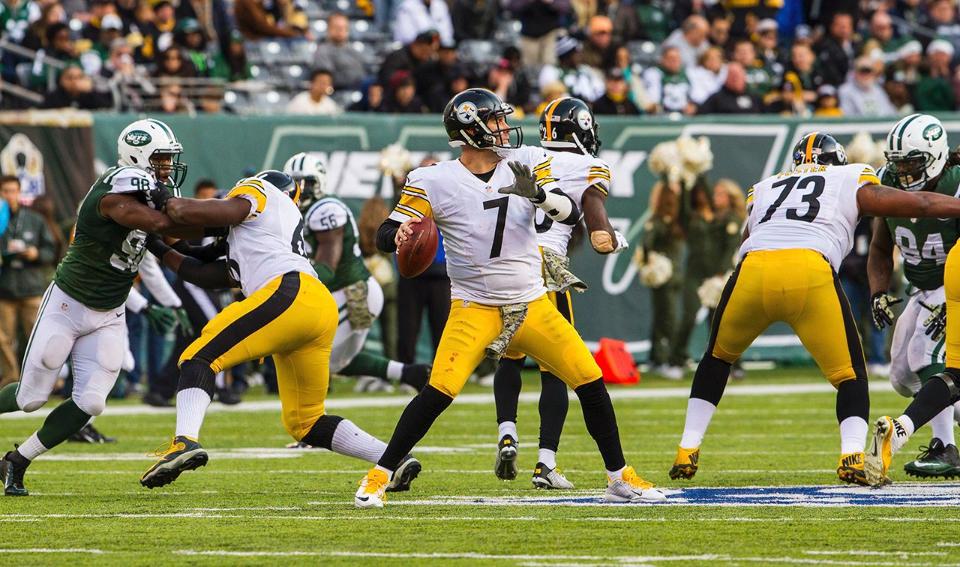 Courtesy of NewYorkJets.com: It was not a banner day for Big Ben and Co.

How in the world can Pittsburgh put up this performance after what it did in the previous two weeks against much better competition? It’s the whole consistency issue that we have been delving into throughout the entire season. Coming off eight consecutive losses and facing a quarterback in Ben Roethlisberger who had thrown 12 touchdowns in his previous two games, the Jets forced four turnovers in an inspiring 20-13 defeat of the Steelers.

For his part, Big Ben threw two interceptions and entered halftime with 53 passing yards. It was that kind of day for a previously hot Pittsburgh team. Now at 6-4 and in tied for last in the AFC North, the Steelers need to start finding more consistency if they are going to earn a playoff spot. Performances like this against NFL bottom feeders aren’t going to help.

It might have been another frustrating day for the 49ers, but they were able to top the New Orleans Saints 27-24 in overtime on Sunday afternoon. That’s the type of win that can help a talented team start a hot streak as we enter the stretch run of the NFL season. It’s also going to help that San Francisco is on the verge of getting reinforcements back on defense.

Going back to the basics, San Francisco ran the ball 32 times for 144 yards. Meanwhile, the defense played great football against a Saints offense that usually dominates at home. Vic Fangio’s unit picked off Drew Brees twice and clinched the victory with a forced fumble of the future Hall of Fame quarterback in overtime.

Still three games behind Arizona in the NFC West, this was simply a must win for a previously reeling 49ers team. Now with games coming up against the New York Giants and Washington Redskins prior to a Thanksgiving night matchup with Seattle, the 49ers have an opportunity to run off a few wins before hitting a more difficult part of their schedule.

3. Cardinals Could be in Trouble

At 8-1 on the season, some may ask why we would even run the headline you see above. Unfortunately for the Cardinals, their win against a division rival on Sunday almost feels like a loss. Multiple reports now indicate that the Cardinals fear Carson Palmer suffered a torn ACL in the 31-14 victory over St. Louis. The Same ACL that he tore nearly a decade ago.

With Palmer potentially lost for the season, Drew Stanton could very well be under center from here on out. And while Stanton did lead the team to two wins earlier in the year, Arizona’s upcoming schedule is ridiculously tough. 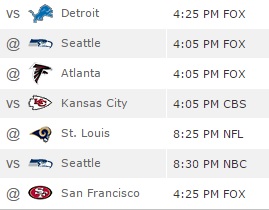 It is conceivable that Arizona’s seemingly insurmountable three-game division lead could shrink big time in coming weeks. Stanton has never had long-term success as a starter in the NFL. Heck, he’s never even been a long-term starter in the NFL. With San Francisco and Seattle looking like they’re righting the ship, the NFC West could get very interesting down the stretch.

As it relates to Palmer, this is an absolute bummer. He just signed a three-year, $50 million extension on Friday and could very well be lost for a large portion of the 2015 season as well. This depending on any confirmation the team receives as it relates to the extent of what is now believed to be an ACL injury. 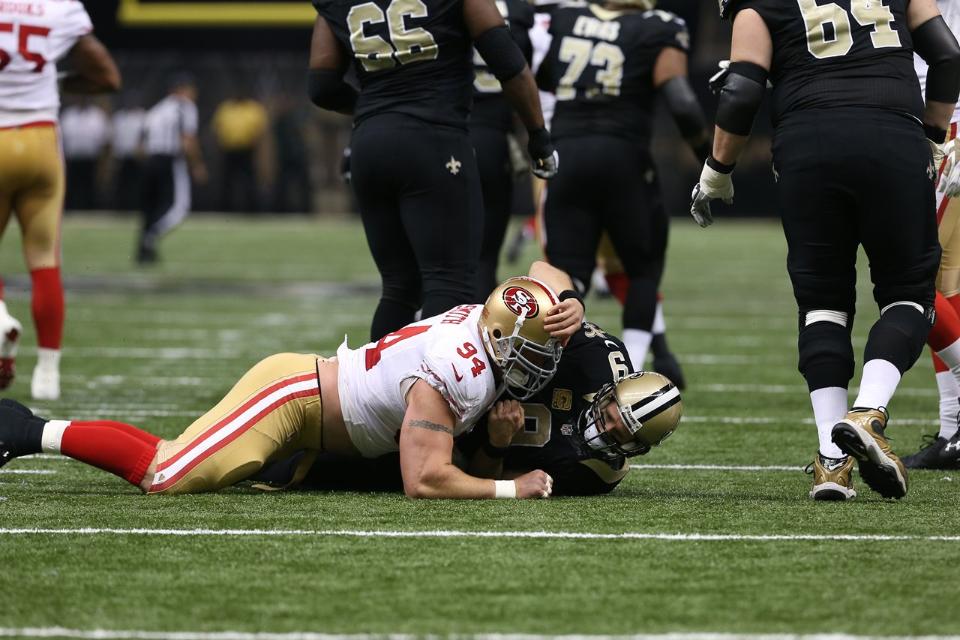 Courtesy of 49ers.com: Will the NFC South pick itself up from the turf?

Since 1986, at least one team in the NFL has made the playoffs after heading into Week 11 with a .500 record or worst. That streak is guaranteed to continue in 2014. By virtue of New Orleans losing on Sunday, the three-win Atlanta Falcons are one game out of first place. That was made possible by Mike Smith’s squad pulling out a win against the equally embarrassing Tampa Bay Buccaneers.

The last time a team earned a playoff spot with a record of under .500 was 2010 when the Seattle Seahawks won what was at that time considered one of the worst divisions in league history. With games coming up against Cincinnati, Baltimore and Pittsburgh, it is extremely likely that the Saints will remain under .500 (and possibly in first place) in this crappy division. Sadly, that means a much better team will be on the outside looking in when it comes to the NFC Playoffs…much like the 10-win Arizona Cardinals last season.

In contrast to the NFC South, this division can flat out play. And by virtue of what happened on Sunday, the Cleveland Browns have sole possession of first place this late in the season for the first time since 1989. Baltimore wasn’t incredibly impressive, but it was able to snap a two-game losing streak in a 21-7 win over Tennessee. Meanwhile, the Steelers fell flat on their face against the Jets.

Taking into account the action from Thursday night in Cincinnati, we have four teams vying for the division title through 10 weeks. Four teams that are all above .500 with Pittsburgh and Baltimore tied for last place one-half game behind the division-leading Browns.

Remember when the Raiders were winning 10-6 early in the second quarter on Sunday? That might very well be the high point of an otherwise horrendous season for the Northern California football team. Denver went on to score 35 consecutive points before a garbage-time touchdown from the Raiders made it a 41-17 final against Peyton Manning and Co. This represents Oakland’s 15th consecutive loss dating back to last season. And as we have mentioned numerous times in the past, it’s hard to imagine this team actually winning a football game in 2014. 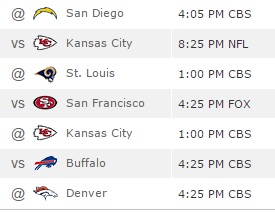 In order to avoid joining the 2008 Detroit Lions as the only 16-loss team in NFL history, the Raiders will have to win one of these games. Unfortunately, the only real shot this team has of coming away with a victory is Week 16 against a Bills team that is still over .500 heading into Week 11. Let’s just hope that Derek Carr’s confidence doesn’t dwindle during what could potentially become a record-tying last seven games of the season. 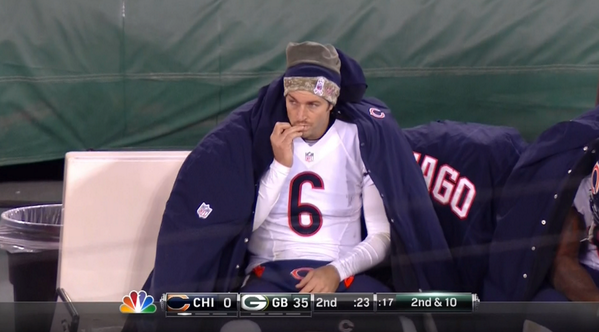 Jay Cutler and the Bears are putting up “historical” numbers.

I really want to know what the ratings were for NBC after Green Bay took a 42-0 lead over the Bears into halftime on Sunday night. That’s should be interesting. On a more sobering note for Bears fans, they are now the second team in NFL history to give up 50-plus points in consecutive games, joining the 1923 Rochester Jeffersons.

It really was that bad. Chicago found every possible way to lose on Sunday night against what is now an extremely hot Packers team. Jay Cutler turned the ball over another three times, including a ridiculous pick-six in the fourth quarter that saw his pass go off the helmet of offensive lineman Kyle Long before Casey Hayward took it 82 yards the other way. That’s now seven turnovers for Cutler in Chicago’s last three games and 15 total this season. Simply put, Cutler is one of the primary reasons the Bears have been historically bad in recent weeks.

Now at 3-6 on the year and four games behind the Detroit Lions in the NFC North, there is no doubt that the Bears hopes for a postseason spot are already gone. The only question remaining here is whether Marc Trestman will last the remainder of the season.

Sunday’s win over the Miami Dolphins represented a major statement for a Lions team that wasn’t getting a ton of respect heading into Week 10. It might not have been pretty at all, but Jim Caldwell’s squad found a way to get it done in the fourth quarter once again. Matthew Stafford connected on an 11-yard touchdown pass with Theo Riddick with less than 30 seconds remaining to give the first-place Lions a 20-16 victory.

With a 7-2 record and firmly in control of its own destiny in the NFC North, this could very well be the season that Detroit proves skeptics wrong. It’s not going to be easier moving forward, especially next week’s matchup against the Arizona Cardinals, but it does appear that Detroit is up for the task. Gritty wins like the one we saw on Sunday are prime examples of a team that is much more mentally tough than the squads Jim Schwartz threw out there in previous seasons.

9. NFC Playoff Race is Going to be Fun 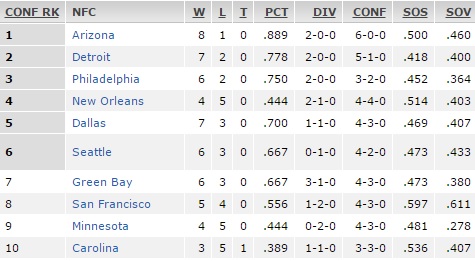 With eight really good teams vying for six playoff spots, the NFC promises to be intriguing moving forward this season. Arizona and Detroit are almost assured of playoff spots at this point, but it’s the bottom of the standings that will provide a ton of drama moving forward.

Notice San Francisco’s strength of schedule right now? That’s going to change a great deal with upcoming games against the New York Giants, Washington Redskins and Oakland Raiders. San Francisco also has two games remaining against the Seattle Seahawks, which could very well tell us a lot about both teams as the season moves forward. Either way you spin it, there are going to be some really good football teams miss out on postseason play. Adding insult to injury, that could happen with a team winning the NFC South at under .500. 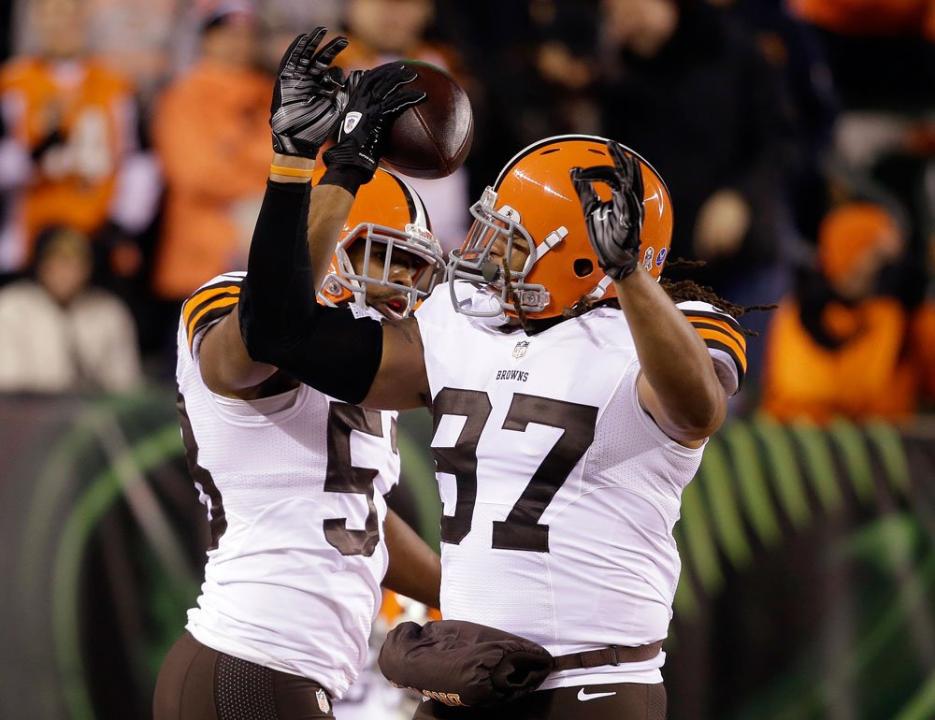 Courtesy of ClevelandBrowns.com: Finally fans in Cleveland have something to cheer for.

Why not? Cleveland has proven that it can go up against some pretty good football teams and come out on top. With wins against Pittsburgh, New Orleans and Cincinnati on the season, the Browns seem to be riding a wave of confidence that might be hard for other AFC North teams to overcome.

Now enter into the equation the returns of Jordan Cameron (injury) and Josh Gordon (suspension). That’s only going to provide Brian Hoyer more tools to work with on the offensive side of the ball. And despite just a half game lead in the division, Cleveland could very well be considered favorites to grab the title.