The first week of NFL free agency might have been one of the most hectic in the history of the league. The minute the new league year started on Tuesday, three major trades were announced. And within a couple hours, some of the best players in the NFL had swapped teams.

For those of us who cover the NFL, it was a combination of euphoria and heartburn. For fans, it probably brought a ton of mixed emotions.

Now that free agency has died down, we can look back at the past week and analyze everything that went down.

One major area of weakness for the Seattle Seahawks last season was the tight end position. A combination of lackluster pass catchers combined for 48 receptions and six touchdowns on 80 targets. Jimmy Graham alone tallied 85 receptions for nearly 900 yards and 10 scores. It’s this type of move that enables an organization to contend for the long haul.

Sure, Seattle yielded a Pro Bowl player and a first-round pick to nab Graham. But as San Francisco 49ers general manager Trent Baalke said about the trade, to get back talent, you have to give up talent. Schneider and company targeted an area of weakness and nabbed one of the best players in the NFL at that position. Graham’s addition to a previously talent-stricken pass-catching unit will only enhance Russell Wilson’s success through the air. That much cannot be denied. 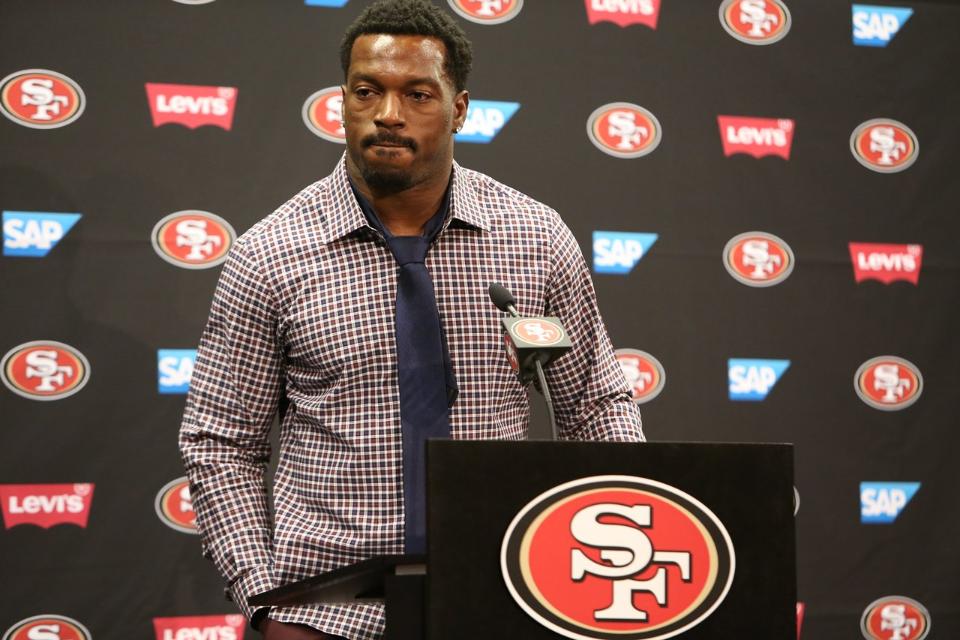 When Patrick Willis retired after eight seasons in the NFL, it caught a lot of people by surprise. A Hall of Fame caliber player hanging his cleats up before even playing a single football game beyond the age of 29. Willis cited the urge to do something else with his life and injuries as the two primary reasons for his retirement.

In addition to Willis, former Tennessee Titans first-round pick Jake Locker surprisingly announced his retirement after just four seasons in the NFL. His primary motivation was also a willingness to try something else in life. This doesn’t even take into account Jason Worilds stepping away from the game at 27 in lieu of receiving millions as a free agent.

Is this a new trend around the National Football League? All three of these former NFL players named above had already earned millions before hanging it up. All three are still young with their whole lives ahead of themselves. Why risk long-term injury when you are already financially set and can attempt another profession? It will be interesting to see if this becomes a theme around the NFL. If so, how does the league react?

3. It’s Darrelle Revis’ World, We’re Lucky to Live in it

The five-year, $70 million contract that Revis signed with the New York Jets last week calls for $39 million guaranteed. Taking into account the $82.5 million Revis has already earned in his career, this means he’s going to take home a minimum $121.5 million during his stint in the NFL. For comparison’s sake, Tom Brady has earned $150 million thus far in his career. Needless to say, that’s quarterback money right there for Revis.

4. Some Teams Still Don’t Get it

Overpaying for a team’s role player. This is a story that has been repeated over and over again since the advent of free agency. It’s a vicious cycle that some of the worst teams in the NFL seem to find themselves in every year.

Let’s look at the Oakland Raiders for a second here. Reggie McKenzie and company possessed a ton of cap room heading into free agency. At that point, the expectation was that Oakland might land a couple top-tier free agents. This obviously didn’t happen. Instead, Oakland doled out $18 million over three seasons for a two-down linebacker in Curtis Lofton. It also signed Nate Allen to a four-year, $23 million contract with nearly $12 million guaranteed. Allen, who isn’t a starter-caliber safety at this stage in his career, received $4 million to sign.

McKenzie will be given a pass if Oakland finds a way to hit on the draft for a second consecutive season. After all, that’s the way he intends to build the team. However, there are other squads around the NFL that simply can’t justify their spending. The Jacksonville Jaguars spent $25 million over four seasons for a cornerback in Davon House who doesn’t have much of a track record of success in the NFL and has started 14 games in four seasons. They also doled out a five-year, $20 million contract to former San Francisco 49ers backup linebacker Dan Skuta. Both may very well be above-average players, but neither is going to be a tremendous difference maker in 2015.

It’s these types of deals that force bottom feeders into having to overpay for mediocre talent on a consistent basis due to their overall lack of success on the field.

5. Chip Kelly Put His Credibility on the Line 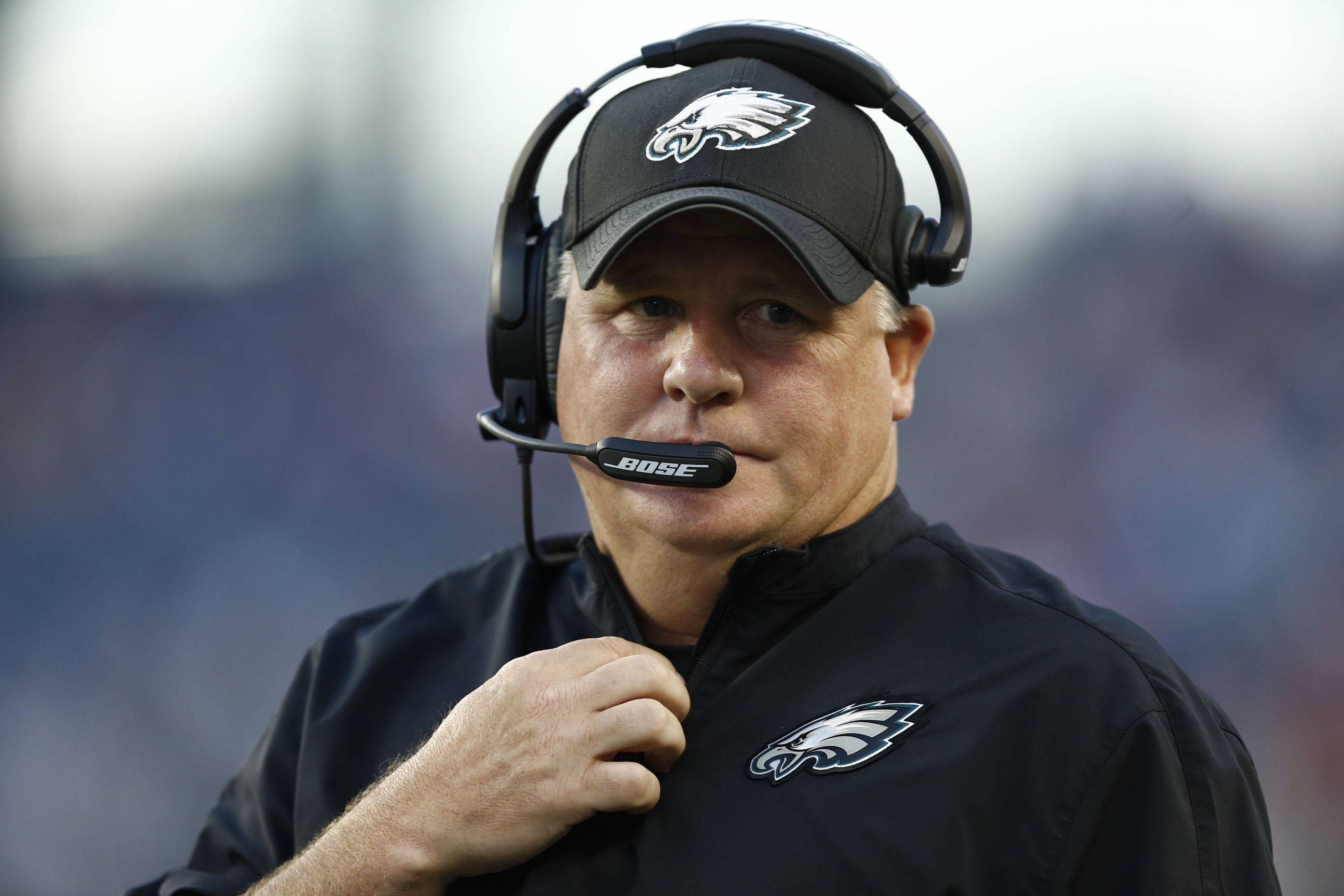 Courtesy of USA Today: Kelly has a lot of people questioning what he’s doing.

No one in their right mind believes that the Eagles offense is better now than it was during the 2014 season. DeMarco Murray and Ryan Mathews are going to make for a solid tandem in the backfield. However, they have missed a combined 21 games over the past three seasons and can’t be seen as an upgrade over LeSean McCoy. New signal caller Sam Bradford has played a total of 23 games during that span. It’s an amazing switch for a team that had talent up and down its skill positions last year. This doesn’t even take into account the loss of Jeremy Maclin in free agency.

We are sure Kelly has something else up his sleeve. What it is remains to be seen. Bradford may very well be trade fodder, and there’s little reason to believe the team won’t add a receiver to play opposite Jordan Matthews in 2015.

However, Kelly’s first offseason as the team’s head of player personnel really does put everything on the line. He’s moving on from the talented core that won 20 games over the past two seasons, and anything short of a division title in 2015 will be seen as a failure. It’s this type of bold decision making that can make or break a franchise over the years. If it’s proven that Kelly’s offseason moves have been a failure, he will become public enemy No. 1 in Philadelphia. That much cannot be questioned.

Byron Maxwell started 17 games in four seasons with the Seattle Seahawks. He was able to turn that into a six-year, $63 million contract with a ridiculous $25.5 million guaranteed. After struggling down the stretch of the 2012 campaign, former San Francisco 49ers cornerback Chris Culliver missed the entire 2013 season with a torn ACL. He then turned around a once fledgling career with an outstanding performance this past season. Despite inconsistency throughout his four seasons in San Francisco, Culliver was able to net a four-year, $32 million contract with $16 million guaranteed from the Washington Redskins.

Lesser-known players also hit the mother-load this past week. Kareem Jackson re-signed with the Houston Texans on a four-year, $34 million contract. Buster Skrine got $25 million over four seasons from the New York Jets. Heck, even a struggling cornerback in Cary Williams netted an $18 million payday from the two-time defending NFC champions. This doesn’t even take into account the quarterback money Darrelle Revis received from a Jets team that doled out $127 million to three corners.

If we needed any more evidence that the NFL is now a pass-first league, this is it right here. Teams are in desperate need to overcome their struggles in the secondary, and last week’s contracts were a prime example of this.

7. So Did Offensive Linemen 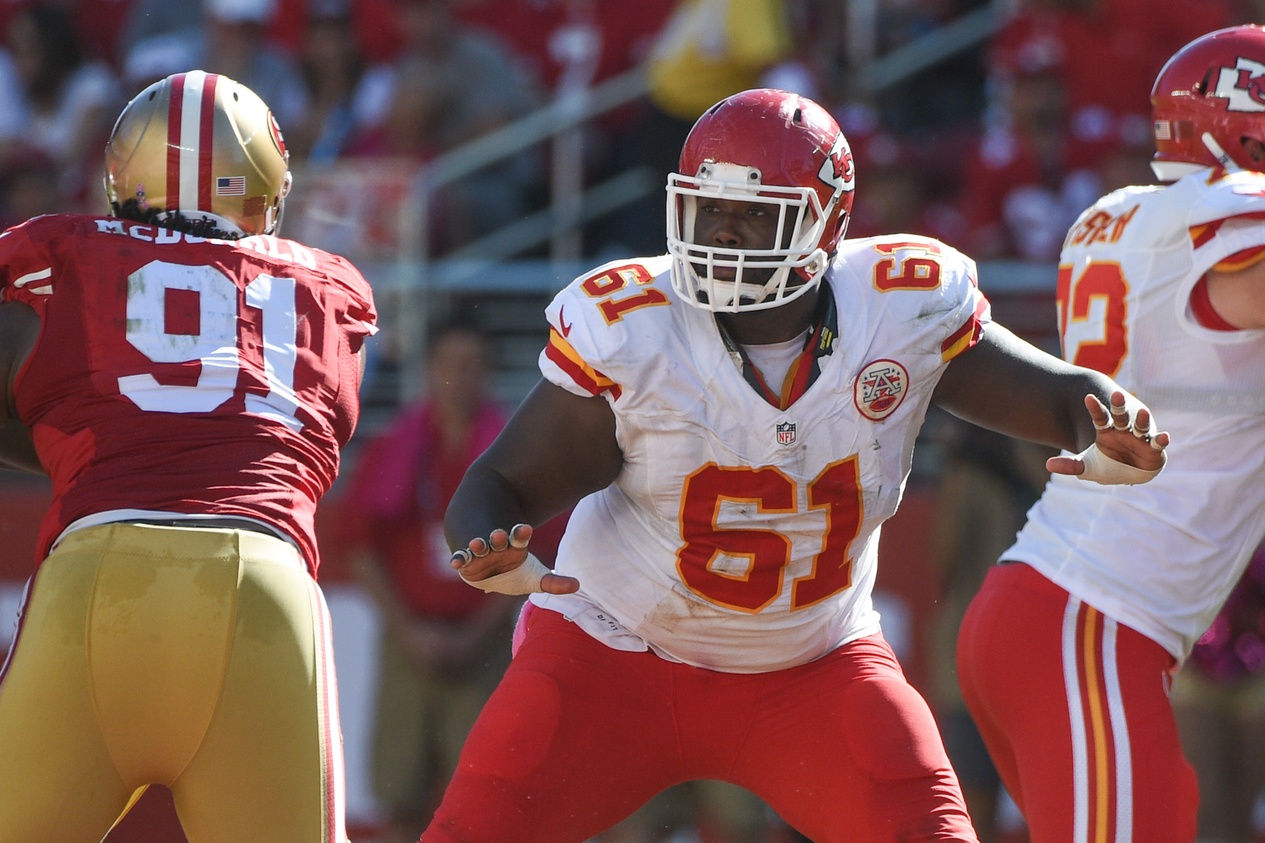 On the other end of the spectrum, teams are in need of actually protecting their franchise quarterbacks in this pass-first league. Interestingly enough, interior linemen were those who got paid this past week. Former 49ers’ guard Mike Iupati received a five-year, $40 million contract from the Arizona Cardinals. This despite the fact that he was among the worst pass-protecting guards in the NFL last year (via Pro Football Focus, subscription required).

The Oakland Raiders gave former Kansas City Chiefs center Rodney Hudson $44.5 million with $20 million guaranteed over five seasons. Prior to last season, Hudson had started 19 of a possible 48 games in Kansas City. He’s now the highest-paid center in the NFL.

Overall, a total of seven offensive linemen received contracts north of $20 million in total value. Of those seven players, only Iupati has appeared in a Pro Bowl thus far. That’s a sign of valuing a position where talent may be thin around the league.

8. The New Orleans Saints are Confused

If you are trying to figure out what the Saints have been doing this offseason, good luck with that. When the Saints traded Jimmy Graham to Seattle, it seemed that they were looking to clear payroll at the cost of short-term contention. However, the Saints recent moves seem to conflict with that perception. They re-signed Mark Ingram to a four-year, $16 million contract and added C.J. Spiller on an $18 million deal over four seasons. The two will combine for an $8.5 million annual salary moving forward. This doesn’t necessarily fit with the idea of cutting payroll.

More than that, New Orleans took on the contract of Dannell Ellerbe in the Kenny Stills trade and signed Brandon Browner to a three-year, $15 million contract. Despite all this, there are even more rumors that other players could be traded. If this is a balancing act between long-term contention and short-term sustainability, it will be interesting to see how everything works out. But for now, it doesn’t seem like the Saints are in any position to contend next year.

This situation will end up becoming the headline around the NFL as the free agent market starts to dry up. Rumors persist that the Arizona Cardinals are making a push for Peterson’s services. Meanwhile, other reports suggest that Peterson wants out of Minnesota. If the two sides cannot mend fences, a trade is inevitable. If they are able to come to some sort of common ground, it could potentially put the Vikings in a situation to contend next season. This was magnified by Minnesota’s acquisition of Mike Wallace and what appears to be a solid core on both sides of the ball.

If Peterson is indeed traded, the entire landscape of the NFC could change. With Peterson on board, Arizona would become a juggernaut in the west, especially after acquiring one of the best run-blocking guards in the NFL in the form of Mike Iupati. If Peterson somehow lands in Dallas, the Cowboys would then take their place among the conference’s elite. Rarely can one player change the dynamic of an entire league, but it appears Peterson could do just that.

10. Tyrod Taylor will Compete for a Starting Job 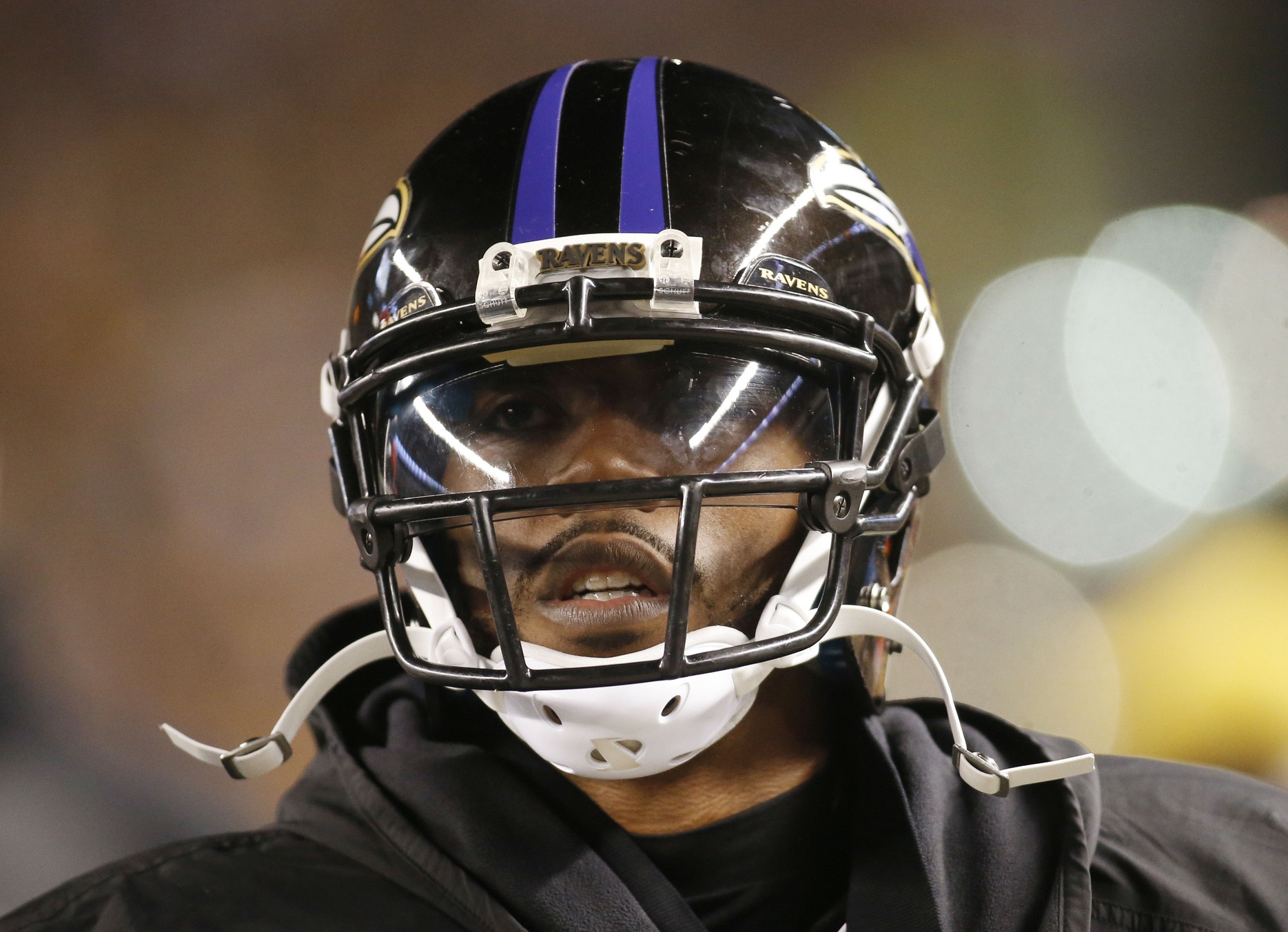 Courtesy of USA Today: Tyrod Taylor will compete for a starting gig?

Here’s a case study when it comes to the lack of serviceable starting quarterbacks in the NFL. Shortly after signing Taylor to a two-year, $7 million contract, it was reported that the Buffalo Bills will give him every opportunity to earn the starting gig. Taylor, a sixth-round pick of the Baltimore Ravens in 2011, has attempted 35 regular season passes in four seasons. With Josh McCown, Ryan Fitzpatrick, Ryan Mallett, Brian Hoyer, Mark Sanchez and Matt Cassel all potentially vying for starting gigs, the talent at quarterback around the NFL may very well be at an all-time low. The possibility that Taylor could even contend for a starting gig only magnifies this further.