10 Takeaways from the NFL Scouting Combine

The NFL Scouting Combine might be a glorified meat market of top draft prospects, but it does weigh in the evaluation process leading up to the annual draft, which is being held in Chicago this year.

More than that, the combine allows teams to meet with both prospects and veterans to discuss a wide array of things. In this, we witness the unofficial start to the NFL offseason.

Here are 10 takeaways from the NFL Scouting Combine in Indianapolis.

1. Jameis Winston and Marcus Mariota Separated Themselves Even Further

If it wasn’t already the case, these two quarterbacks are the only players at that position that are deserving of being first-round picks. Mariota dazzled with an impressive 4.52 40-yard dash, which led all quarterbacks at the combine. In addition to this, the reigning Heisman Trophy winner also impressed throwing the football.

Sports Illustrated’s Doug Farrar broke it down with some solid analysis of Mariota.

Mariota showed particularly quick feet on the 10-yard speed out. He transfers his weight very well from his back foot to his front, and he adjusts to different receivers very well.

The accuracy was definitely there regarding Mariota. More than that, his technique seemed to be in top shape, which is something that scouts were likely focusing on more than generic accuracy

Regarding Winston, he might have had a better all-around combine performance. Again referring to Farrar:

On the deep fade, Winston pulled ahead with his deep arm and a better sense of integrated mechanics. He can zing it downfield, but the ball arrives with good timing. He’s not just throwing bombs with no clue; this is where his accuracy shows up.

This isn’t much of a surprise. Winston is known as the best pure pocket passer to enter the NFL draft since Andrew Luck, so he just lived up to expectations there. And while Winston’s slow 4.97 40-yard dash made news, he’s NOT known for being fleet of foot. Again, that’s not a big deal.

2. We Have No Idea What’s Going on with Sam Bradford in St. Louis

Sam Bradford demanded a trade. Sam Bradford would rather be released than traded. Sam Bradford is the Rams quarterback of the future. The Rams are not planning to trade Sam Bradford. These are just some of the reports that came out during the combine over the past few days. Deciphering fact from fiction here is about as difficult as beating Chris Johnson’s combine record 40 time.

With that said, one thing is clear: Bradford isn’t going to return to the Rams under his current deal. The team will force its former No. 1 overall pick to restructure a deal that currently calls for a ridiculous $16.6 cap hit in 2015.

3. Vic Beasley’s Athleticism will Shoot him up Draft Boards 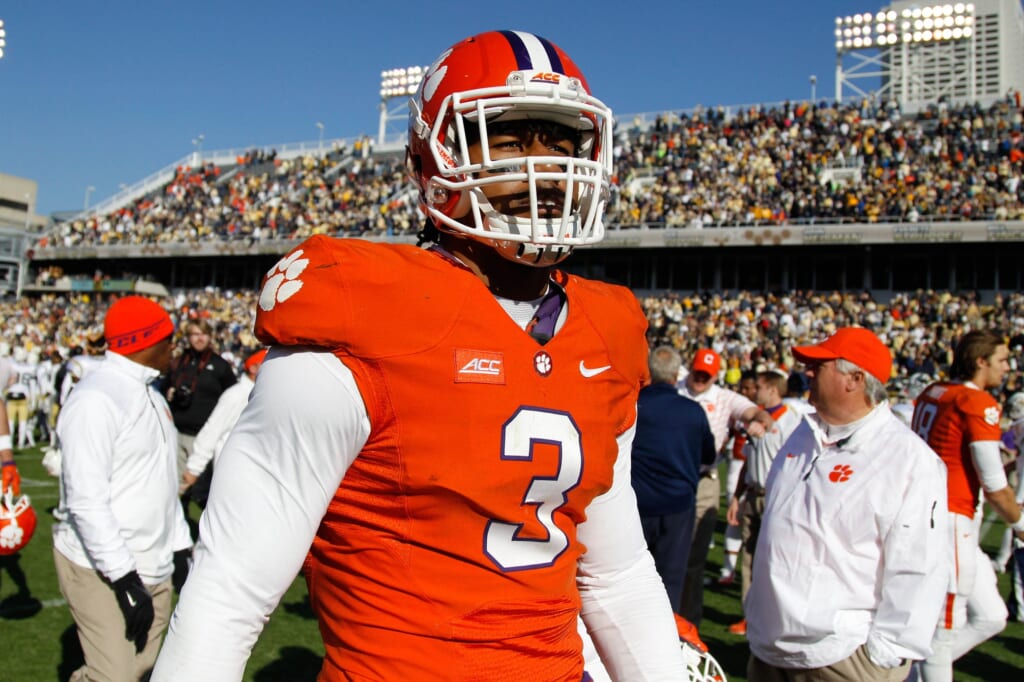 Courtesy of USA Today: Vic Beasley helped himself more than any other player at the Combine.

We will cover 40 times and what exactly they mean a bit later. However, one important performance in this category was Vic Beasley’s ridiculous 4.53 40-yard time. To put this into perspective, that number was lower than what Cam Newton and Colin Kaepernick put up in their combine appearances.

Normally, 40 times should be taken with a grain of salt. That simply isn’t the case here. Beasley’s athleticism affords him the ability to play with his hands down in as a traditional 4-3 defensive end as well as with his hands up as a 3-4 outside linebacker. Regardless, this EDGE talent showed the versatility necessary to skyrocket up draft boards in the two months leading up to the draft. That’s only magnified by an equally ridiculous 4.15 20-yard shuttle.

4. Top Draft Picks Could be up for Trade

Reports came out late last week that the Jacksonville Jaguars are willing to listen on the third pick in the upcoming 2015 NFL draft. While a pick this high in the draft is always valuable, the magnitude of Jacksonville putting the pick on the auction block is huge this year. That’s magnified by the fact that either Jameis Winston or Marcus Mariota is more than likely going to be available with the third overall pick.

Speaking about the possibility of trading down in the draft, Jaguars general manager David Caldwell had this to say:

We had no margin for error these last two years. I think this year we could be more open.

He definitely wasn’t attempting to squash the rumors there. A potential trade partner (mentioned below) are the Philadelphia Eagles and head coach Chip Kelly, who are said to be extremely interested in Mariota. It remains to be seen if this will come to fruition, but it’s something to think about in the coming weeks.

In addition to this, there are suggestions out there that the Oakland Raiders may listen on the fourth pick. With a potential franchise quarterback in Derek Carr already on the roster, Oakland could be in prime position to trade down with a quarterback-needy team. Pure conjecture here, but a team like the New York Jets seem to make some sense.

Leonard Williams is being compared to J.J. Watt. What do you think? pic.twitter.com/da2XZIs9Uw

It’s really not even that close. Based on tape alone, Williams is a generational talent along the defensive line. Based on his combine performance, Williams is by far the best overall prospect in the 2015 NFL draft. Showing an ability to play both inside and outside, Williams absolutely dominated his competition in nearly every category. His position-specific drills were awe inspiring as were his generic drills.

It’s unfair to both parties to compare Williams to J.J. Watt, who is the best defensive player in the NFL in generations. However, that’s the comparison I keep leaning towards. If that’s in anyway the case, there’s absolutely no reason to believe he would fall past the Jaguars (if they don’t trade down at two).

He’s big. He’s long. He’s very athletic and he can really run,” Licht said of Williams. “You can play him in a five-technique, a three-technique. He can come off the edge a little bit.”

That’s the type of player very team in the National Football League could use. Not only does Jacksonville possess the third pick in the draft out of the AFC South, the Tennessee Titans have the second overall pick. Both teams could use Williams as a deterrent to Indianapolis Colts franchise signal caller Andrew Luck within the division. If, for some reason, Williams does fall to four, there’s absolutely no reason to believe that the Raiders wouldn’t draft him to play ahead of rising star Khalil Mack, creating the best young defensive duo in the NFL.

This could actually work against the consensus No 1 wide receiver in the draft, Alabama’s Amari Cooper. If the draft class at wide receiver is seen as stacked, which it is, teams may look to get value later in the first round and early on Day 2. We have seen this story repeated over and over again throughout the years, and it’s a real possibility.

Outside of that point, there are about eight receivers with an opportunity to go in the first round. Along with Cooper, the likes of Kevin White, DeVante Parker and Dorial Green-Beckham are all pretty much locks to go in Day 1. The next tier of receivers: Jaelen Strong, Sammie Coates (overrated), Devin Funchess and Devin Smith could also hear their names called towards the latter part of the first round.

In terms of potential Day 2 steals, the likes of Nelson Agholor, Rashad Greene, Jamison Crowder, Josh Harper and Phillip Dorsett round out one of the deepest wide receiver classes in recent history.

Speaking solely of combine performances, West Virginia’s Kevin White stood out from the group. Showing more athleticism than anticipated for a 6’3″ and 215-pound wide receiver, White dazzled with a 4.35 40-yard dash, which tied for third among receivers in Indianapolis. White’s extra burst of speed has to be seen as a huge benefit considering he possesses one of the best set of hands in the class and a great route-running ability. Those are deadly combinations right there. And in reality, that could turn White into a top-10 pick come late April.

Common logic seemed to suggest that San Francisco was going to let both Frank Gore and Michael Crabtree walk in free agency. Up against the salary cap, the 49ers simply can’t afford to (and shouldn’t) get into a bidding war for these two soon-to-be free agents. However, general manager Trent Baalke broke a bit of news during the combine late last week.

Those talks (Crabtree and Gore) are happening this week. I don’t have the checkbook, so I’m not in those particular conversations, but I do know that leaving San Francisco, heading to the airport the other day, that everything was lined up to talk to all of our people.

It’s interesting that the usually tight-lipped Baalke would go out of his way to indicate that the team is negotiating contracts with two of its best offensive players. It’s also interesting considering previous reports that suggested neither would be returning.

This doesn’t mean that both will be back. Crabtree’s relationship with the organization since being drafted in 2009 has been strained. He’s less likely to be back than Gore, who has a stated interest in returning to the only team he’s suited up for in 10 NFL seasons.

8. In General, 40-Times are Pointless 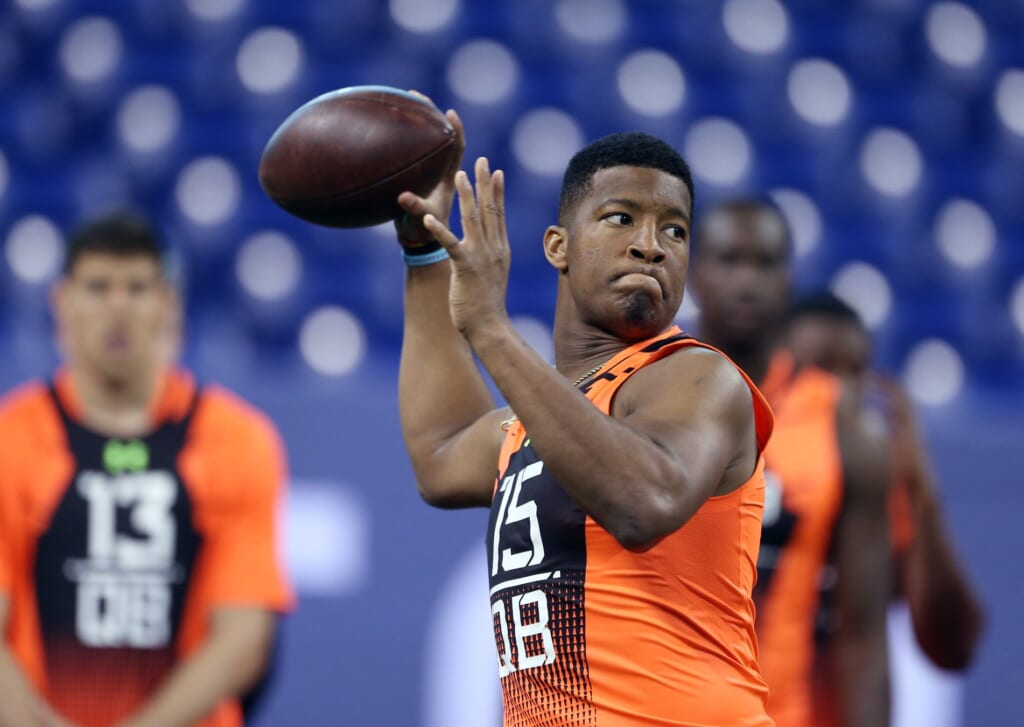 In an appearance on 97.5 the Game here locally on Sunday, I indicated that the 40-yard dash is one of the most meaningless aspects of the evaluation process. With a few exceptions (Leonard Williams, Vic Beasley and Kevin White), this seems to be the general consensus around the scouting community, at least among those who I have spoken with.

Who really cares that Winston ran a near five-second 40? What about former Washington defensive tackle Danny Shelton topping out at 5.66 seconds in his 40? In addition to this, on-field speed is much different than track speed, the latter of which is only utilized during the combine’s 40-yard event. There’s no reason to drop an interior defensive lineman down your board because of a slow 40. And as it relates to a pocket passer like Winston, no one is really going to care if he can’t outrun a linebacker. In reality, the three-cone drill is probably more indicative of a player’s on-field speed.

9. Jameis Winston’s Shoulder Could be a Major Issue

Winston may have performed extremely well in Indianapolis, but the lingering issue for him heading into the draft could be reports regarding an underlying condition with his throwing shoulder. Late last week, Winston’s Q&A with the press was postponed because of an extensive medical check on said shoulder. And now reports are surfacing that teams around the league have worries about his long-term prognosis. We has seen a ton of NFL careers cut short due to shoulder issues. Let’s hope this isn’t the case with the former Heisman winner. The good news here is that a later reports indicated teams aren’t overly concerned about Winston’s shoulder. Adding more good news, NFL Media’s Albert Breer recently said that his shoulder issue is common for baseball pitchers. Remember, Winston played on Florida State’s baseball team. 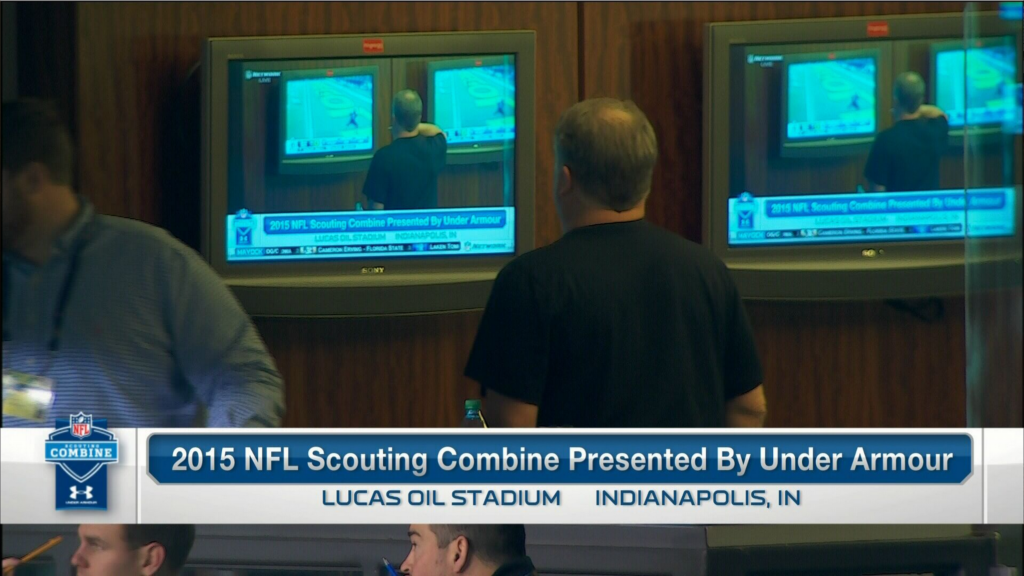 There’s little doubt that Philadelphia will look to trade up for Oregon quarterback Marcus Mariota. With his new gig as the team’s head of player personnel (general manager), head coach Chip Kelly watched intently as his former pupil at Oregon performed during the combine in Indianapolis.

With the 20th pick in the draft, it’s likely that the Eagles could have to trade a combination of players and high-value draft picks to move up into the top 10 and select Mariota. Heck, they might have to move all the way up to No. 2 overall to guarantee themselves Mariota. Is that a bounty the Eagles are willing to pay? If Kelly’s presence in Indianapolis is any indication, the answer is a resounding yes.