5 Overreactions From Week 2 of the NFL Season

Fans and writers alike tend to overreact early in the NFL season. We saw this last week when the Miami Dolphins defeated the New England Patriots (raises hands). And we have seen it this week with the Seattle Seahawks as well as the San Francisco 49ers falling to lesser teams.

One game in the month of September isn’t going to make or break a season. Russell Wilson and Co. falling on the road in their second regular season game doesn’t mean that they are not going to be around come December.

In addition to this, a 2-0 start (see the Buffalo Bills), doesn’t necessarily mean the team is headed to the playoffs for the first times since the Clinton Administration.

Let’s check in on five overreactions from the second week of the 2014 NFL season.

They are also tied for second place. Fans of both teams are overreacting after pretty bad Week 2 performances. Seattle lost 30-21 against the San Diego Chargers in the sweltering heat of Southern California. And the defending Super Bowl champions were lucky it was that close. A blown call by the officials (a theme of the first two weeks) led to a Percy Harvin 51-yard touchdown in the second quarter. On replay, it was rather obvious that Harvin stepped out of bounds outside of the 20-yard line. 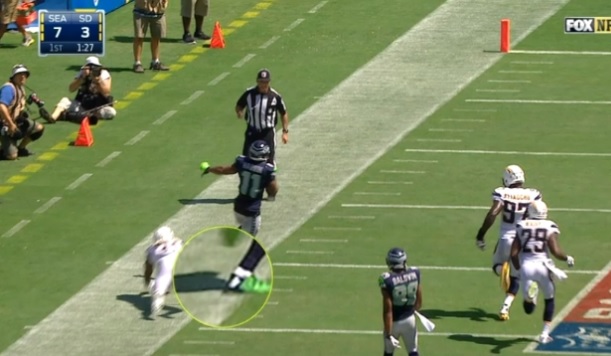 Outside of that one score and a last-minute drive in the first half in which Russell Wilson was downright amazing, Seattle’s offense did not do a whole heck of a lot. It was, however, the Seahawks defense that laid the proverbial egg here. Philip Rivers completed 28-of-37 passes for 284 yards and three scores. He was sacked just one time and compiled a quarterback rating of 124.2. Heck, even Richard Sherman had his issues against Keenan Allen, who caught five passes on six targets.

But the idea that Seattle is in trouble after two weeks is absolutely ridiculous. This game may very well show us that Pete Carroll’s squad can be beat on the road and that their defense isn’t the “greatest ever.” That’s about it right now. There is no reason for fans in the Pacific Northwest to panic at this point. It’s one road game in the month of September.

Opening up their new digs in Santa Clara, the 49ers looked ready to dominate Chicago. An early blocked punt led to a Michael Crabtree touchdown. And after the third quarter of play, San Francisco led 20-7. Completely falling on their face, Jim Harbaugh’s squad self destructed in the final stanza, allowing three consecutive Bears touchdowns in route to a 28-20 loss at Levi’s Stadium. Kaepernick turned the ball over four times, the team committed 16 penalties and horrendous clock management doomed them towards the end.

All said, the 49ers should be embarrassed about their Week 2 performance. Then again, there were many different situations in this game in which the officials absolutely blew calls. After all, two teams don’t combine for 26 penalties in a football game unless the officials are calling the game tight. One particular play in the second quarter with San Francisco up 10-0 comes to mind. Frank Gore blasted through the line for a 54-yard touchdown run. However, the officials mistakenly called Anquan Boldin for a holding penalty. Kaepernick fumbled on the very next play, leaving the 49ers without any points.

#49ers Anquan Boldin says holding penalty on Gore's 54 yd TD run a "fluke". Does not know what the ref saw but said contacts may be needed

Let’s make no mistake about it. San Francisco lost because it turned the ball over four times and committed a ton of legitimate penalties. All said, it wasn’t a great night for a 49ers team that was looking to go one game up on the Seahawks through two weeks. This doesn’t mean the season is over or that Jim Harbaugh’s team is in shambles. As with the Seahawks, it’s one game in mid September.

Why not? These two teams have been among the most impressive in the NFL through two weeks. Arizona went into New Jersey and defeated the Giants without the services of Carson Palmer. Meanwhile, Buffalo took out a Miami Dolphins team that was riding high following a Week 1 victory over the New England Patriots.

If the Super Bowl were being played in September, E.J. Manuel would likely be representing the AFC, while Bruce Arians squad would be considered a much better team than both Seattle and San Francisco. The good thing about the NFL season is that it is two weeks long and we are highly unlikely to see Manuel taking snaps in Arizona for Super Bowl XLIX. 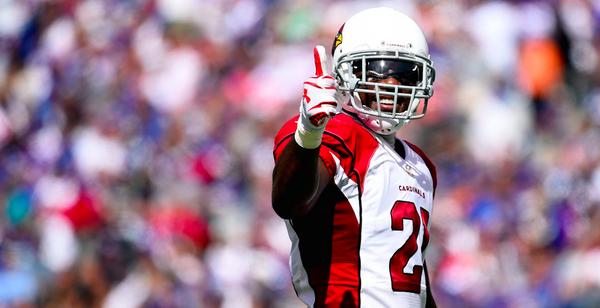 Courtesy of Fox Sports: It might be thumbs up for Arizona right now, but let’s wait to see where this team is in a month.

As it relates to the Cardinals, they have played some mighty fine football over the first two weeks of the season. But we have absolutely no idea how long Palmer is going to be sidelined with nerve damage to his throwing shoulder. We also can’t discount that fact that this team is missing three key players on the defensive side of the ball from a year ago and is playing in the NFC West. If Arizona handles San Francisco next week in the desert, maybe come back and address this. Until then, pretty much everything is an overreaction through two weeks.

3. NFL Will not Complete 2014 Season Due to too Many Injuries 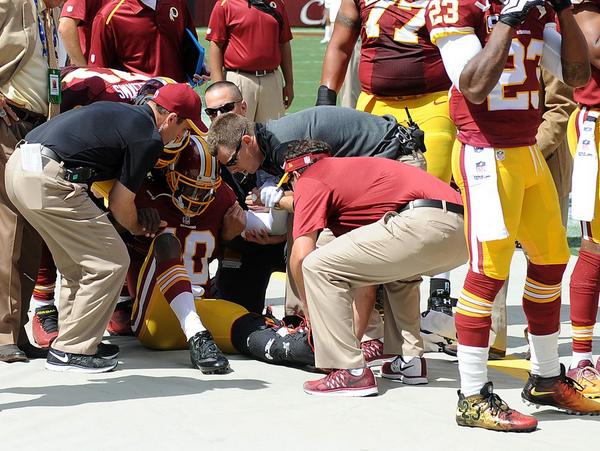 Courtesy of ESPN: Injuries have been a story early in the season.

All the focus has been on the off-field issues with Ray Rice and Adrian Peterson. Lost in this is the fact that a ton of star players went down with injuries on Sunday.

Robert Griffin III, Knowshon Moreno, Jamaal Charles, A.J. Green, Ryan Mathews, Charles Tillman, Vernon Davis, Tavon Austin and Gerald McCoy all went down with fairly significant injuries on Sunday. While some injuries (see RGII) seem more serious, the expectation here is that each one of these players could miss some time.

This doesn’t even include numerous players who were inactive on Sunday and others who are likely to miss the remainder of the season after suffering injuries during the opening week of football.

With that said, this happens every single season. Teams find themselves behind the proverbial eight ball early in the year and have to overcome it. Short of missing a franchise quarterback (see Aaron Rodgers last year), teams are also expected to utilize the next-man up philosophy. So don’t worry, all 32 teams will be able to field full rosters as the season progresses and the football season WILL NOT be cancelled. 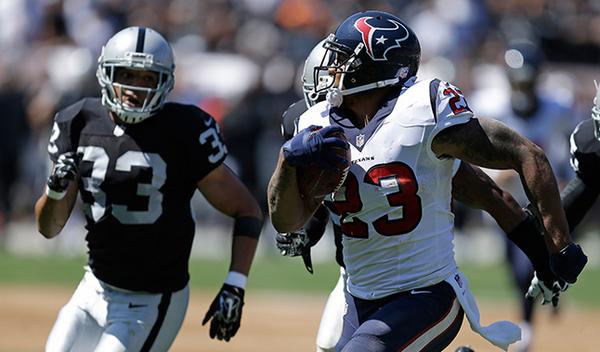 Courtesy of Fox Sports: Don’t expect Houston to run away from the competition moving forward this season.

Remember when the Texans started last season 2-0? That seems like so long ago. But two weeks into the 2014 season, Houston has duplicated that very same record. While the team has been much more impressive than it was during those first two games last season, let’s not get ahead of ourselves here. Houston has defeated the likes of the Washington Redskins and Oakland Raiders. Just wait until they go up against the tougher part of their schedule before making snap judgements about Bill O’Brien’s squad. If Houston boasts a better record than Seattle and San Francisco when January rolls aroud, I’ll make sure to come back to this very same site and post a picture of myself in a Texans cheerleaders uniform. Bookmark this, I promise to follow through here.

5. Kirk Cousins is a Better Option Than Robert Griffin III 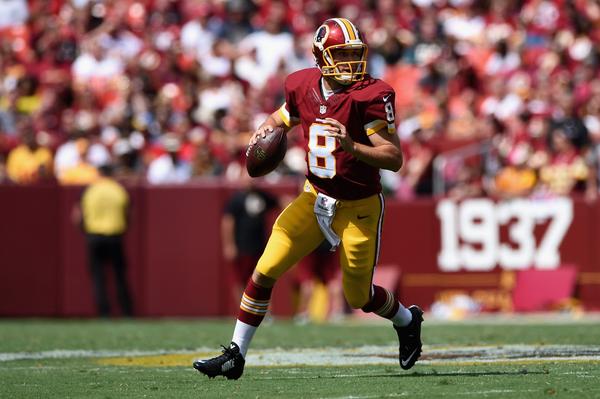 While Cousins might have come in and helped the Redskins score 41 points against a lowly Jacksonville team on Sunday, he is most definitely not the better long-term option. Even I fell victim to Cousins’ outstanding performance on Sunday, but we need to take a step back here. First off, RGIII’s injury was just plain gruesome to watch and he might very well miss the remainder of the season. But that is in no way an indication that Cousins is a better option for the Redskins down the road.

The Michigan State product has now thrown 10 touchdowns compared to 10 interceptions in nine career games (four starts). Let’s see Cousins perform at a high level over the course of multiple games before concluding that he’s going to replace RGIII, who led the Redskins to a playoff appearance two years ago and cost the team quite the bounty in a trade with the St. Louis Rams. Come back to this article in November and see where we are.