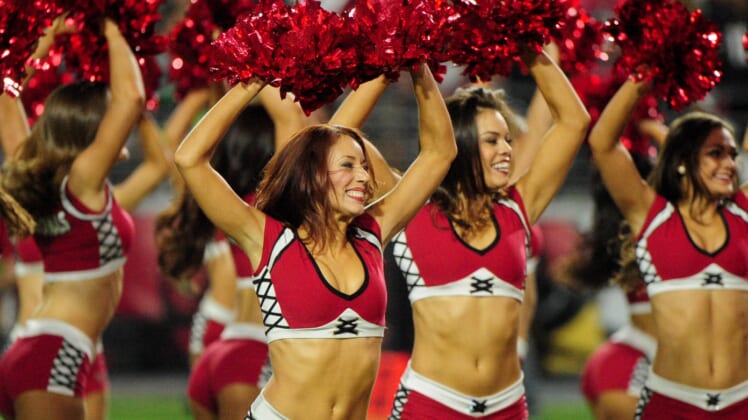 We previously looked at 10 high NFL Draft picks from this year’s class set to disappoint as rookies. While that was a negative look at some of the best-known youngsters, we’re now going in a different direction.

The Arizona Cardinals need wide receiver help. This means that fourth-round pick Hakeem Butler could step into a prominent role. Meanwhile, NCAA’s leading career sack-getter Jaylon Ferguson is in a perfect situation with the Baltimore Ravens.

These are among the 10 NFL rookies set to surprise this coming season around the league.

Arizona is in need of wide receiver help with Larry Fitzgerald getting up there in age and without much proven talent behind him. Enter into the equation this big-bodied 6-foot-5 pass catcher from Iowa State. Butler surprisingly dropped to the fourth round of April’s draft. Given how much he dominated the Big 12, one could easily say he was the steal of the annual event.

The opportunity is certainly going to be there for Butler to put up some solid numbers catching passes from fellow rookie Kyler Murray this season. We would not be surprised to see him rack up north of 800 yards with a half dozen scores.

As we saw with Quenton Nelson last season, guards have an easier go of it than players at other positions in making an early impact. Boasting a dominant frame and some extra nastiness for such a young guard, Ford will likely follow in Nelson’s footsteps as a rookie.

The 6-foot-4, 329-pound lineman could even potentially start at right tackle for the Bills as a rookie. While that might be a tougher spot, he’s more than proven himself capable from a pass-blocking perspective. If Ford excels in this area, it will be a major boon for young quarterback Josh Allen. If not, Buffalo can keep him inside without an issue. Best of both worlds.

Most had the 6-foot-1 Brown pegged as a first-round pick leading up to April’s NFL Draft. His performance at Mississippi coupled with plus-level route-running skills made him a draft crush of many.

Unfortunately for Brown, he lasted all the way to the end of the second round. His loss represented significant gain for the Titans, who are in need of another pass catcher behind Corey Davis. We’re fully expecting Brown to at least find himself as Tennessee’s No. 3 receiver. If so, he’ll make a solid initial impact.

One of the best pure safeties in the 2019 draft class, it was a surprise to see this Virginia product drop to the end of the second round. He has the ability to play both safety positions and should start next to the recently signed Tyrann Mathieu as a rookie.

There’s sure to be a learning curve here. But with Mathieu’s presence and Thornhill’s ball-hawking skills, we would not be surprised if the rookie put up four-plus interceptions in his initial NFL season.

Not as highly coveted as former teammate Saquon Barkley, Sanders rose up the draft boards leading up to the annual event in April. He would ultimately land in a good spot with Philadelphia late in the second round. At 5-foot-10 and 211 pounds, Sanders has everything you look for in a three-down back.

While fellow recent acquisition Jordan Howard will likely get the start in Philly, we would not be surprised to see Sanders touch the ball 10-plus times per game. Here’s a guy that averaged nearly six yards per touch last season. He can be electric with the ball in his hands. Look for big things from Sanders as a rookie.

We’re fully expecting Winovich to have a much larger initial impact than higher drafted former teammate Rashan Gary. Winovich is in a great situation learning from veteran Michael Bennett on a defense that’s made for him under Bill Belichick.

Winovich’s success at Michigan also seems to suggest a solid rookie season with the Pats. He recorded 34.5 tackles for loss and 13.5 sacks in his final two seasons with the Wolverines. We would not be surprised if he went for six-plus sacks as a rookie.

When San Francisco struck out in adding a top-end receiver either in free agency or via a trade, it became clear that the team would be relying on young talent. That included then-rookie Dante Pettis and record-breaking tight end George Kittle last season.

We’re expecting much of the same from Samuel in 2019. The South Carolina product boasts the best route-running ability of the entire draft. He could come in and start at the slot with Marquise Goodwin and Pettis on the outside. Given all of the talent on the 49ers’ offense, that should lead to a breakout initial season in Northern California.

New Orleans’ secondary is absolutely staked with young talent. That includes cornerbak Marshon Lattimore as well as safeties Vonn Bell and Marcus Williams. All three were instrumental in the vast improvement this team saw on defense last season.

Enter into the equation a versatile defensive back in Gardner-Johnson who could play both cornerback and safety at the next level. He’s a ball hawk in the truest sense of the term and should be able to make an immediate impact.

Even if he is 100 percent healthy, Todd Gurley will be on a pitch count this coming season. That’s one of the primary reasons Los Angeles selected the ultra impressive Henderson in the third round of April’s draft.

The 208-pound Henderson recorded 2,204 total yards at a clip of 9.5 yards per touch with Memphis last season. He’s the perfect change-of-pace back to Gurley and should shine in Sean McVay’s offense this season.

The NCAA’s all-time leader in sacks, Ferguson still somehow flew under the radar leading up to the 2019 NFL Draft. He was ultimately selected in the third round by a Ravens team that needed more youthfulness in the defensive front seven.