As the NFL prepares for Week 2 of the season, there’s a whole lot of numbers and stats we can look at that defined the initial slate of action.

From both the Atlanta Falcons and San Francisco 49ers struggling in the red zone to Aaron Rodgers’ brilliant comeback against the Bears, trends were seemingly started around the league. Meanwhile, Adrian Peterson turned back the clock some eight years in his Redskins debut.

These are among the 10 most ridiculous stats heading into Week 2 of the NFL season. 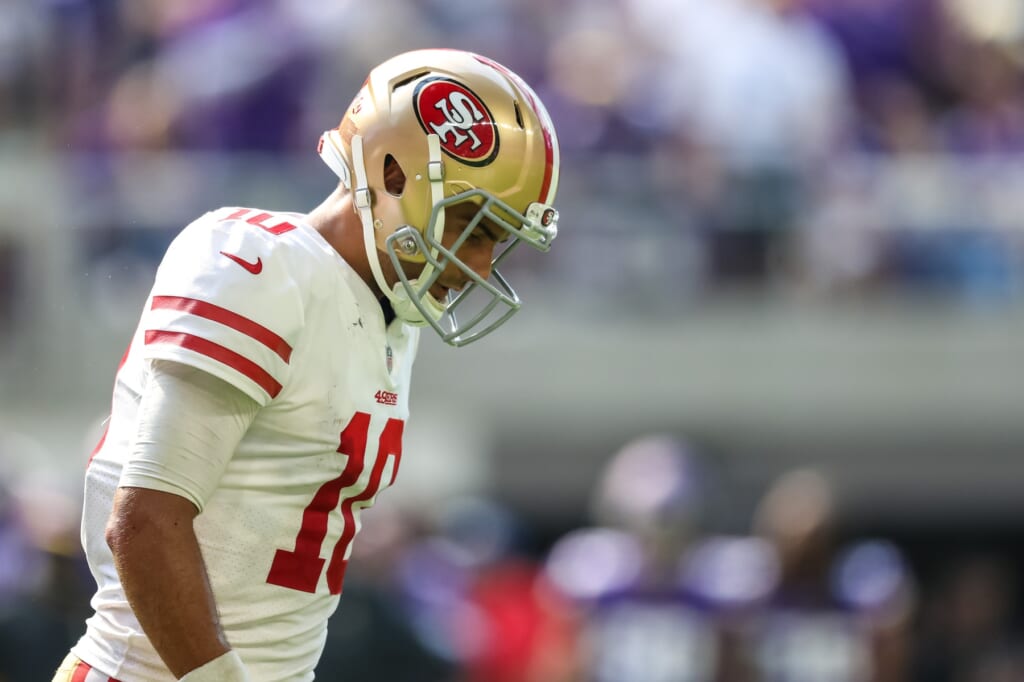 It started Thursday night when the Atlanta Falcons converted on just 1-of-5 red-zone opportunities in a narrow loss to the defending champion Philadelphia Eagles. Then, on Sunday, the San Francisco 49ers put up one touchdown in five trips to the red zone, accounting for a total of 16 points. The Falcons themselves scored 10 points in five trips. That’s 26 combined red-zone points for the two teams on 10 trips inside the opponent’s 20-yard line. Both teams are considered playoff contenders. And both must rectify this in Week 2.

It didn’t take a genius to figure out that Seattle would have issues protecting Russell Wilson on the road against Von Miller and the Denver Broncos last week. Even then, what we saw from the team’s offensive line was absolutely brutal. Wilson was hit 10 times and sacked six times while throwing just 33 passes. This means he was hit on more than one quarter of his dropbacks. Ouch. Unfortunately, it won’t get easier against Khalil Mack and the Chicago Bears on the road this week.

Michael Thomas is a robot 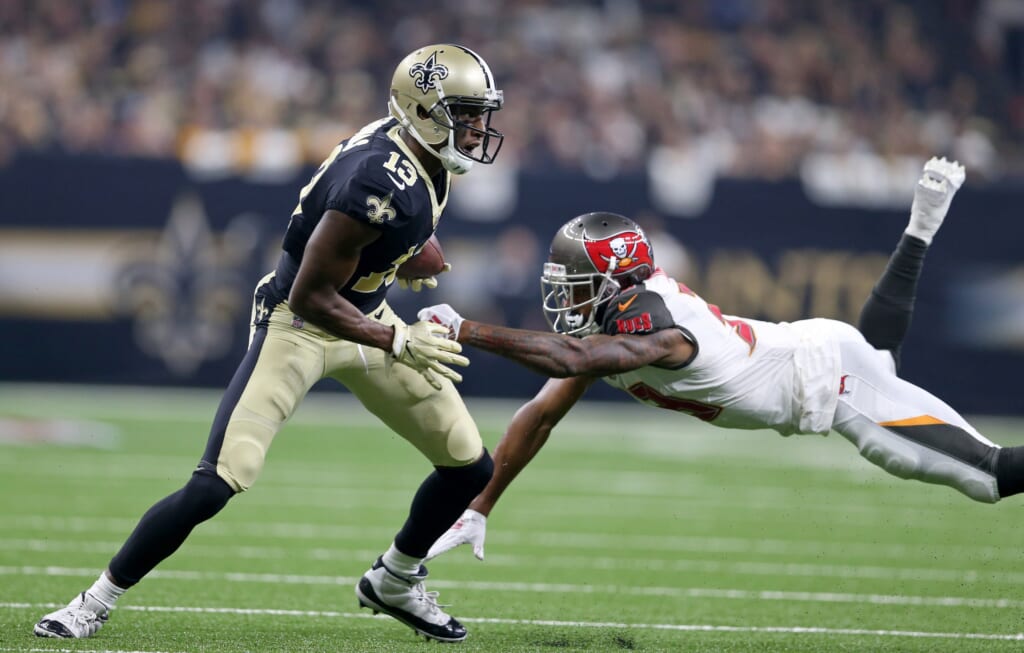 Lost in Tampa Bay’s shocking 48-40 road win against the Saints in Week 1 was the fact that third-year Saints wide receiver Michael Thomas went off to the tune of 16 receptions for 180 yards and a touchdown on 17 targets. Folks, he caught 94.1 percent of the passes Drew Brees threw in his direction. After having put up a 70-plus percent catch rate in his first two NFL seasons, it’s readily apparent that Thomas is already one of the most-productive receivers in the game. Heck, he might be among the most dominant.

There’s no other way to go about it. Mr. Rodgers is your early-season MVP favorite. What he did while hobbled en route to leading Green Bay back from a 20-0 deficit against the Chicago Bears last week was nothing less than legendary. It included Rodgers completing 12-of-14 passes for 240 yards with three touchdowns in the Packers’ final three possessions. That’s simply something we can’t make up. And it has Rodgers entering GOAT status. 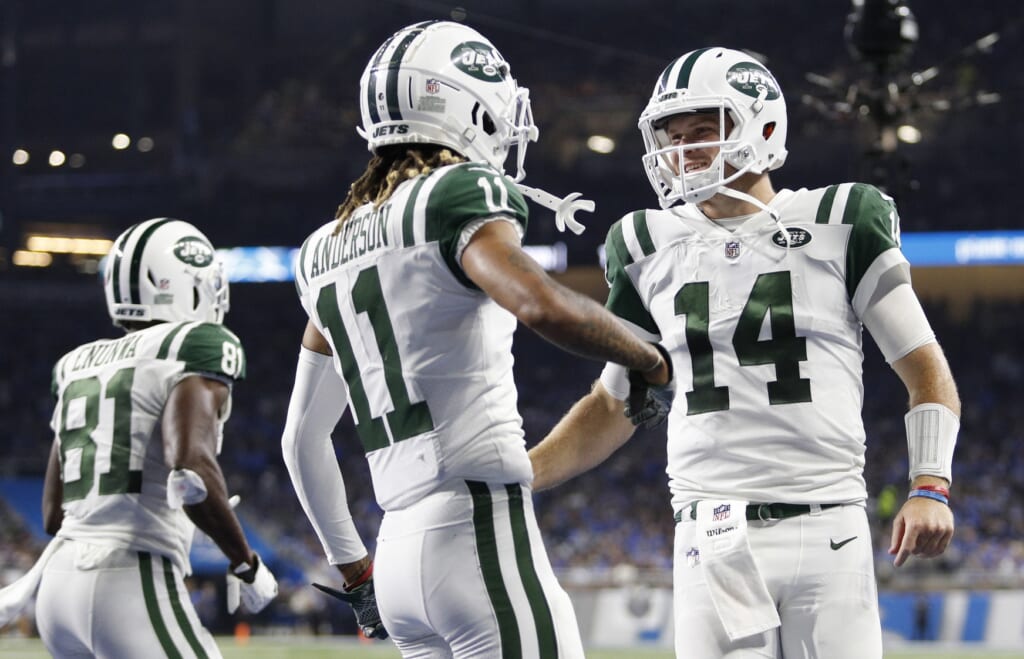 Heading into Week 1’s action against the Detroit Lions, the New York Jets had scored 31-plus points in five of their past 32 games. They matched that total in a third quarter against a defense that had yielded 31-plus points just 10 times since over the past four seasons. It included two scores on offense as well as both a touchdown on defense and special teams. Shockingly, New York won the game by those 31 points despite the total yardage being nearly similar and Detroit gaining more first downs.

Not only is Tampa Bay tied for the most points in the NFL, it heads into Week 2 averaging 529 total yards of offense following an exhilarating road win against the Saints on Sunday. It’s the most yardage Tampa Bay has put up in a game since all the way back in 1980. It came with backup Ryan Fitzpatrick under center against a Saints team that finished last season in the top 10 in points allowed. Tampa Bay also put up a franchise rerecord nine plays of 20-plus yards. It’s hard to tell if this was more a product of the Buccaneers offense or New Orleans defense. But it was eye-opening.

Adrian Peterson still has it 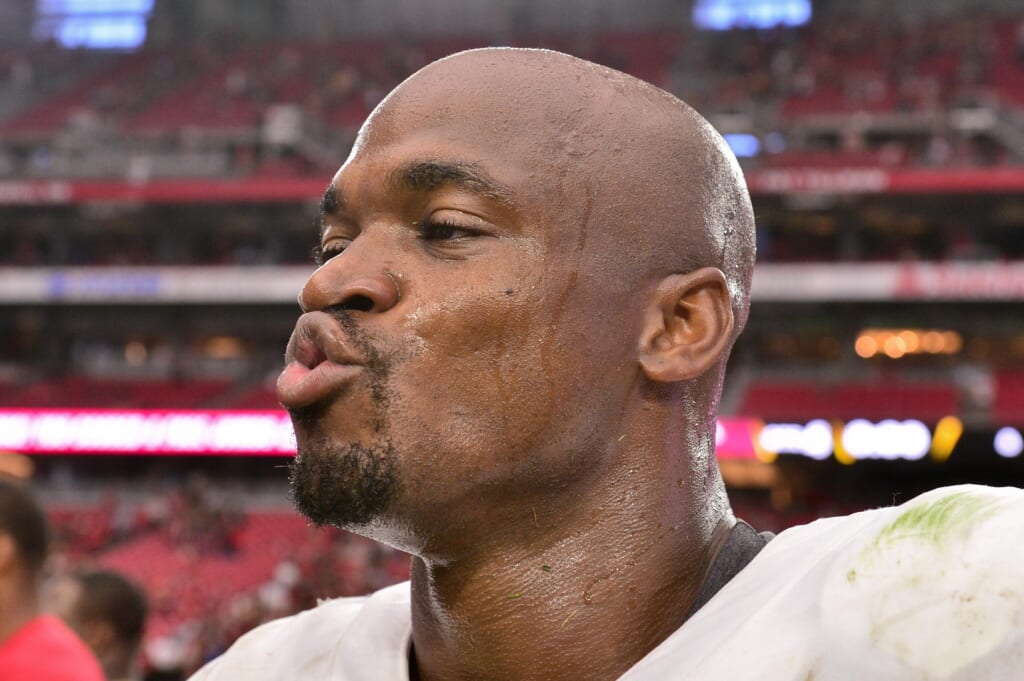 Signed off the street after the season-ending injury to Derrius Guice, this future Hall of Famer was absolutely brilliant in his regular season debut with Washington. It’s a game that saw Peterson put up 166 total yards and a touchdown on 28 touches. That included 70 receiving yards from a running back that has never topped 436 receiving yards throughout his career. It’s too early to tell whether this will continue. But AD can thrive against the Indianapolis Colts defense this week.

This Oakland Raiders’ starter completed 29-of-40 passes for north of 300 yards in Week 1 against the Rams. On the surface, that might seem solid. That’s until we realize Carr threw three interceptions without a touchdown, including a pick-six late in the fourth quarter. The shocking stat here is that Carr completed 5-of-9 passes for 43 yards with two interceptions when targeting wide receivers. That’s a 28.7 passer rating. Remember, it was just two seasons ago that Michael Crabtree and Amari Cooper caught a combined 172 passes for 2,156 yards. Whew. 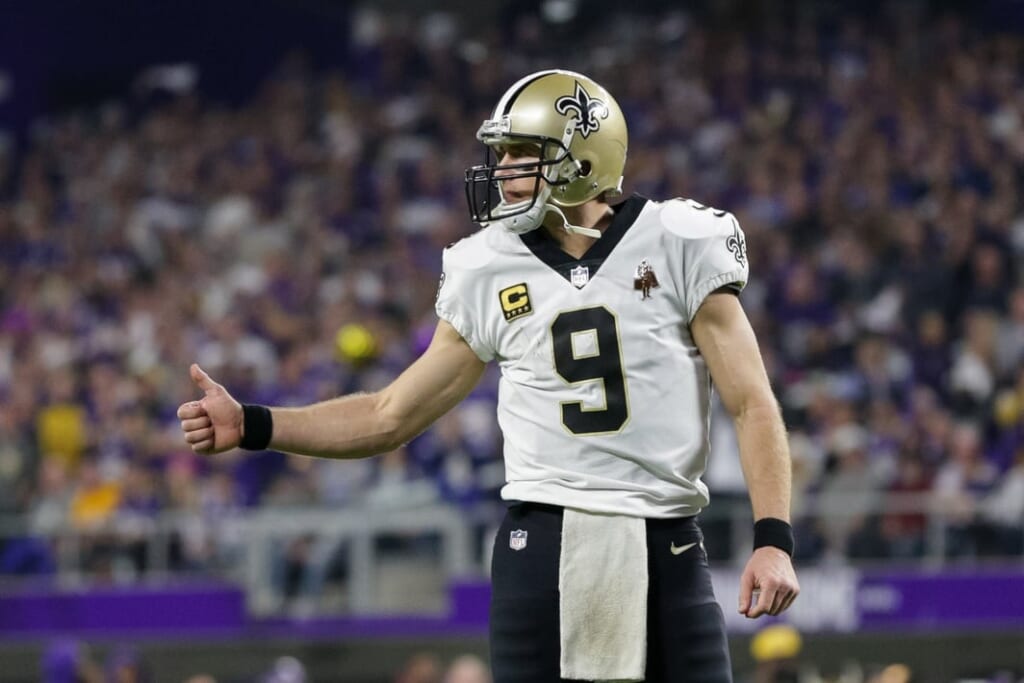 One game means very little in the grand scheme of things. We can’t project further into the season based on such a small sample size. Even then, this Saints quarterback once again finds himself on a record-setting pace. In throwing for 439 yards and three touchdowns on 37 completions against Tampa Bay, Brees is on pace to throw for north of 7,000 yards and complete 592 passes. Both would be NFL records. Those numbers won’t be close to being met. It’s still fun to look at. After all, Brees boasts five of the top eight single-season yardage marks. This could be the season he breaks Peyton Manning’s record.

T.J. Watt is a monster

It’s possible this second-year stud could ultimately be a better football player than his older brother and three-time NFL Defensive Player of the Year, J.J. Watt. The Pittsburgh Steelers’ EDGE rusher recorded seven sacks during a promising rookie career. How did he follow that up Week 1? Well, by recording 11 tackles and four sacks while blocking a game-winning field goal attempt by the Cleveland Browns in overtime. All said, Watt hit Browns quarterback Tyrod Taylor six times in the tie game. Whew.