Game 1 of the 2018 NBA Finals between the Golden State Warriors and Cleveland Cavaliers will tip off Thursday evening in Oakland. It’s the fourth consecutive year these two teams have matched up in the championship round. It also brings a ton of storylines.

Embedded within those storylines are major questions surrounding both teams. Will Tristan Thompson be a factor for the Cavaliers? Can Kevin Love prove himself to be a legitimate No. 2 scoring option behind LeBron James?

Out west, the Warriors are dealing with an injury to former NBA Finals MVP Andre Iguodala. How will that impact the team? These are among the top 10 storylines heading into the 2018 NBA Finals.

Will Tristan Thompson be a factor? 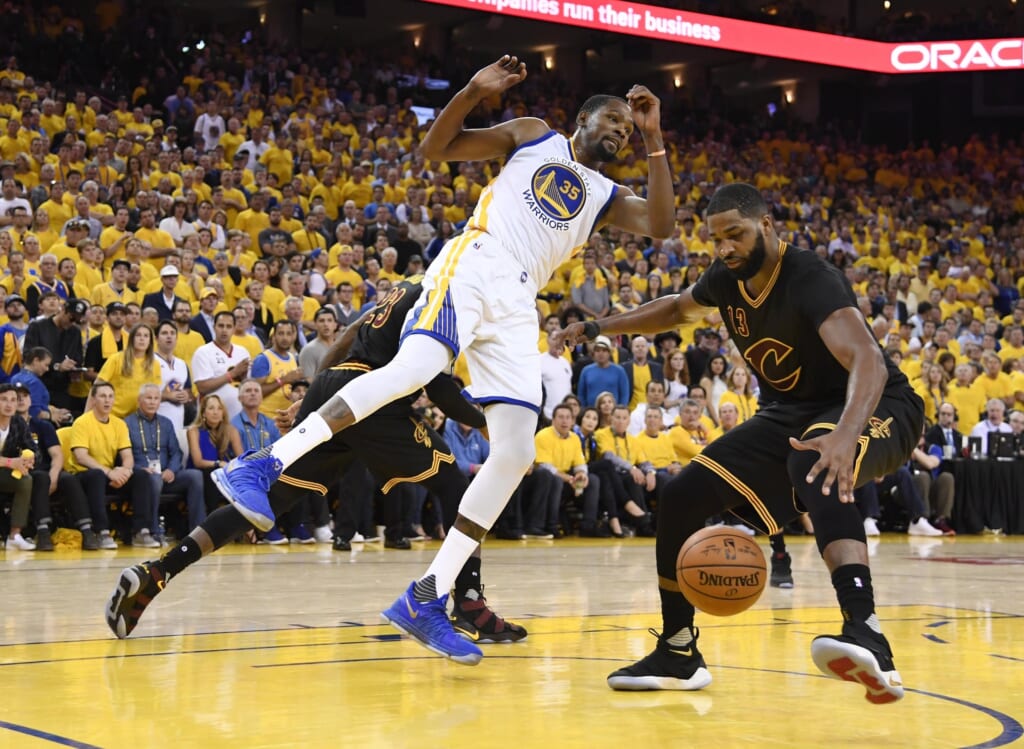 Last year’s NBA Finals saw Tristan Thompson average north of 26 minutes per game. That’s actually a lot more work than he put in during the 2017-18 regular season. In those five games, Thompson averaged 5.6 points and 5.8 rebounds. It’s not necessarily about the stats here. Instead, it’s all about the impact he should make on the defensive end of the court.

Among regular Cavs players, Thompson ranked just fifth in defensive rating against the Warriors last June. Cleveland was also minus-41 with him on the court. That’s an issue. He’s expected to change the entire dynamic defensively. That didn’t happen. And in reality, it could impact the role Thompson has this year.

How do the Warriors utilize the center position?

How Cleveland decides to use Thompson won’t have much of an impact on the Warriors’ plans at center. As he’s proven in the past, former Defensive Player of the Year Draymond Green can go at it with Thompson from the center position. Instead, this is all about what Steve Kerr does with JaVale McGee and Zaza Pachulia. They’ve played a combined 123 minutes in 17 playoff games this year. In fact, Jordan Bell and Kevon Looney have played much more significant roles.

Kerr has noted that it’s been all about matchups, especially for a player in Pachulia who has logged a grand total of 20 minutes. This could very well be different against Cleveland. The two combined for 6.0 points and 5.3 rebounds in about 17 minutes of action in the Finals last year. For his part, Pachulia finished minus-four in his 66 minutes. Needless to say, that will play a role in what Kerr does with these two.

What roles will Jordan Clarkson and Larry Nance play?

Outside of flashes from George Hill, the three players Cleveland acquired in separate deals during February’s trade deadline did not play huge roles in the team’s run to the Finals. Both Clarkson and Nance averaged less than 13.5 minutes of action, putting up a combined 9.6 points in the Eastern Conference Finals. For his part, Clarkson shot just 30 percent from the field.

In order for Cleveland to have a chance against Golden State its supporting cast must step up big time. This could very well include an athletic Nance playing a similar role as what we saw from Rockets forward P.J. Tucker played against Golden State in the conference finals. The idea would be to create offensive rebounds and extra possessions for the Cavaliers.

How will Andre Iguodala’s injury impact the series? 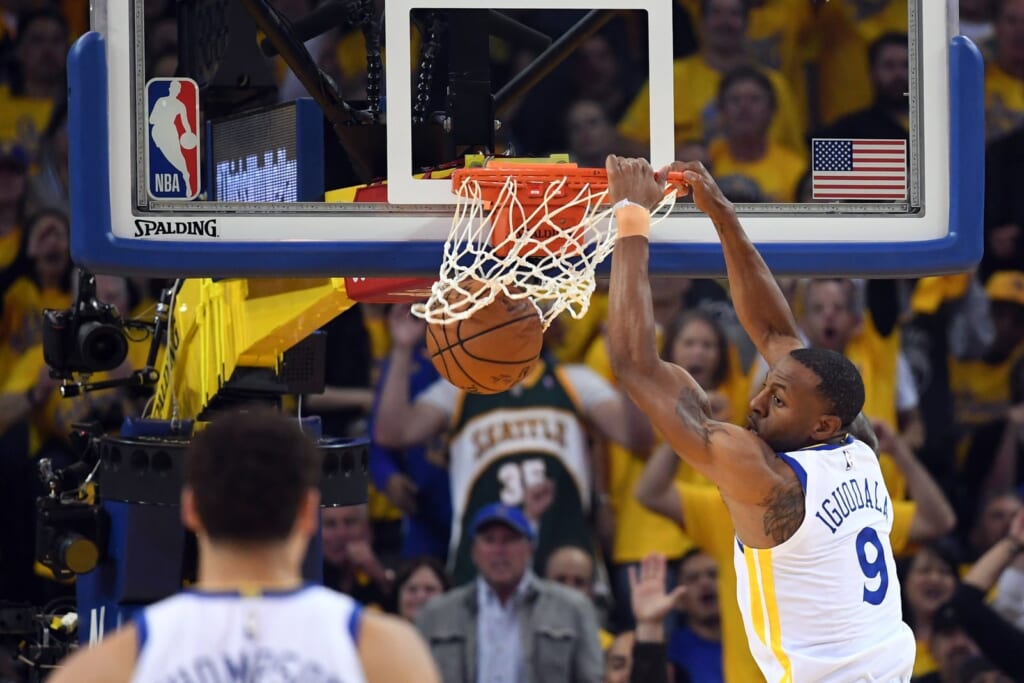 Already ruled out for Game 1 with a leg contusion and bone bruise, Iguodala will be evaluated again prior to Game 2. He’s now set to miss a fifth consecutive game. In no way can this be considered small news. A former NBA Finals MVP against these very same Cavaliers, Iggy has the best track record in terms of guarding King James. Given that Golden State was plus-60 with Iggy on the court in last year’s Finals and minus-26 with him sidelined, this isn’t a small injury.

We’ll focus a bit later on Golden State’s plans to guard James, but it’s readily apparent that Cleveland will decide to go iso-heavy with James early in the series. It could be similar to what we see with Houston pitting James Harden against the likes of Kevon Looney and Jordan Bell. That has to be a frightening idea for fans in the Bay Area.

How do the Cavaliers plan on going after Stephen Curry?

Houston went directly at Curry a ton with Chris Paul and James Harden during the Western Conference Finals. Shockingly enough, it really didn’t work out in the Rockets’ favor. Considered a weak link among Golden State’s core group, Curry stepped it up big time defensively. He actually held Harden to under 40 percent shooting when guarding the likely NBA MVP.

It’s a different monster against Cleveland. There’s certainly a chance that the Cavaliers look to isolate James against Curry, at which point the two-time NBA MVP will have zero chance in one-on-one situations. That’s where help can come from the weak side, enabling James and his elite-level passing ability to find teammates for wide-open threes. It’s going to be an intriguing mental match between all key parties involved.

This isn’t the Warriors’ game. As one of the most accomplished teams in NBA history, the defending champs are known more for their ball movement. Here’s a squad that averaged nearly 30 assists during the regular season. Going isolation isn’t what we’d call a strong suit. But throughout the Western Conference Finals, that’s exactly what Kerr and Co. did with the reigning NBA Finals MVP.

For the most part, it bogged down Golden State’s offense. Though, there were times in which this was effective. That included the fourth quarter of Game 7 against Houston. We’ll certainly be keyed in on whether Golden State starts the Finals out with Durant going iso. Fortunately for those who enjoy the traditional version of these Warriors, the defensive prowess displayed by one LeBron James will likely take the isolation game away from Durant a majority of the time.

Is coaching that important in the Finals? 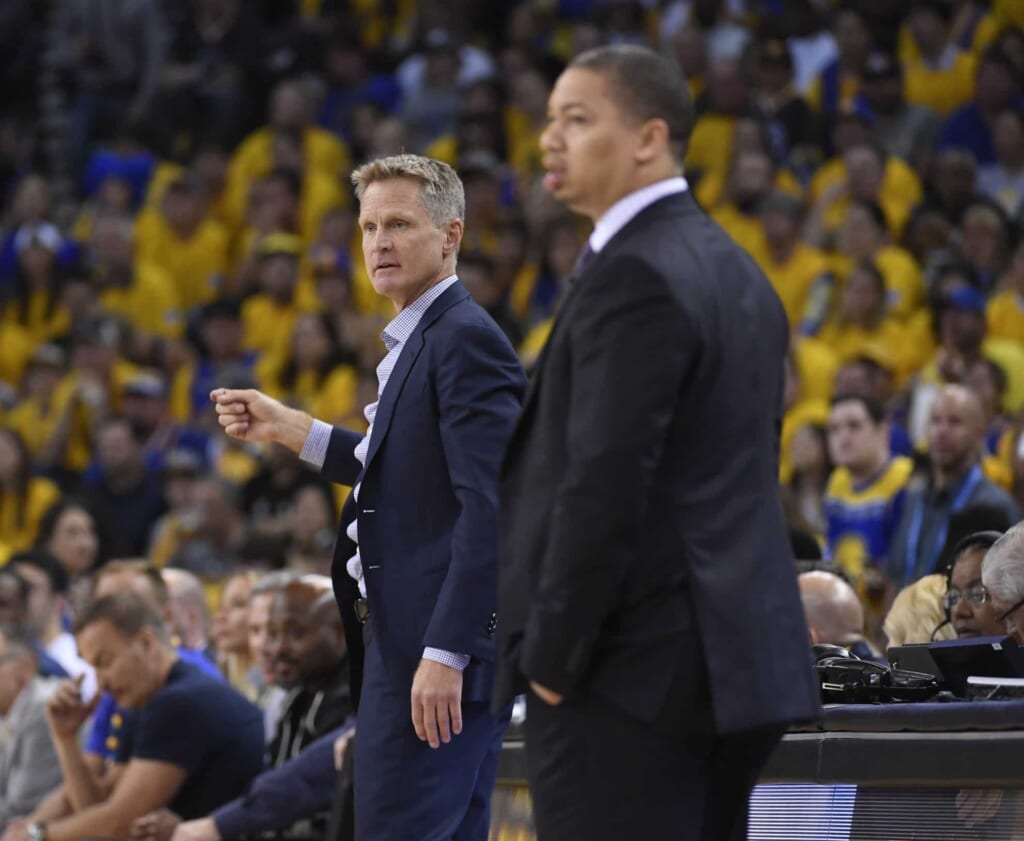 The primary focus here is going to be on those starring on the court. James primarily calls the shots for Cleveland. Meanwhile, Steve Kerr tends to let his talented Warriors squad do their own thing on the court. Though, there’s certainly something to the coaching matchup heading into this year’s NBA Finals.

It’s all about in-game adjustments, matchups and substitutions. Will Kerr change his substitution MO by making sure Durant is on the court with James at all times? Will Tyronn Lue attempt to exploit Andre Iguodala’s injury by pitting James up against the likes of Jordan Bell and Kevon Looney? If so, how will Kerr respond? It’s the game within the game. And we should get a rather early indication of how this will play out in Game 1.

Can Kevin Love provide that No. 2 scoring option?

Love might not need to match the production we saw from Kyrie Irving in last year’s Finals for the Cavaliers to have a chance. In fact, he’s likely going to have to surpass Irving’s production. That’s the biggest issues Cleveland has heading into Game 1. Is Love capable of averaging 25-plus points per game in hopes of providing James with that legit No. 2 scoring option against a team loaded with three dominant scorers?

If the history between these two teams tells us anything, it’s highly unlikely. Love is not a good matchup against Draymond Green, as evidenced by his 39 percent shooting in last year’s Finals. This was backed up by Cleveland being outscored by 41 points with Love on the court in that five-game set.

How will the Warriors defend LeBron James? 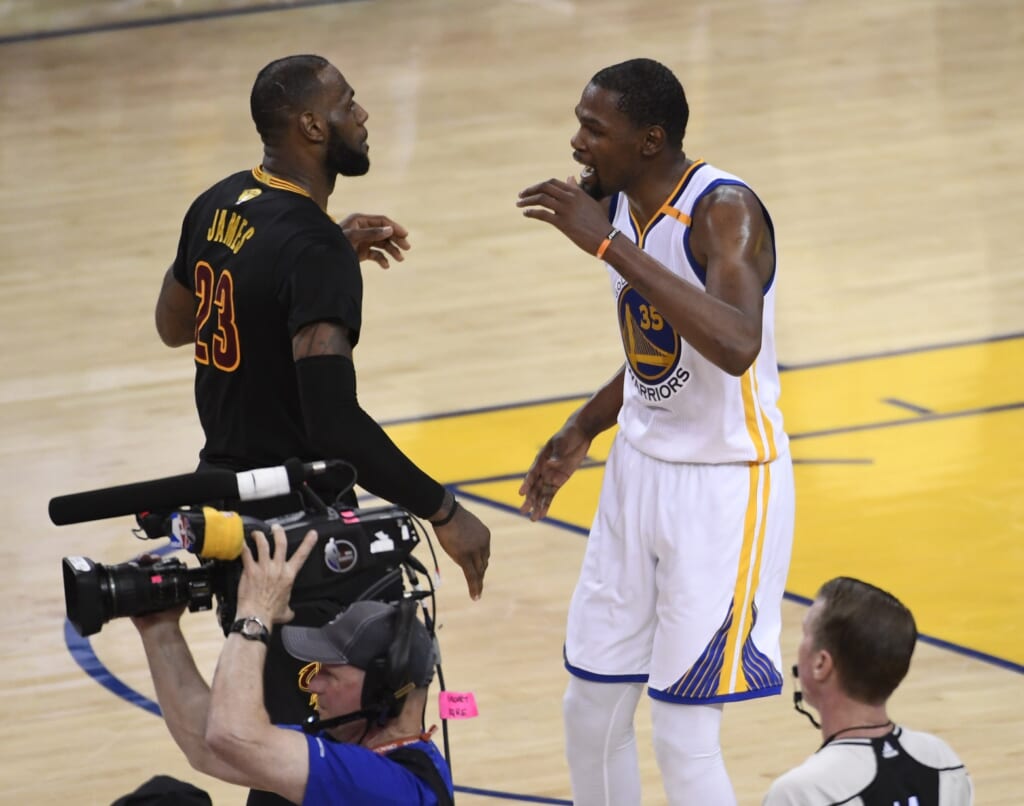 The logical conclusion is that Golden State will pit Kevin Durant up against James throughout the series. Since joining the Warriors, Durant has become one of the best all-around defenders in the game. And while he didn’t stop James in last year’s Finals, the two put up similar numbers. If that repeats itself this time around, the Warriors should win going away.

Then again, James exploits mismatches as well as any player in the NBA. As noted before, he might attempt to go iso against Looney, Bell and/or Curry. Will Golden State attempt to go around the screen game in looking to continue matching James up against Durant? It didn’t necessarily do this with a ton of success against Houston. The underrated aspect here is Looney likely starting for an injured Iguodala. He’s among the best defenders on the Warriors’ roster and handles himself well out on the perimeter. Maybe, Golden State starts out with that to preserve some energy for Durant on offense.

Can Cleveland make this a series?

It’s looking increasingly unlikely that the Cavaliers will be able to take this series beyond the five games we saw last year. Even with Kyrie Irving in the mix during the 2017 NBA Finals, Cleveland was outscored by 34 points in five games. That’s with James and Irving combining to average 63 points per game. In two games this season against the Warriors (both losses), Cleveland was outscored by nearly nine points per game.

James will get his numbers. He might even go superhuman in the Finals. After all, here’s a dude that averaged a triple-double in last year’s championship round. Even then, Durant matching James’ scoring (or coming close) will make this a rather short series. LeBron might be the best on the planet, but he’s only one man. Cleveland doesn’t have the supporting cast to keep up with the defending champs. It’s that simple.