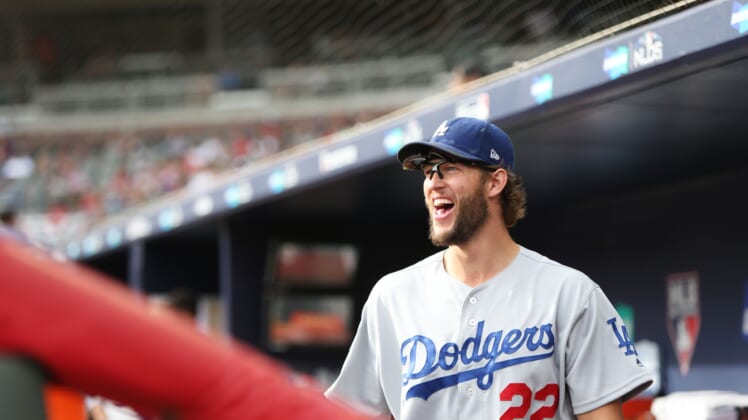 The Los Angeles Dodgers are four victories away from returning to the World Series after 2017’s near miss. The Milwaukee Brewers are four wins away from their first Fall Classic since 1982, when they played in the American League.

The Brewers rode a fantastic bullpen to the playoffs and through the NLDS. Continuing that kind of workload will be a challenge. Clayton Kershaw was dominant for the Dodgers in the NLDS. Will that continue in the NLCS against Milwaukee? On the offensive end, Christian Yelich is obviously the star Milwaukee hitter. But how the hitters around him fare will do just as much to tell us who will win. Meanwhile, Los Angeles is hoping that Manny Machado’s Game 4 is a sign of things to come.

As we get ready for the NLCS showdown between the Dodgers and Brewers, what are the questions that most need to be answered to figure out who’ll win?

1. What kind of effect will the long layoff have?

Conventional wisdom says that a break would be nice, especially in October after more than six months of playing every day. The pitchers can rest their arms. Any injured players can heal up nagging injuries. The managers set their rotations any way they want. But that doesn’t always hold. Teams coming off of a long layoff frequently struggle coming out of the gate. In an everyday sport, such a long layoff is a real break from the norm. And that often offsets any positives that would come.

2. Will the Dodgers get that Clayton Kershaw again?

Kershaw was an absolute stud against the Atlanta Braves in Game 2 of the NLDS. He stuck out only three hitters, but went eight innings and allowed no runs on two hits and no walks. But these aren’t uncharted waters. We’ve seen Kershaw pitch great in one postseason game only to struggle in his next. The 2017 World Series was a prime example of that.

Los Angeles needs to take at least one game in Milwaukee to win this series. If Kershaw repeats his NLDS performance, his start will be a great opportunity for the Dodgers to wrestle home-field advantage away from the Brewers. On the other hand, if Los Angeles loses Kershaw’s start in Milwaukee, the Dodgers could find themselves in a lot of trouble. No matter what happens, his outing will be telling.

3. Will the Brewers continue to protect Christian Yelich?

Yelich finished the regular season on an absolute tear. He hit .367/.449/.770 with 25 home runs after the All-Star break. That seemed to continue into the NLDS, when he homered in his second at-bat. But at that point, the Colorado Rockies seemed pretty determined to make someone else beat them and walked Yelich six times.

It obviously didn’t work well. Erik Kratz was the surprise of the NLDS, hitting .625. But on top of that, Ryan Braun hit .385. Travis Shaw hit .364, as did Mike Moustakas. Those hitters made the Rockies pay for walking Yelich. If that continues, walking Yelich becomes a much less-enticing strategy and the Brewers become awfully hard to beat.

4. Which Walker Buehler shows up?

In August and September, Buehler posted a 1.75 ERA, 0.89 WHIP, and struck out 11.2 hitters per nine innings. That continued into Game 163 against the Rockies when Buehler allowed no hits on only one hit and three walks over 6.2 innings as he pitched Los Angeles to the NL West title. He looked very much like the future ace he’s touted to be. But Game 3 of the NLDS was a different story. Buehler’s control betrayed him, as he walked three. One of the free passes came against the opposing pitcher with the bases loaded. He allowed only two hits, but one of them was quite costly.

If Buehler is off, even if he’s only slightly off, watch out. This Milwaukee lineup is punishing. But if he’s on, both Buehler and the Dodgers are in good shape.

Heading into the playoffs, the starting pitching was the biggest question mark for the Brewers. Milwaukee starters held up quite well in the NLDS. They didn’t go deep into games but also didn’t allow a single run. Mind you, this was despite pitching to a solid Colorado lineup at Miller Park and Coors Field.

But the Dodgers will present an even bigger test. Los Angeles hit the second most home runs in baseball in 2018, trailing only the record-setting New York Yankees. Only one other NL team was even in the top-10. The Dodgers also hit eight homers in the NLDS. The Brewer starters passed their first postseason. Now an even greater one looms.

6. Is Manny Machado getting hot at the right time?

That’s the bad news. The good news is that he slugged .588 and hit two homers. The first was a big home run in Game 2. The other came in Game 4 to effectively end the series. He also doubled earlier in the game. Additionally, none of the seven strikeouts came in that game. That could be just one good game. It could also be the beginning of a hot streak for one of baseball’s best hitters. If it’s the latter, it’s very good news for the Dodgers.

7. Can a slumping Lorenzo Cain turn it around?

If Cain is getting on base, the Milwaukee offense is going to click. It’s almost impossible to imagine anything else happening. If Cain is reaching, teams either have to pitch to Yelich with at least one man on, or walk him and put at least two on for the dangerous hitters behind Yelich. Neither scenario is optimal.

But Cain struggled in the NLDS. He went 1-for-12 and scored only one run. Now, the Brewers overcame that. Not only did they sweep the series, but they hit a respectable .272. But that’s not necessarily sustainable. It’s hard to imagine Milwaukee beating Los Angeles without getting more consistent production from Cain.

8. Who will win the manager battle?

It goes without saying that Dave Roberts has received a ton of criticism in Southern California. That’s what comes with managing a famed organization in the nation’s second-largest media market. To many, the Dodgers’ regular season was somewhat ho-hum with the team posting a 91-71 record and having to go to game No. 163 to win the NL West. Is Roberts’ job on the line here? We’re not too sure.

On the other side, Craig Counsell is a candidate for manager of the year. He led his surprising Brewers to an NL-best 95-67 record. Finding ways to work in an elite-level bullpen at pretty much all the rights times and mixing in a deep bench, Counsell did wonders with this roster. It will certainly be interesting to see who comes out on top in this matchup.

9. Will fatigue be an issue for the Milwaukee bullpen?

The starting rotation held up well for the Brewers in the NLDS. But not one Milwaukee starter went beyond five innings. As a result, the bullpen got tested. Corbin Burnes, Jeremy Jeffress, and Corey Knebel all threw three or more innings. Joakim Soria and Josh Hader each went more than two. That doesn’t even count Brandon Woodruff, the reliever who threw three innings as the Game 1 “opener.”

Mind you, these workloads came in a three-game sweep. This series will go at least four games and probably more. Craig Counsell has a fantastic bullpen to work with. He’s certainly asking a lot out of them. It’s fair to wonder how well they’ll hold up.

While the extended layoff can be a mixed blessing, we’re seeing it as a bonus for Milwaukee here. We’d be really worried about those relievers fatiguing. But their arms should be pretty well rested for the beginning of this series.

The Dodgers do carry a good starting pitching edge. But postseason baseball is becoming more dependent on bullpens. The Brewers hold that edge and quite frankly, it’s not a small one. In the end, look for that to be the difference in this series.