11 best 25 and under NFL offensive stars

The 2015 NFL season concluded with some younger players accomplishing some amazing and noteworthy stats. Records were set and broken, while newly drafted players came to the aid of ailing veterans. 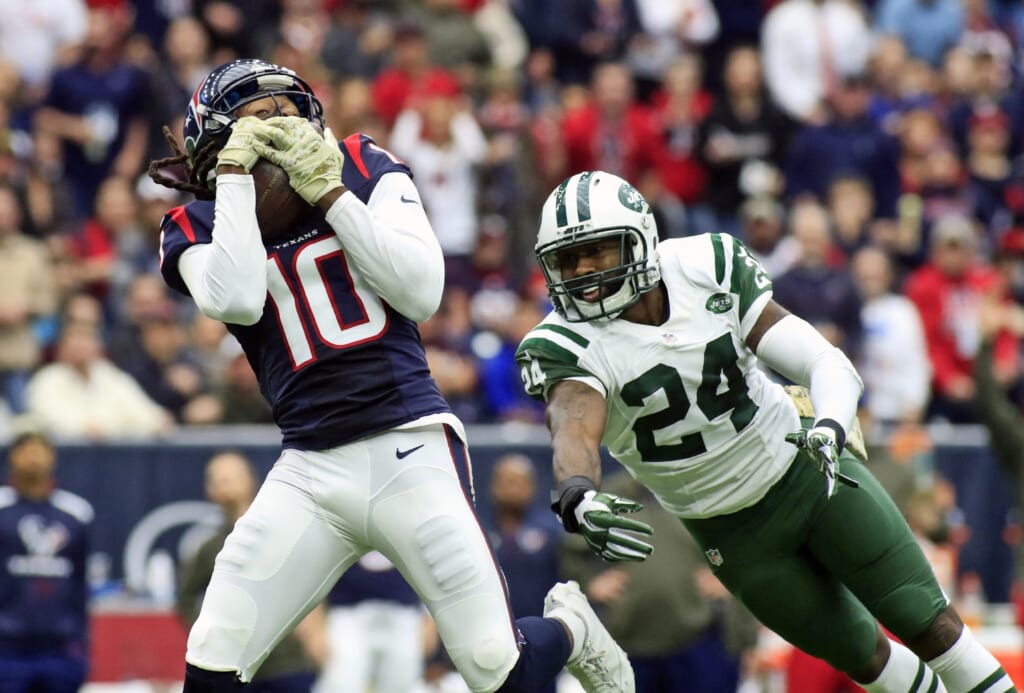 Hopkins’ 1,521 yards and 192 targets ranked him third-highest in both categories at the position. Plus he had three games with at least two touchdowns during the season. Hopkins’ 148 yards and two scores against the Jacksonville Jaguars earned him AFC Offensive Player of the Week honors in Week 6.

After a tremendous personal season, Hopkins’ wish to play in the Super Bowl was unfortunately crushed after one round of the playoffs. However, Hopkins did make his first career Pro Bowl appearance.

If the Texans could somehow improve their middling quarterback position, the sky would be the limit for Hopkins, who is only 23. 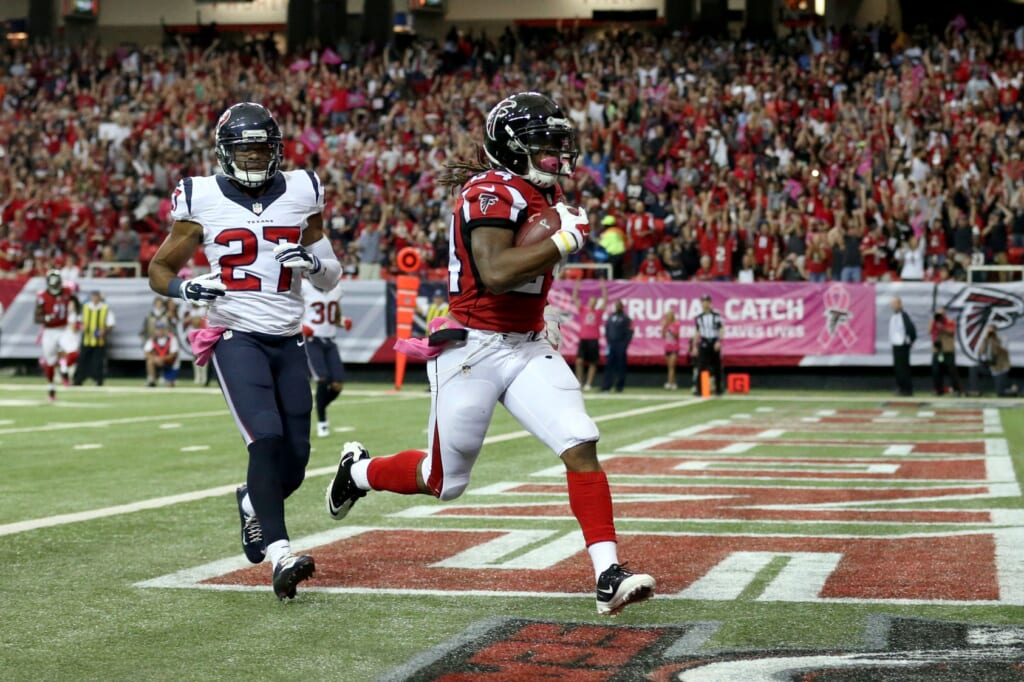 After receiving minimal touches in 2014, Devonta Freeman opened the 2015 season as the second-string back behind rookie Tevin Coleman.

When Coleman went down for an injury early in the season, Freeman came up strong and started 13 games for the Falcons. In Weeks 3 and 4, Freeman rushed for an incredible three touchdowns each game and accumulated a total of 209 rushing yards.

Week 3 sparked a four-game stretch that saw Freeman score a total of nine touchdowns while tallying 825 all-purpose yards. Fantasy football owners were in love while those who opposed Freeman hoped he would return to reality.

In all, Freeman finished the season with a total of 1,056 rushing yards, 11 touchdowns, 578 receiving yards and three more scores. He also participated in his first Pro Bowl.

The Falcons should be convinced of Freeman’s capabilities as a rusher and receiver moving forward. 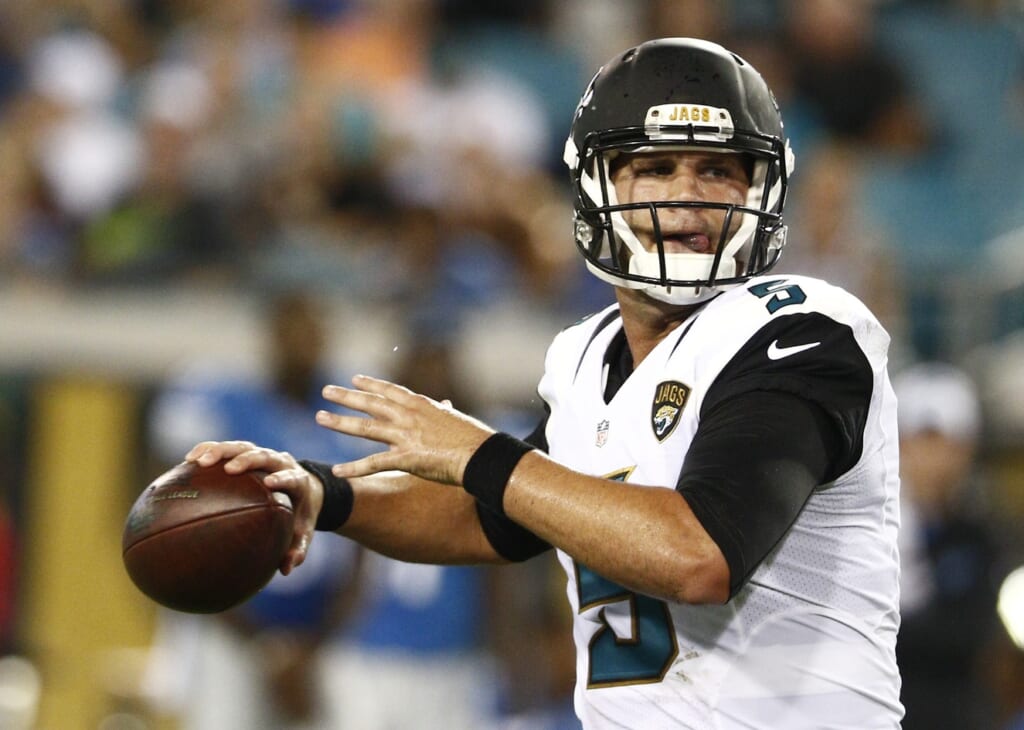 He finished 2015 with a 5-11 record while passing for franchise records of 4,428 yards and 35 touchdowns. His 35 scores tied for second-most in the league falling only one short of Tom Brady’s 36.

Although Bortles tossed 18 interceptions, this was much improved after managing just 11 touchdowns and 17 picks in 2014.

Thanks to a powerful arm and blessed with a duo of young, talented receivers, Bortles’ primary task this season will be to improve on his win total. 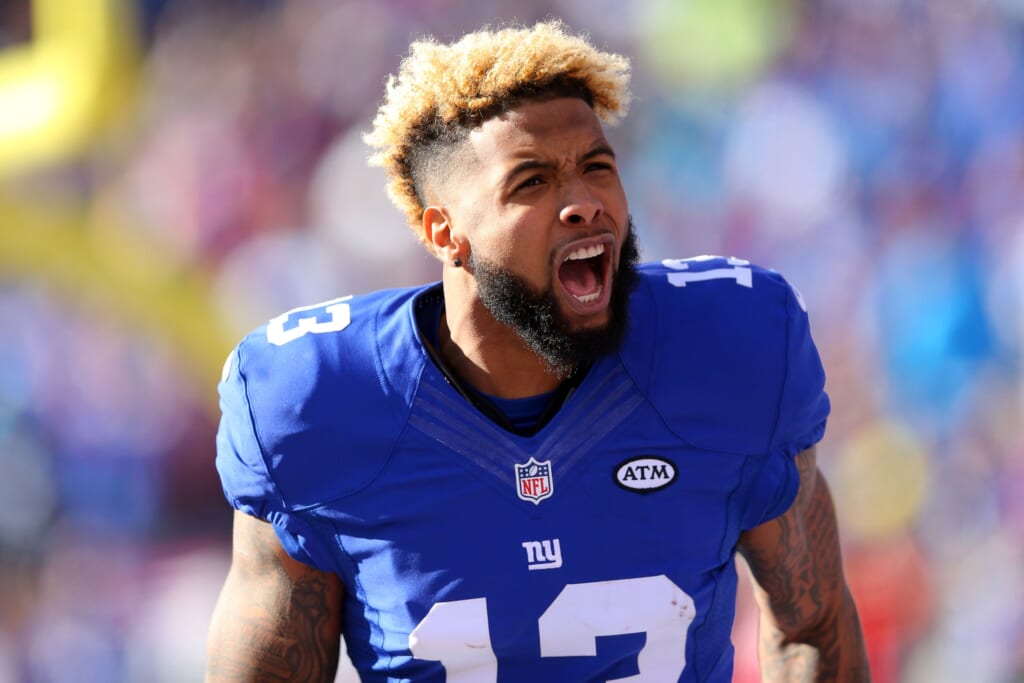 Odell Beckham Jr. proved naysayers wrong when he did not fall victim to the classic sophomore slump last season.

Instead, he increased his numbers, tallying 96 catches for 1,450 yards and 13 touchdowns. Had he not served a one-game suspension late in the season, he likely would have topped the 1,500-yard mark.

Beckham’s 2015 yardage combined with his that of his 2014 campaign (1,305) was enough to break Randy Moss’ record for the most receiving yards by any player through two seasons.

Famous for his dynamite one-handed catches, OBJ worked hard his last season to master the art of becoming ambidextrous to train his left hand to be as coordinated for catching as his right.

Arriving to each game full of passion and armed with an uncanny ability to evade defenders, Beckham has already made history as one of the NFL’s elite younger pass-catchers to date. 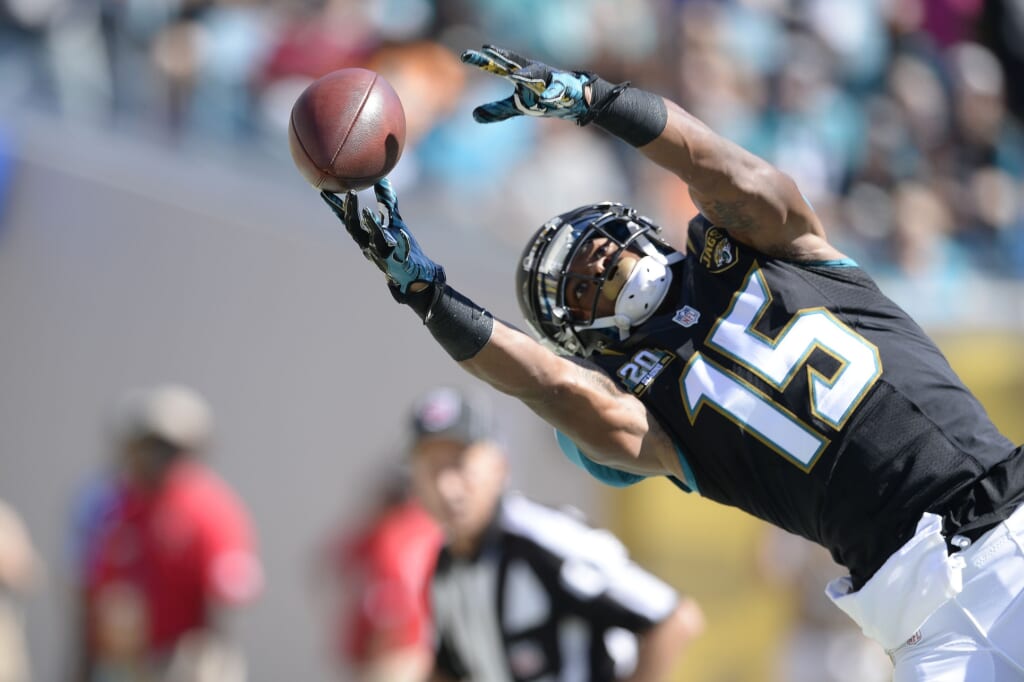 During his second season with the Jaguars, Allen Robinson established himself as the team’s No. 1 receiver. He totaled 1,400 yards on 80 receptions.

Robinson tallied the second-highest single-season yardage mark in franchise history and set a Jaguars record with 14 touchdowns. That also tied Brandon Marshall and Doug Baldwin for the most in 2015.

Teaming up with fellow wideout Allen Hurns, who tallied 1,031 yards, the duo was Jacksonville’s first receiving tandem to surpass 1,000 yards since 2001.

Robinson, only 22, and Bortles have already developed tremendous chemistry and should continue to turn heads in 2016. More wins, of course, would be the goal.

As one of the top prospects of 2015, Todd Gurley did not disappoint his team after being selected with the 10th overall pick.

Bouncing back after undergoing ACL surgery in 2014, Gurley earned Offensive Rookie of the Year honors after a stunning first season.

Todd Gurley holding his Rookie Of The Year trophy expresses love for the STL to Jim Thomas saying, "This is theirs." @KSDKSports #stlrams

In 13 games played last season, Gurley rushed for 1,106 yards at a healthy pace of 4.8 per carry and scored 10 touchdowns. He also posted four consecutive games in which he rushed for no less than 128 yards.

If Gurley continues at his current pace, he will be in the running to eventually upend Steven Jackson, who holds the franchise’s rushing record with 10,138 yards.

In his second season, Derek Carr showed vast improvement when he helped lead the Raiders to finish the season with seven wins. This was more than the team had accomplished since 2011.

Carr improved on his rookie stats, throwing for 717 more yards and the NFL’s fourth-most touchdowns (32) in 2015. He also bolstered his completed passing percentage from 58.1 to 61.1. Carr managed six games of 300-plus yards and tossed at least three touchdowns five times.

The additions of Michael Crabtree and Amari Cooper, who combined for 1,992 yards and 15 touchdowns, should keep Carr poised for more success moving forward.

In a division that could see a shift in the tide next season, it’s not exactly a longshot to see Carr and the Raiders playoff-bound. 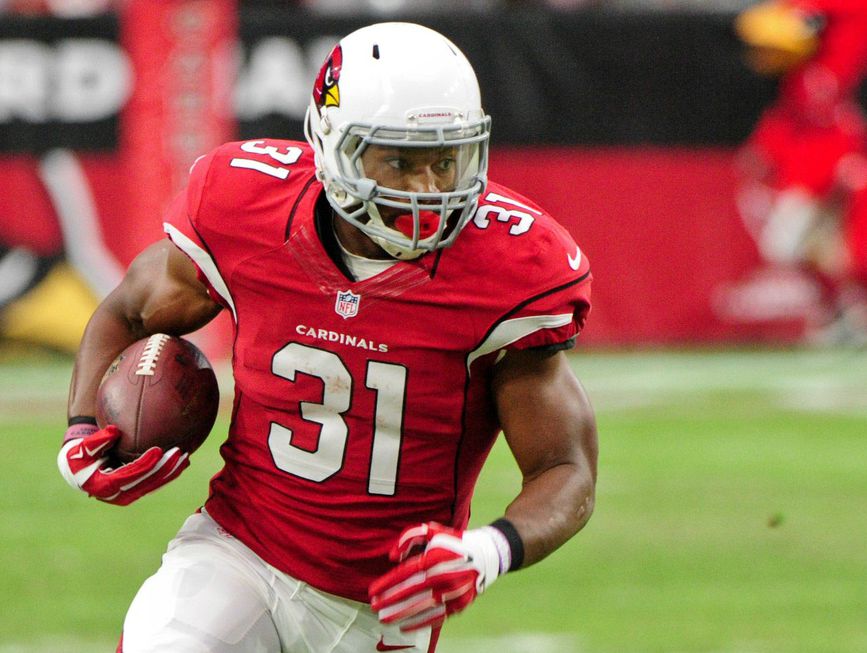 Drafted by the Arizona Cardinals in the third round, David Johnson started out his rookie season as part of a three-headed running back committee that consisted of Andre Ellington and veteran Chris Johnson.

Though due to Ellington’s lingering injures and an eventual season-ending injury sustained by Chris Johnson, David assumed the lead duties for the Cardinals mid-season. Excelling beautifully as a multi-dimensional back and a special-teamer, Johnson totaled 1,637 all-purpose yards.

He scored eight rushing, four receiving and one kickoff-return touchdown, a 108-yarder that earned Johnson Week 2 NFC Special Teams Player of the Week honors. All the while, Johnson maintained a healthy 4.6 yards per carry.

With a bright future ahead, Johnson appears to have done more than enough to retain his job as the team’s starter in 2016. 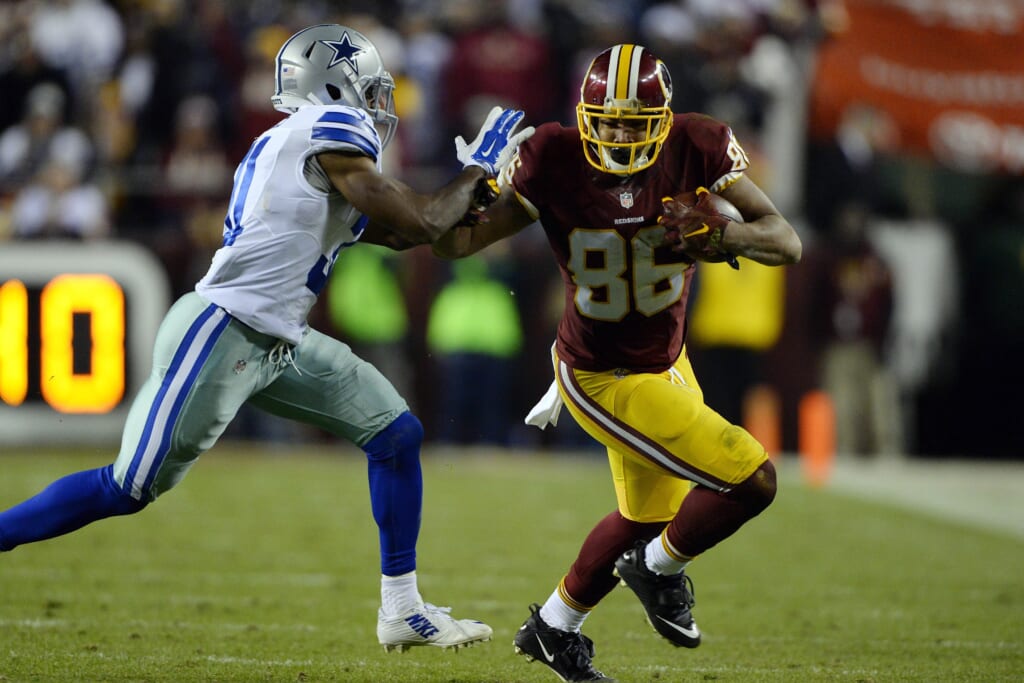 The emergence of Jordan Reed made Kirk Cousins’ job a little bit easier in 2015.

Assuming the role of Washington’s top receiver, Reed caught 76.3 percent of his targets for a total of 87 receptions, 952 yards and 11 touchdowns. Reed produced these numbers after starting in only nine games.

Unfortunately, Washington didn’t make it past the first playoff round. However, it wasn’t for any lack of effort on Reed’s part. He had nine catches for 120 yards and one score in a loss to the Green Bay Packers.

As a promising young member of Washington, the Reed/Cousins connection should continue in 2016. This is provided that Cousins, who is a free agent, re-signs with his current team or receives the franchise tag. 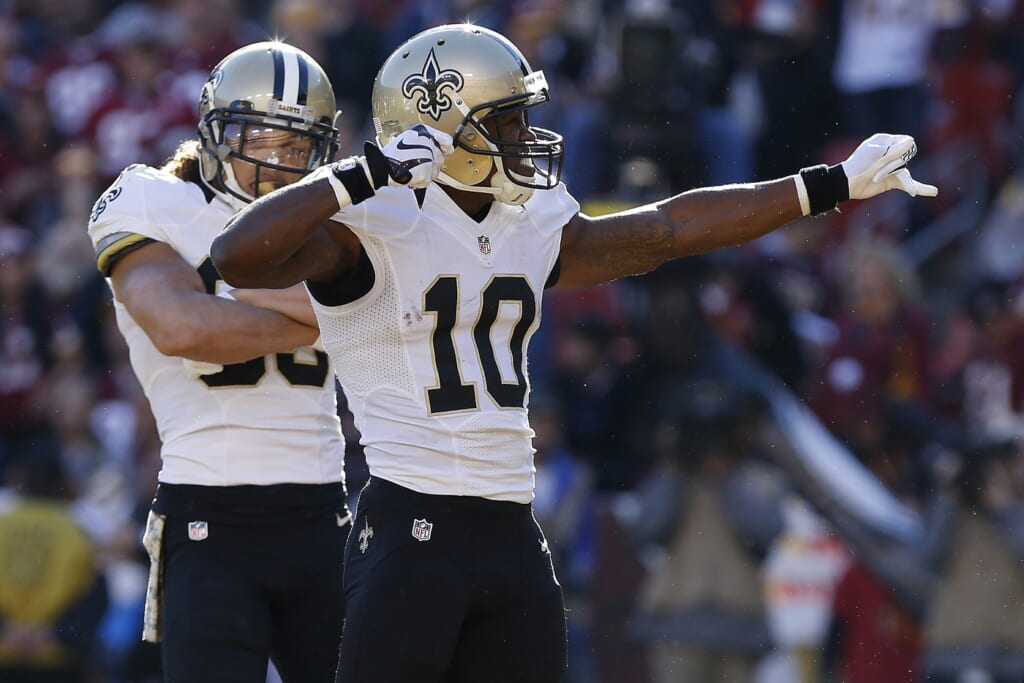 After a rookie season that ended early due to a broken thumb, Brandin Cooks returned and more-than-picked-up where he left off in 2014.

Ending his year with 84 catches, Cooks tallied 1,138 yards and nine touchdowns. Much of Cooks’ success comes from the fact that his trusty quarterback Drew Brees ranked highest in passing yards last season.

Although Cooks had much to be proud of personally, the Saints still struggled, particularly on defense. As a result, the team finished 7-9 in the NFC South.

Despite Brees’ age, the veteran is showing little signs of slowing down, which means more targets and fantastic plays for Cooks next year.

Thomas Rawls came to the scene and rescued the Seahawks’ rushing game after Marshawn Lynch was sidelined due to an abdominal injury. Rawls may have played well enough to convince Lynch that Seattle would be in fine hands if he chose to retire, which he ultimately did.

Prior to an ankle injury, Rawls broke tackles and bruised his way down the field to total 830 rushing yards at a stout pace of 5.6 yards per carry. He also added four rushing touchdowns.

Rawls played a minor role in the passing game, registering nine receptions for 76 yards and one touchdown. Considering Rawls was an undrafted free agent, he definitely made himself a household name by the end of the season.

It’s way too early, but with Lynch’s plans to retire looking pretty solid, Rawls is already being labeled a top-25 draft prospect in 2016 fantasy football leagues.