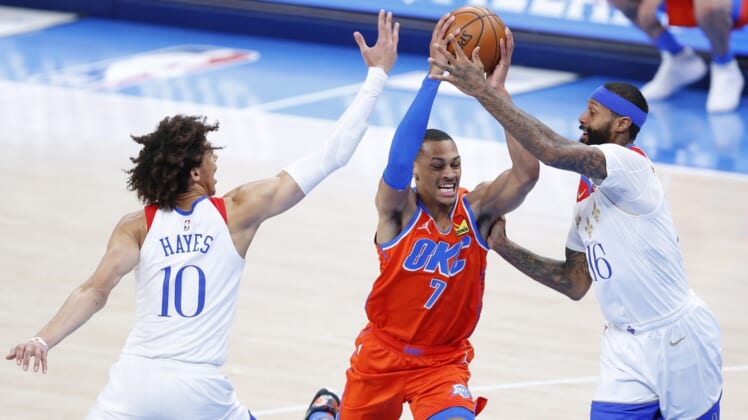 Zion Williamson scored 27 points to lead the New Orleans Pelicans to a 109-95 road win over the Oklahoma City Thunder on Thursday.

The Pelicans, who won for the third time in five games, moved within three games of the No. 10 spot in the Western Conference with the win and Golden State’s loss at Minnesota.

The Thunder lost for the 15th time in 16 games.

In a loss at Denver a day earlier, Williamson’s potential game-tying shot try in the closing seconds was blocked by Nikola Jokic on a play the NBA’s two-minute report said Thursday should’ve been a foul.

Thursday, the Pelicans didn’t let it come down to the wire.

New Orleans grabbed control with a 19-3 run to end the first half, led by Williamson and Ingram. The duo combined for 15 of the Pelicans’ points during the stretch.

While New Orleans heated up offensively, the Thunder went cold, going just 1 for 9 from the field in the final six minutes before halftime with six turnovers.

The Pelicans were without Steven Adams for the second time in three games with a toe injury.

The Thunder’s ever-changing rotation went through another evolution against the Pelicans with the two newest members of the team — Charlie Brown Jr. and Gabriel Deck — taking over the minutes of Kenrich Williams.

Williams was the only Oklahoma City player to play in all 62 games going into Thursday’s game but did not make an appearance in the loss.

Deck, who recently signed a multi-year deal with the Thunder after playing the last three seasons in Spain, made his NBA debut late in the first quarter and was immediately given the task of guarding Williamson.