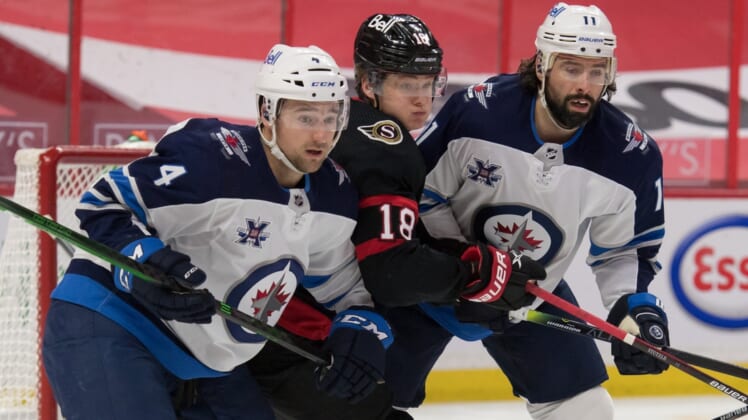 Tied 1-1 late in regulation, Zaitsev ended some good zone time in Winnipeg’s end from above the right circle by firing in his third goal of the season — a rocket that flew in over Jets goalie Laurent Brossoit for the game winner.

Winnipeg (27-21-3, 57 points) dropped its seventh consecutive game — all in regulation. The Jets’ last victory was April 15 in Toronto.

Ottawa’s Connor Brown notched a shorthanded tally and had an assist, and goalie Filip Gustavsson made 28 saves on 29 shots in his second consecutive start.

Winnipeg’s Josh Morrissey tied the game in the third period, and Brossoit stopped 16 of 18 shots but fell to 1-4-0 in his past five decisions.

Team-leading goal scorer Kyle Connor skated in his 300th NHL game but failed to find the net for the sixth time in his past seven matches.

On its second man advantage of the first period, Winnipeg slipped up and let penalty-killer Nick Paul get to a puck that skipped along the boards past Jets power-play point man Neal Pionk. Paul led a two-on-one and slid a perfect pass to Brown, who popped home his team-leading 18th goal at 11:31. The marker was also Brown’s club-best fourth while shorthanded.

However, the bad news for the Senators was that top defenseman Thomas Chabot took a hard hit from Winnipeg’s 6-foot-7 blueliner Logan Stanley and left the game.

Chabot — paired with Zaitsev — logged only 2:57 of ice time on four shifts. The club announced during the first intermission that the 24-year-old Quebec native was out for the remainder with an upper-body injury.

With four power plays in the second period, Winnipeg held a commanding 23-10 edge in shots through 40 minutes — 17-4 in the second — but Gustavsson and the Senators’ shorthanded defense kept the visitors off the board.

Morrissey got a good look in close midway through the third period and tied the game at 1-1 with his fourth marker and first since April 8.

The two teams meet Saturday night in Winnipeg for the final time.