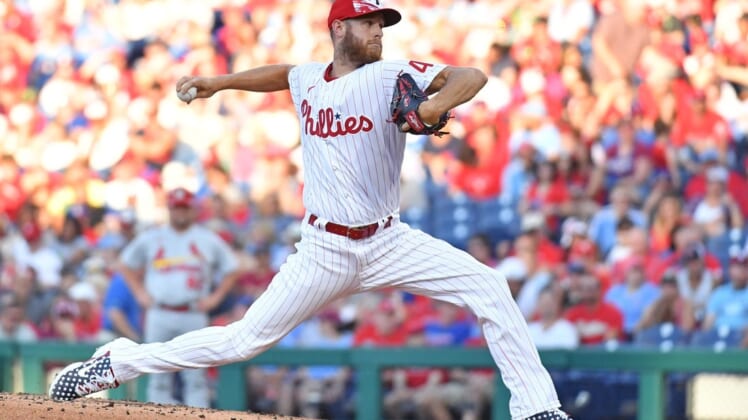 Zack Wheeler and two relievers combined on a four-hitter as the Philadelphia Phillies shut out the visiting St. Louis Cardinals 4-0 Sunday.

Wheeler (7-4) held the Cardinals to those four hits and a walk while striking out five batters over seven innings. It was his fifth scoreless start of six of more innings this season, tying Rangers pitcher Martin Perez for most in the majors.

Nick Nelson set the down the Cardinals in the eighth inning and Corey Knebel closed out the ninth.

JT Realmuto hit a two-run homer and Rhys Hoskins added a solo homer, a double and two runs for the Phillies, who are 21-9 since the end of May.

The Phillies threatened in the third inning when Bryson Stott walked with one out and Yairo Munoz lined a single to center field. But Kyle Schwarber grounded into a double play to end the inning.

Hoskins broke the scoreless tie with his fourth homer in his last five games. Realmuto and Alec Bohm hit two-out singles before Odubel Herrera grounded out.

The Phillies increased their lead to 4-0 in the sixth inning. Hoskins hit a leadoff double, his sixth hit in 10 at bats against Wainwright, and he scored on Nick Castellanos’ single.

One out later Realmuto hit his two-run homer.

The Cardinals threatened again in the eighth inning when Andrew Knizner walked and advanced to second on a groundout, but Nelson struck out Brendan Donovan to leave him there.

The Phillies had a chance to tack on in the eighth inning with the help of an error. After Darick Hall hit a single, Realmuto hit a potential forceout grounder — but second baseman Nolan Gorman muffed shortstop Tommy Edman’s throw.

Hall raced to third and Realmuto later stole second base, but Herrera struck out to strand them.