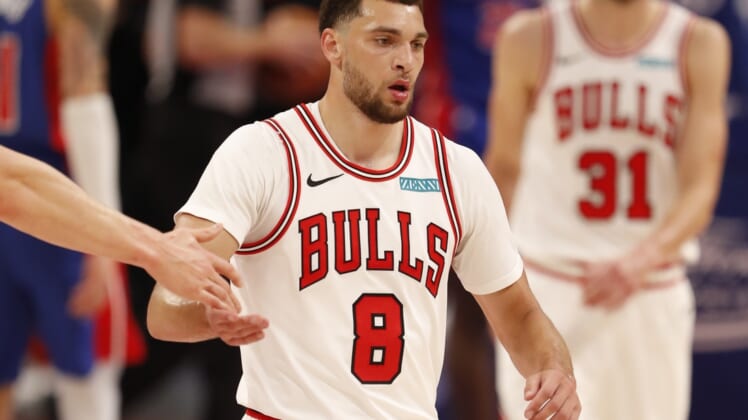 May 9, 2021; Detroit, Michigan, USA; Chicago Bulls guard Zach LaVine (8) gives five to a teammate as he walks to the bench during the second quarter against the Detroit Pistons at Little Caesars Arena. Mandatory Credit: Raj Mehta-USA TODAY Sports

Chicago Bulls guard Zach LaVine has cleared health and safety protocols and will join his Team USA mates in Tokyo on Thursday.

The U.S. squad’s opening game in Japan is on Sunday against France at the Summer Olympics.

LaVine finished third on the team with 43 total points over four exhibition games.

Bradley Beal was forced to leave the team due to health and safety protocols and Jerami Grant was in contact-tracing protocols for four days.

Team USA will get a further boost when Khris Middleton, Jrue Holiday and Devin Booker arrive in time for Sunday’s contest. The Undefeated reported the three players, who just finished playing in the NBA Finals on Tuesday night, will be on a private plane departing for Tokyo on Friday.