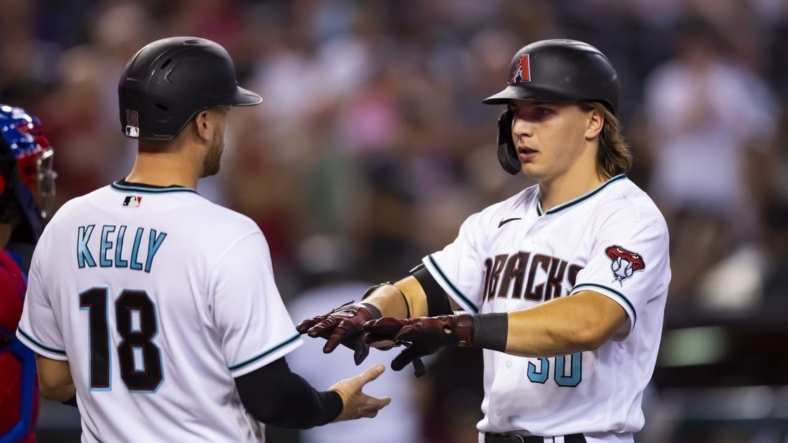 Zac Gallen stretched his scoreless streak to 34 1/3 innings and Jake McCarthy homered, tripled and drove in a career-high five runs as the Arizona Diamondbacks mauled the Philadelphia Phillies 12-3 on Tuesday night in Phoenix.

Gallen (10-2) gave up just two hits in seven innings while posting his fifth straight scoreless start. Gallen struck out seven and walked one as the Diamondbacks won their season-best fifth straight game.

Gallen’s scoreless streak is the second longest in Arizona history behind Brandon Webb’s 42-inning stretch in 2007. He has allowed just 14 hits during the span and is also 6-0 with a 0.69 ERA over his last eight starts.

McCarthy had a two-run triple and three-run homer and Corbin Carroll had three RBIs as the Diamondbacks beat the Phillies at home for the seventh consecutive time. Alek Thomas had a career-high four hits, and Daulton Varsho and Christian Walker had three apiece as Arizona racked up 17 overall.

After falling behind 7-0 on Monday, the Diamondbacks scored 22 consecutive runs until Philadelphia ended its drought in the eighth on Tuesday. Arizona won 13-7 in the opener and led 9-0 on Tuesday.

Brandon Marsh hit a three-run homer for the Phillies, who lost their third straight game after winning 22 of their previous 30 outings.

Philadelphia’s Aaron Nola (9-11) allowed a career-worst eight earned runs and equaled a career worst of 10 hits while striking out five and walking none in four innings.

Arizona scored five runs in the second off Nola. The first came in on Carroll’s single and the second on Thomas’ double.

Later in the inning, Thomas scored on a safety-squeeze bunt by Geraldo Perdomo to make it 3-0. One out later, McCarthy ripped a two-run triple to make it a five-run margin.

McCarthy struck again in the fourth as he came up with runners on first and third with one out. He attacked Nola’s first-pitch fastball and slugged a 419-foot homer to right to make it 8-0.

Perdomo hit a sacrifice fly to center off Sam Coonrod in the fifth to increase Arizona’s lead to nine.

Marsh slugged a three-homer with two outs in the eighth, off Noe Ramirez, to end the shutout. It was Marsh’s ninth home run of the season.

Carroll slammed a two-run double off the center-field wall and scored on Thomas’ single as the Diamondbacks added three in the bottom of the eighth off position player Nick Maton.