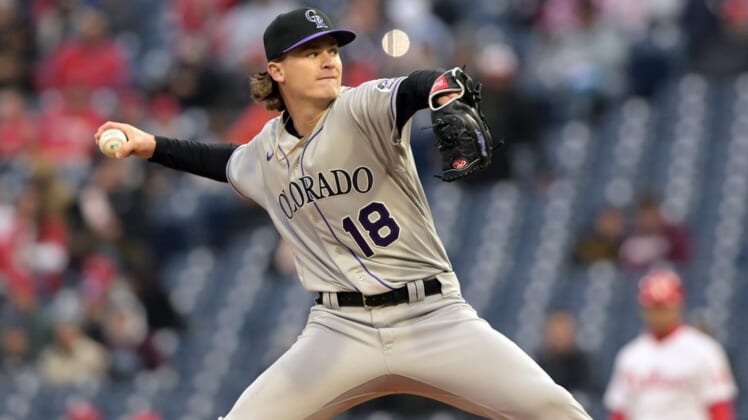 The Pittsburgh Pirates and visiting Colorado Rockies, who sew up a three-game series with a deciding game on Wednesday, are taking a look at younger players in seasons that have not been stellar.

That particularly goes for the Pirates.

This week, they have brought up right-hander Yerry De Los Santos, right-hander Roansy Contreras and outfielder Cal Mitchell from Triple-A Indianapolis because of a mix of injuries and performance issues.

Contreras, who made three relief appearances in an earlier callup this year, started Tuesday and gave up three hits in five scoreless innings.

Mitchell — who was left off the Pirates’ 40-man roster but proved himself with his minor league play — started in right field Tuesday in his big-league debut and drove in Pittsburgh’s only run in a 2-1, 10-inning loss. He also made a leaping catch at the wall.

“They both impacted the game,” Pittsburgh manager Derek Shelton said of Contreras and Mitchell.

Pittsburgh designated hitter Daniel Vogelbach, who leads the team with six homers, hit the 10-day IL because of a left hamstring strain.

The Rockies — who were in a 1-10 road rut before winning Tuesday — are without outfielder Kris Bryant at the moment. He came off the IL because of a back ailment Saturday but was back out of the lineup by Monday because of back soreness.

“He’s going through some exercises (but he’s) still not right so he’s going to continue (working) with the medical staff,” Black said.

Rockies center fielder Yonathan Daza, who is hitting .354 but did not start in either of the games this series, will return to the lineup Wednesday, according to Black. He lined out as a pinch hitter on Tuesday.

“We’ve got to figure it out,” Shelton said.

Feltner will be making his fourth career start, second this season, and first against Pittsburgh.

Black said Feltner is stretched out enough to last “100 pitches or more” if things go well.

Against the Philadelphia Phillies on April 27, Feltner pitched five innings, giving up four runs and seven hits with two walks and a career-high seven strikeouts.

Thompson, who will be facing Colorado for the first time, has been effective lately.

On Friday against St. Louis, Thompson gave up one run and five hits in five innings in a loss. On May 14, he picked up a win with six scoreless innings against the Cincinnati Reds. At that point, he had a 12-inning scoreless streak.

“I’m finally able to get in my routine and do what I’ve done for a lot of my life,” he said. “It’s nice just to get out there and throw and put up zeros, help my team get in a winning situation.”