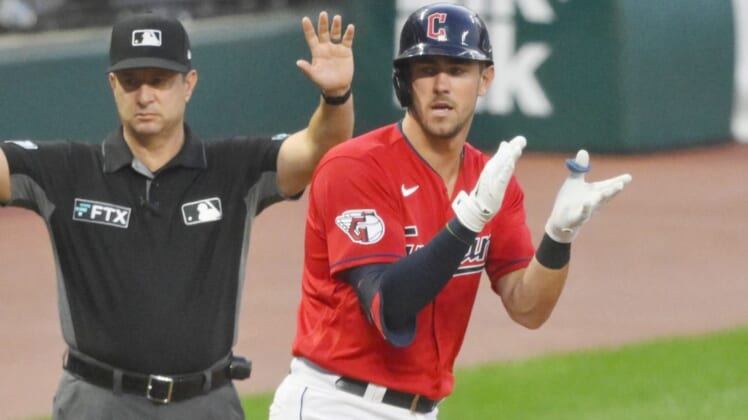 The youngest team in the majors keeps getting younger.

As the Cleveland Guardians began an eight-game homestand by beating the Chicago White Sox on Monday, they brought up another rookie, outfielder Alex Call — the 10th player to make his major league debut with the team this season.

The series continues with a day-night doubleheader on Tuesday.

The youth movement continued last week, when rookie Oscar Gonzalez landed on the injured list due to an abdominal injury, giving outfielder Nolan Jones his chance. Jones has made the most of it.

He went 2-for-3 with a double, two runs and four RBIs on Monday in Cleveland’s 8-4 win over the Chicago White Sox.

The left-handed batter has hit safely in all four games since being brought up from Triple-A Columbus, going 7-for-13 (.538) with a homer and eight RBIs.

“I’m trying to do my part,” Jones told Bally Sports Great Lakes after the Monday game. “To get up there and come through (against Chicago’s Lance Lynn) is huge.”

Jones tied Roy Weatherly (1936) for the most RBIs in his first four major league games for Cleveland.

“He was rated (our) No. 1 prospect for a couple of years,” Guardians manager Terry Francona said. “He’s worked hard on shortening his stroke.”

Francona said the important thing is that Jones is finally healthy. The 24-year-old Philadelphia-area native missed time with a hand injury and an ankle sprain in the minors.

“He doesn’t look overmatched,” the manager said. “He’s not chasing balls. He’s giving himself a chance to be successful.”

Call pinch-hit for Jones and flied out to center in the seventh inning.

“He was smiling the whole way,” Francona said. “He looked like he stuck a (coat) hanger in his mouth.”

The Guardians are 5-1 vs. Chicago this season, including a 4-0 mark in Cleveland. They will try to keep that streak going on Tuesday during the day-night doubleheader.

Two of the AL’s top right-handers will appear in the twin bill, but not against each other.

Cease was not included on the American League All-Star roster despite leading the majors in strikeouts per nine innings at 13.01. He has double-digit strikeouts in four games this year and is third in the majors with 133 whiffs. He has compiled a 0.60 ERA in his last eight starts and fourth in the AL with a 2.45 ERA.

Pilkington, a rookie, has never faced the White Sox. In his most recent start, on July 4 in Detroit, he gave went four innings, giving up three runs (one earned) on four hits with two walks and two strikeouts.

Bieber, the 2020 AL Cy Young Award winner, is 6-2 with a 2.48 ERA in 13 career starts against the White Sox. He hasn’t won a game since June 3 vs. the Baltimore Orioles and has lost two of his past three starts.

Martin, a rookie, will be recalled from Triple-A Charlotte to make his sixth major league appearance and his third start.

On June 21, he surrendered three runs in one-third of an inning and took a blown save against the Toronto Blue Jays. The White Sox eventually won that game 7-6 in 12 innings, but Martin was optioned to Charlotte the next day.

Chicago first baseman Jose Abreu went 2-for-4 on Monday to raise his average to .295. He had a 14-game hitting streak snapped on Sunday.

Third baseman Yoan Moncada blasted a three-run homer for Chicago in the third inning on Monday, giving him 15 RBIs in his past 16 games. However, he is batting only .191 for the season.