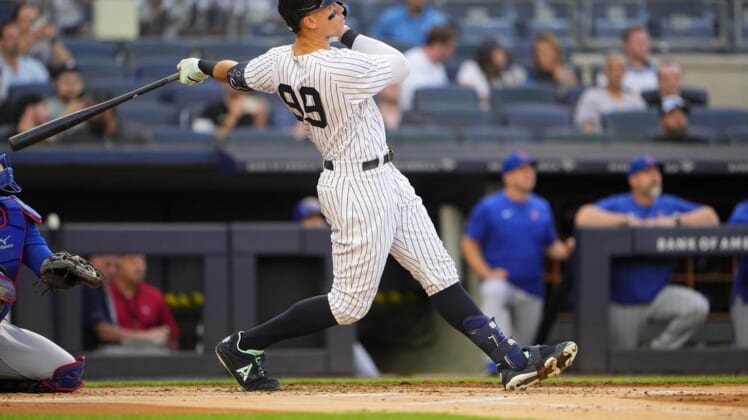 Aaron Judge homered twice as the surging New York Yankees slugged their way to an 8-0 victory over the visiting Chicago Cubs on Saturday night at Yankee Stadium.

The Yankees set a season high with six homers, raising their MLB-leading total to 94. New York also won for the 10th time in 11 games and improved to 43-16, marking the fifth time in team history it won at least 43 of its first 59 games. The last instance was in 1998.

Judge hit his second career leadoff homer when he lined a 1-0 fastball from Chicago rookie Matt Swarmer (1-1) into the left field seats. He then hit his MLB-best 24th homer in the fifth to give the Yankees a 5-0 lead.

Giancarlo Stanton hit his 13th homer of the season in the fourth. Gleyber Torres also homered for the second straight night. He hit his 12th homer one pitch after Stanton’s 436-foot drive went off the facing in the second deck in left.

Jose Trevino followed up his pinch-hit game-ending single in Friday’s win with a homer that bounced off the left field foul pole. Trevino finished 3-for-4.

Anthony Rizzo also homered against his former team after going 0-for-4 in his first game since being traded by the Cubs to the Yankees in July.

Isiah Kiner-Falefa added an RBI single and Judge hit a sacrifice fly in the sixth.

New York left-hander Jordan Montgomery (2-1) won for the second time in three starts, allowing five hits in seven innings. He struck out five, walked none and got 12 outs via ground balls.