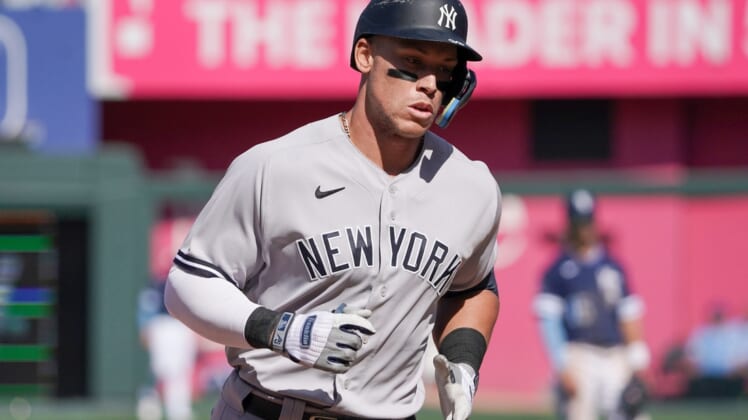 Aaron Judge homered twice and drove in three runs as the New York Yankees and ran their winning streak to nine games with a 6-4 victory over the host Kansas City Royals on Sunday afternoon.

Judge homered two batters into the game when he hit a 453-foot drive off Kansas City starter Daniel Lynch and connected again with two outs in the ninth off Josh Staumont.

In between Judge’s seventh and eighth homers, he also drove in the tying run with a check-swing grounder off Scott Barlow in the seventh when the Yankees took the lead without getting a hit.

It was Judge’s 18th career multi-homer game and second this season.

Earlier in the seventh, Anthony Rizzo entered the game as a pinch hitter and was hit by a pitch from Dylan Coleman (0-1). He scored the tiebreaking run on a groundout by Josh Donaldson when shortstop Nicky Lopez encountered trouble cleanly fielding the ball and the throw was slightly wide of the plate.

Coleman was tagged for two earned runs on two walks without allowing a hit or recording an out.

Judge’s big day and the unique rally sent the Yankees into a three-game series with the Toronto Blue Jays with 16 wins in their first 22 games.

Isiah Kiner-Falefa scored the tying run and hit an RBI double in the fifth. DJ LeMahieu added a run-scoring single in the fifth to get the Yankees within one run before Judge came through again.

Michael A. Taylor homered, Lopez scored on a wild pitch and Carlos Santana hit an RBI double in a three-run third before the Royals lost for the eighth time in 10 games. Kyle Isbel scored Kansas City’s other run on a throwing error by Donaldson in the fourth.

The Royals also played without rookie Bobby Witt Jr. Witt was a late scratch due to a right wrist contusion after getting hit by a pitch on Saturday.

Lucas Luetge fanned Andrew Benintendi with two on and Michael King followed with 1 2/3 perfect innings. King ended the seventh by getting Salvador Perez on a double play and fanned two in the eighth.

Aroldis Chapman stranded two in the ninth for his sixth save.