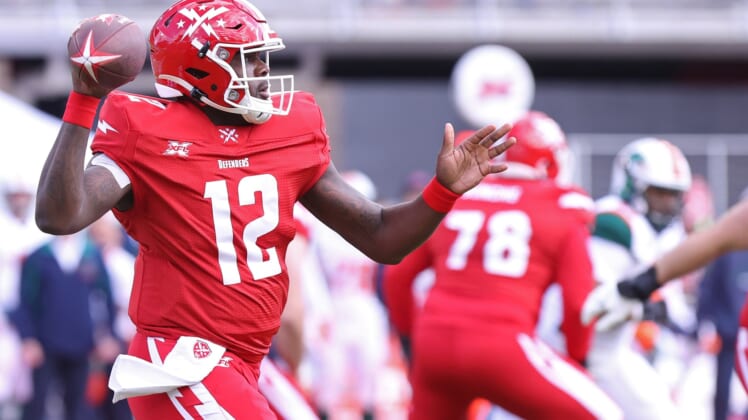 The long-awaited debut of the XFL finally arrived on Saturday as the Seattle Dragons and DC Defenders kicked off Week 1 in style. A bit later in the evening, the Los Angeles Wildcats and Houston Roughnecks closed out the day with a very entertaining game.

The Defenders won their debut over Seattle, 31-19, and the Roughnecks’ offense went off against the Wildcats to win 37-17. The two games on Saturday provided fans with a ton of excitement, along with some of the big hits that the NFL has legislated out of the game.

The rebooted league also featured some big highlights, but of course there were also some disappointing performances. These are the biggest studs and duds from Saturday’s XFL Week 1 action.

Cardale Jones entered XFL Week 1 as a favorite to win MVP at the end of the season. Based on the way he played Saturday, get your bets in before the betting line climbs too much.

Jones, a former Ohio State star who never made it as a starter in the NFL, looked like he could earn another chance at the highest level. He showed toughness in the pocket, avoided pressure with nice movement and always kept his eyes downfield. The result was a very strong overall game in which he racked up 322 yards and two touchdowns from scrimmage.

The Defenders quarterback was also the trigger man on the biggest play of the game, hitting tight end Khari Lee on a gorgeous trick-play touchdown that sparked the victory.

A former undrafted NFL player out of Troy, Brandon Silvers played last year as a member of the now-defunct AAF’s Memphis Express. He ended up playing well, and now he’s leading the Seattle offense in the XFL.

Showing up with some big throws that helped the Dragons stay in the game early, Silvers struggled in the second half and ended up tossing two costly interceptions — the second of which iced the game.

Silvers finished the game completing just over half his passes (21-of-40) for 217 yards. He did throw three touchdowns, but the turnovers were brutal and proved costly.

A former seventh-round pick out of North Carolina, Austin Proehl hasn’t been able to stick on an NFL roster the past couple of seasons. He’s getting a chance to shine in Seattle this season in the XFL, and he’s making the most of the opportunity.

Seattle’s offense struggled overall, but Proehl was the team’s best player on Saturday. His 57-yard touchdown in the second quarter was simply electric (watch here), and he finished with five catches for 88 yards and two scores.

Coming out of San Diego State, Pumphrey was an intriguing player. He racked up 6,458 yards and 57 touchdowns from scrimmage in his final three years with the Aztecs. Then he came into the NFL as a fourth-round pick and never registered a single stat during his first three seasons as a pro.

Now with a second chance to shine, Pumphrey instead displayed the same issues that kept him from succeeding at the NFL level. He finished Saturday’s action with just six total yards on five touches and was absolutely lit up on the biggest hit of XFL Week 1.

The Houston offense was explosive, thanks mostly to a masterful performance from dual-threat quarterback Phillip “PJ” Walker. The dude was absolutely shredding on Saturday, picking apart the Los Angeles defense all game long.

By halftime, Walker had already tossed three touchdowns. He continued to drop dimes in the passing game and was a threat on the ground. All told, the quarterback racked up 298 yards and four touchdowns from scrimmage (along with a late interception on a greedy pass) as the Roughnecks got off to a stellar start to their campaign.

The Los Angeles offense got off to a good start on Saturday, thanks to a nice start from quarterback Charles Kanoff. He scored the Wildcats’ first touchdown on a five-yard scramble, then tossed an 11-yard touchdown to Jordan Smallwood early in the second quarter to put his team up by the score of 14-6.

Unfortunately for the Wildcats, Kanoff cooled off in a big way after that. He got rattled in the pocket, was inaccurate and oftentimes looked lost in the second half. Ultimately, Kanoff was replaced by Jalan McClendon early in the fourth quarter, but he came back briefly after McClendon tossed a pick of hiw own.

He finished the game with 214 yards on 20-of-41 passing with one touchdown and one interception.

NFL fans may recognize this name, as Ealy spent five years in the league and has 15 sacks to his credit. So, it really wasn’t all that shocking to see him dominating the trenches on Saturday for the Roughnecks.

Ealy was a problem. He logged the first sack of the game for Houston and was in on five quarterback hits, along with two tackles for a loss. He’s going to be a force in the XFL this year if he can stay healthy, and should that happen nobody should be surprised if Ealy ends up back in the NFL in 2020.

The first game of the season wasn’t a good one for Los Angeles’ defense. Defensive coordinator Pepper Johnson, a longtime NFL star himself, has to be frustrated about what transpired Saturday as the Roughriders pretty much moved the ball at will without much resistance.

The Wildcats’ defensive line didn’t generate a lot of pressure, which allowed Houston’s offense to completely abandon the run game and pass with tremendous success all game long. Los Angeles would finish with a grand total of two quarterback hits and one sack (all done by Shawn Oakman). That’s not a winning formula in a league that appears to be very pass happy.