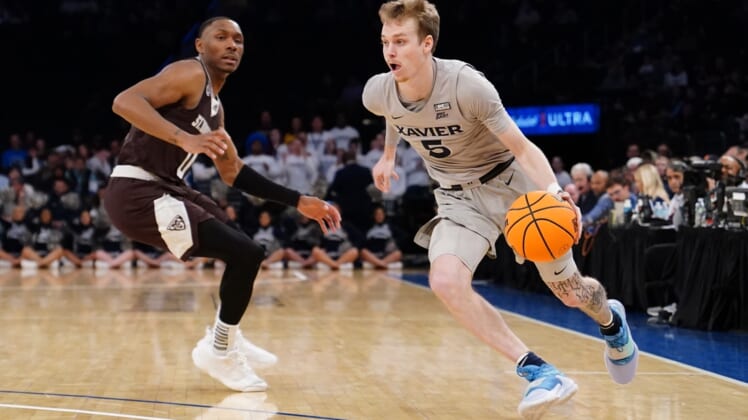 Adam Kunkel, Jack Nunge and Zach Freemantle racked up 18 points apiece as Xavier beat St. Bonaventure 84-77 on Tuesday in the first semifinal game of the NIT in New York.

The Musketeers, one of the event’s second seeds, will battle the winner of the other semifinal between No. 1 seed Texas A&M and Washington State on Thursday for the championship.

But the Musketeers held on, with Freemantle scoring six consecutive late-game points as part of Xavier’s 66.7 percent shooting after halftime.

Colby Jones added 16 points and Nate Johnson had 10 for the Musketeers in the win. Xavier last won the NIT championship in 1958, beating St. Bonaventure in the semifinals and Dayton in the final.

Xavier used a 14-0 run over a five-plus minute stretch of the first half to turn a five-point lead into a 33-14 advantage after a putback by Nunge with 5:23 to play before halftime.

The Bonnies cut their deficit to 13 points on a pair of free throws by Osunniyi with 2:33 left in the half before Freemantle’s layup with 44 seconds remaining garnered Xavier a 38-23 lead at the break.

Nunge had nine points by halftime to lead the Musketeers, and Welch matched that output for St. Bonaventure. Xavier outshot the Bonnies 43.2 percent to 30 percent in the half and owned the boards with a 26-16 edge and 11 second-chance points over the first 20 minutes of play.

This is the final time that the historic tournament is scheduled to be played at Madison Square Garden. The arena had hosted the NIT since 1938, a run halted by COVID-19 for two years. The event was canceled in 2020 and played in Texas in 2021.