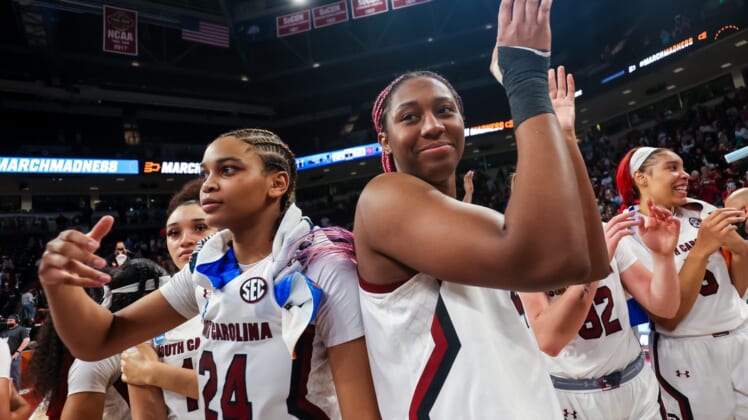 Top-seeded South Carolina put on a defensive performance for the record book in its win against 16th-seeded Howard, holding the Bison to one field goal and two free throws en route to a 44-4 lead at halftime in a first-round game in Columbia, S.C.

The Gamecocks set an NCAA Tournament record for fewest points allowed in a half of an NCAA Tournament game. The four points eclipsed the mark set by Prairie View, which was held to eight first-half points by Baylor in a first-round game in 2011.

South Carolina went on to win 79-21, which established another tournament mark for fewest points allowed in an entire game.

Iyanna Warren accounted for all of the Bison’s first-half points and finished with eight points.

The Bison shot 1-for-26 (3.8 percent) from the field and committed 13 turnovers that South Carolina converted into 14 points before halftime.

“I know we can’t have another game shooting-wise like we did and expect to win basketball games,” Gamecocks coach Dawn Staley told reporters. “We’ve got to find a way to get the ball to go in the hole for us.”

–Florida Gulf Coast’s Kierstan Bell showed why she chose to forgo her final year of college eligibility and enter the 2022 WNBA Draft in the 12th-seeded Eagles’ 84-81 upset of fifth-seeded Virginia Tech on Friday in College Park, Md.

Bell scored eight of her team-high 22 points in the final 4:51 to lead the Atlantic Sun champions (30-2) into the second round. Bell scored 18 second-half points and also finished with eight rebounds, three steals and two assists for the Eagles, who will look to advance to their first Sweet 16 when they face fourth-seeded Maryland on Sunday.

“When we were watching the selection show, we were wondering where we were at, and then when they announced that we were a 12 seed, we were all like, ‘OK, this is what they want to do to us,'” Bell said earlier in the week. “So we’re going to come out and show why we are better than a 12 seed.”

Bell, who entered the game averaging team-highs with 23.2 points and 7.4 rebounds per game, announced months ago that she would turn pro once the Eagles’ season ended.

Her announcement came during a season in which she missed nine games due to a partially torn meniscus. But she’s made her presence felt upon returning.

She was named the conference tournament’s MVP after earning the league’s player of the year. Bell will learn next week if she receives the Ann Meyers-Drysdale Award, presented annually to the best Division I shooting guard.