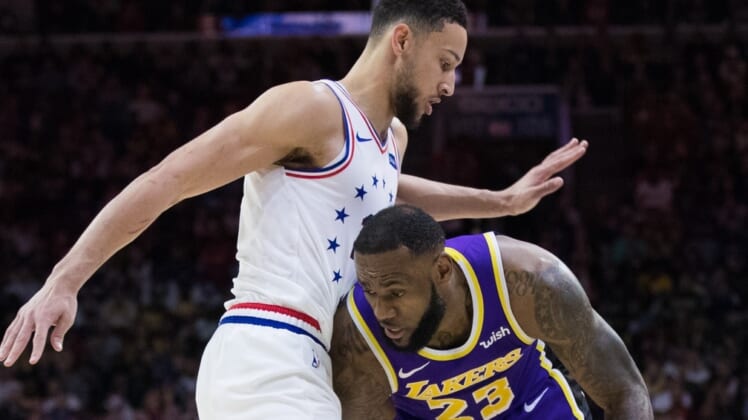 Every once in a while, someone prominent around the NBA world makes a comment that forces us to do a double take.

Ahead of his team’s game against the Philadelphia 76ers on Thursday, that’s exactly what Wizards head coach Scott Brooks did.

He was asked a question about Sixers point guard Ben Simmons during the pre-game presser, and decided to take that time to defend Simmons while comparing the youngster to LeBron James.

It really was something else.

Brooks is right in that Simmons lives in the low post and can create his own shot. The third-year player is shooting 53% from the field this season.

The issue here is that his game has not even expanded to the mid-range areas. It’s something James has had since his high school days. Despite those around the Association being in a hoopla over Simmons’ first career three earlier this season, that’s not the biggest knock on him.

In fact, the All-Star has regressed from a scoring standpoint this season. He’s averaging a career low 13.0 per. James has averaged 20-plus points in each of his first 16 NBA seasons. Sure he’s a top assist man around the Association. That’s Simmons’ forte.

However, it’s absurd to put a third-year player in the same category in terms of strength as someone who has been dominating the NBA landscape for the better part of the past two decades.

This might be nothing more than a coach talking up an opponent. But we really have to be careful when it comes to comparing the unproven to all-time greats. It’s something that has existed in the modern NBA world since Michael Jordan’s heyday in the 1990s.