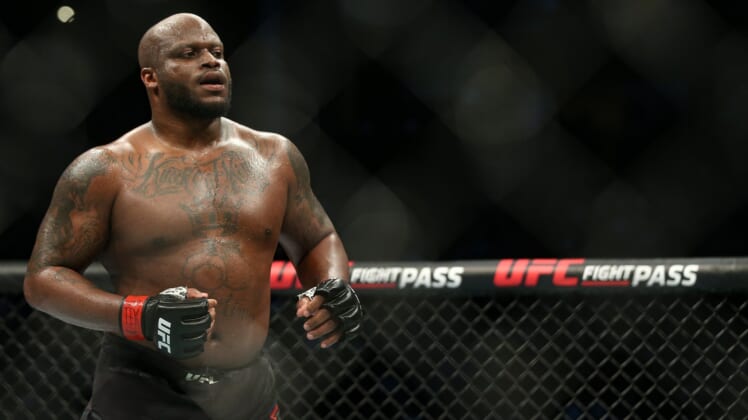 All eyes will be on Las Vegas for UFC 252 next weekend. Though, the action was in the desert metropolis Saturday evening for UFC Vegas 6 featuring a card headlined by Derrick Lewis taking on Aleksei Oleinik in a bout that could have wide-ranging ramifications in the heavyweight division moving forward.

In the end, the heavily-favored Lewis came out on top over his counterpart to put his name in the championship conversation with Stipe Miocic and Daniel Cormier doing battle for the title in that division next week.

These are among the biggest winners and losers from UFC Vegas 6 in Las Vegas Saturday evening. The results speak for themselves.

The 31-year-old Dariush entered Saturday evening’s bout against Scott Holtzman having won four consecutive fights. That included a knockout of Drakkar Klose in UFC 248 to put the Iranian-American on the radar. Though, no one could have anticipated what we saw from the lightweight contender in Vegas.

Dude knocked Holtzman out with a spinning back elbow. It was one of the most awe-inspiring highlights around the UFC world thus far this year. And it has Dariush thinking top-10 ranking moving forward. He’s going to be a star in the lightweight division.

The current Invicta FC Bantamweight Champion, this Lithuanian made her debut against Yana Kunitskaya Saturday UFC Fight Night in Las Vegas. In no way did it go according to plan for the 27-year-old Stoliarenko. She landed just six significant strikes compared to 43 for Kunitskaya.

In what can’t be considered too much of a surprise, this led to Stoliarenko losing via unanimous decision. This is not what the powers that be had in mind when they put Stoliarenko on the main card in Vegas. That won’t happen again any time soon.

It’s been a mixed bag for this middleweight veteran since he made his UFC debut back in 2016. That included a 5-4-1 record at this level heading into Saturday’s bout against Maki Pitolo. “The Dentist” would not be deterred, putting up what could have very well been the most impressive performance of his career.

Stewart, 29, took out Pitolo via the rare Guillotine Choke at the 3:41 mark of Round 1. UFC highlights:

It remains to be seen what this will mean for Stewart’s career moving forward. But it was a must win in his first UFC fight since October of last year.

Loser: Omari Akhmedov with brutal defeat at the hands of Chris Weidman

Ranked No. 11 in the middleweight division and coming off a win over Ian Heinisch in UFC 245 last November, this Russian wanted to make a statement. Could Akhmedov set up a potential title bout at some point in the future?

Both fighters seemed to be a bit tired as the bout dragged on in Vegas, each one landing a solid number of significant strikes while taking one another down multiple times. Though, it was Weidman who came out on top via a unanimous decision after winning Round 3. This was not how Akhmedov expected his most-recent trip to Vegas to go.

That didn’t take too long at all. The main event Saturday evening in Vegas lasted less than two rounds. Lewis dominated Aleksei Oleinik in every possible way throughout the duration of the lopsided fight. From taking his counterpart down in Round 1 in UFC Vegas 6 to this beat down to start the second round in these UFC highlights.

That’s about as violent as it gets right there. Derrick Lewis ended up landing 35 significant strikes compared to two for his counterpart Aleksei Oleinik. You can’t get much more dominant than that. It will also likely end up setting up a championship bout against the winner of Miocic-Cormier next week for Derrick Lewis.

This Russian entered Saturday’s action having won two consecutive fights including a victory over Fabricio Werdum in UFC 249 back on May 9. It was not to be against a vastly superior Derrick Lewis in this one.

As noted above, Aleksei Oleinik was dominated in every possible way. At this point, we’re not too sure where he goes from here. That was just humiliating.

Having already put up three submissions via the rear-naked choke, Tucker entered Saturday’s bout against Justin Jaynes on a pretty big roll. That did not stop in Las Vegas.

The middleweight contender brutalized Jaynes in Round 3, setting the stage for another RNC submission. As you can see here, it was pretty darn violent. This represents Tucker’s third consecutive win and has him on the radar of Dana White and Co.

Loser: “New Mansa” with first loss in over two years

Joaquin Buckley entered Saturday’s welterweight bout against Kevin Holland having won each of his past two bouts following a loss to Logan Storley in a Bellator match back in April of 2018. This also represented Buckley’s first ever UFC fight.

It did not go according to plan at UFC Vegas 6. Buckley was dominated throughout the first two rounds with Holland landing nearly twice as many significant strikes. In what can’t be too much of a surprise. Holland ended up taking Buckley down with a vicious right jab early in Round 3. This is not the way Buckley wanted to begin his UFC career. That’s for sure.