Following opening week wins, the Baltimore Ravens and Cincinnati Bengals did battle Thursday night in an all AFC North tilt. The winner would ultimately start the season 2-0 with sole possession of first place in the division.

Holding on to home field, Andy Dalton and the Bengals came out on top by the score of 34-23.

It’s a game that saw Joe Flacco’s first interception of the season lead indirectly to a touchdown pass from Dalton to A.J. Green to open the scoring. It was one of three first half touchdowns Green scored in a dominating performance.

These are among the winners and losers from Cincinnati’s hard-fought home win against the Ravens. 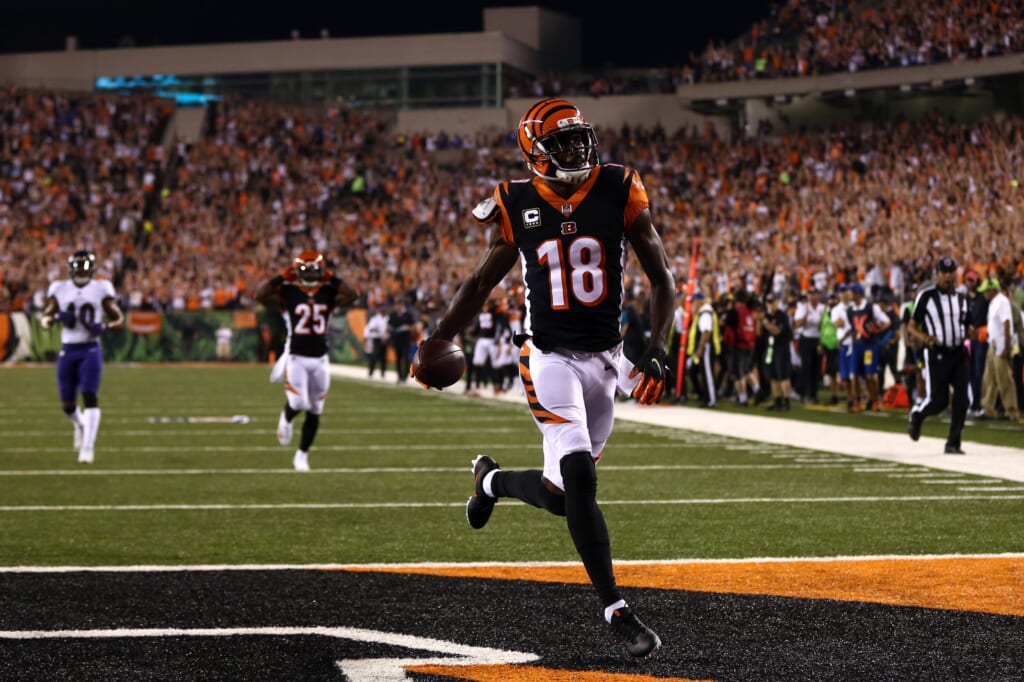 After putting up a touchdown in the season opener, Cincinnati’s top offensive weapon was back at it again Thursday night. Green put up just three first half catches. All three went for touchdowns, leading Twitter to absolutely losing its mind over the dominating performance against Baltimore.

It’s Green’s ability to make the big play that has defined his tenure in Cincinnati. It’s also something that has been missing with the team struggling over the past two seasons. If Thursday’s performance is any indication, the Bengals will be in a tremendous spot moving forward. After all, game-changing scores like this one (watch here) are not a dime a dozen.

Baltimore’s starting left guard had absolutely nothing to provide against recently-extended Bengals All-Pro defensive tackle Geno Atkins in this one. Before the first quarter was even over, Atkins had gotten to Joe Flacco for two sacks. He absolutely dominated the Ravens’ interior offensive line, Lewis included.

Flacco struggles with a clean pocket. That’s already known given how bad he’s performed since Baltimore’s Super Bowl run back in 2012. But when you’re able to put pressure on him from the interior of the defensive line, it causes even more issues. That was readily apparent early on Thursday evening.

Did Dalton just decide to revert back to 2015 form? What he’s now done through two games is quite simply remarkable. Seemingly regressing over the past two seasons, Dalton is at the top of his game. Thursday against Baltimore saw the former second-round pick complete 24-of-42 passes for 265 yards and four touchdowns. All four of those scores came before halftime with Dalton leading his Bengals into the locker room up 28-14.

As we mentioned in the Green blurb, the connection between quarterback to wide receiver promises to help Cincinnati remain afloat in the AFC North. Heck, this has been the most impressive squad in the division early in the season. Following an offseason in which Dalton’s future with the Bengals was in question, he’s more than proving himself right now. Thursday’s performance was a prime example of that. 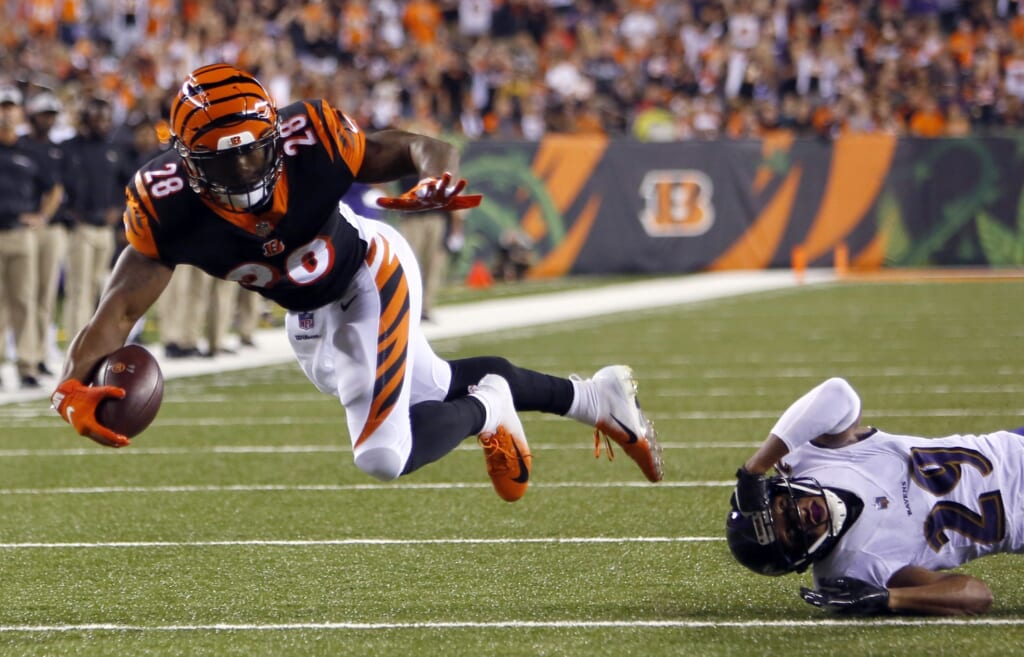 This still-young 22-year-old former first-round pick got a wake-up call big time against A.J. Green on Thursday. Being tasked with covering Cincinnati’s top receiver, Humphrey allowed two first half touchdowns. While he did perform better as the game went on, these two scores ended up being the difference in a 11-point Ravens loss.

It’s not terribly surprising that Humphrey struggled. He’s now played a grand total of 18 regular season NFL games, including seven starts. But the Alabama product is now going to be tested by every team moving forward. How he performs will tell us a lot about the Ravens’ playoff hopes.

If the likes of rookie Sam Hubbard and second-year player Carl Lawson continue to make strides, Cincinnati’s pass rush will end up being the best in the NFL. They join the likes of recently extended Pro Bowlers Geno Atkins and Carlos Dunlap to form a fearsome foursome.

That came out in droves Thursday against Baltimore. Cincinnati racked up four sacks and eight quarterback hits on Joe Flacco. For his part, Atkins accounted for two sacks while Hubbard put up his first regular season sack. Most of this pressure came early, enabling Cincinnati to open up a 21-0 lead.

We know very well that Joe Flacco loves to utilize his tight ends in the passing game. It’s why the Ravens boast four plus-level pass catchers at that position in the form of Nick Boyle, Maxx Williams, Mark Andrews and Hayden Hurst. With Hurst sidelined to injury, the other three failed to step up against a good Bengals defense.

When all was said and done, this trio caught 8-of-11 passes for 75 yards for an average of less than seven yards per target. With Dre Kirkpatrick and Co. shutting down the outside, that’s not good for anyone involved. It led to some major struggles in the passing game early on.

While Green was garnering most of the attention on the other side, Boyd did his thing against single coverage. The third-year pass catcher entered the season as a bigger part of Cincinnati’s offense following the departure of veteran Brandon LaFell.

He didn’t disappoint on Thursday evening, putting up 91 yards and a touchdown on six catches. That came on only nine targets for an average of north of 10 yards per target. That’s some really solid stuff right there. 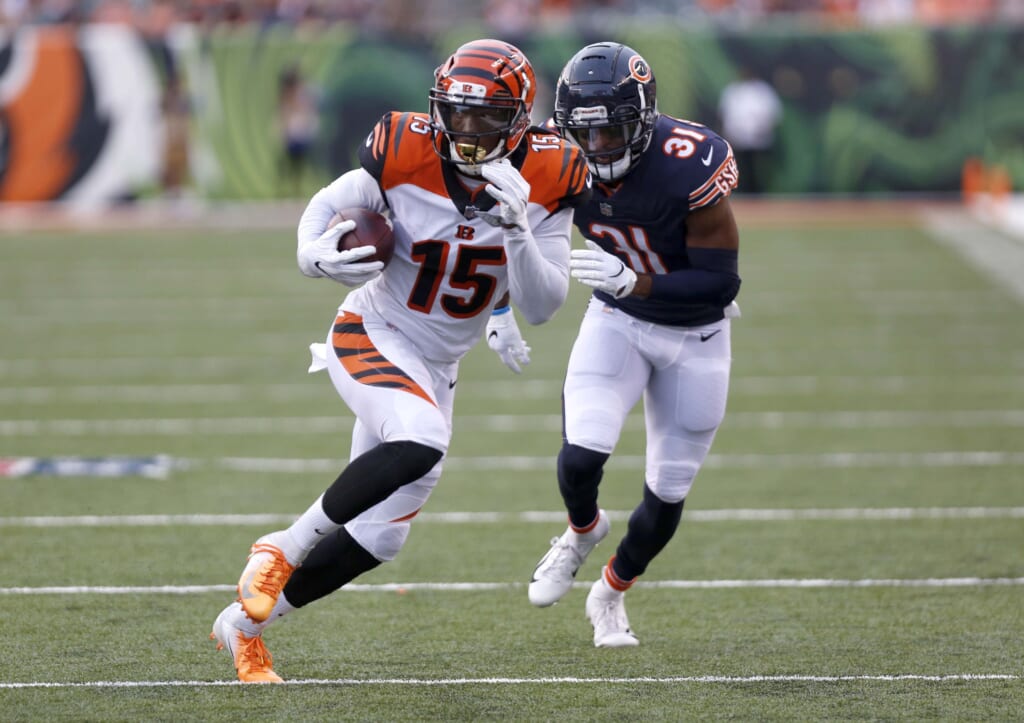 Fresh off scoring his first ever regular season touchdown last week, this first-round bust was back up to his old tricks against Baltimore. Ross caught just 1-of-4 targets for eight yards while finishing the game with five yards of offense. That’s just not acceptable.

Having seen the above-mentioned Boyd pass him up on the depth chart, performances like we saw Thursday night aren’t going to do Ross any favors moving forward. He was a no-show against a division rival on national television. It’s certainly not good optics.

Being thrown into the action after starter C.J. Mosley suffered an injury early in the game, this rookie fourth-round pick from UCLA showed well. Seen by most as a two-down backer, Clark more than proved he’s capable of shouldering a larger load.

The linebacker finished Thursday’s loss to Cincinnati having racked up 13 total tackles, one tackle for loss a pass defended and a quarterback hit. He was all over the field for a Ravens defense that needed this production after A.J. Green’s early-game domination.

Speaking of being a no-show, Suggs came up small in a game that he needed to provide some sort of a pass-rush spark. The future Hall of Fame linebacker failed to record a single tackle. He didn’t apply a single pressure, quarterback hit or sack in the loss.

This could very well be a sign that the 35-year-old pass rusher is finally slowing down. Then again, it did come on a short week against a plus-level offensive line. Either way, Suggs’ struggles played a role in Cincinnati putting up a healthy 34 points in this one.