Winners and losers from Steelers win over the Titans

The Pittsburgh Steelers took care of business in a big way against the Tennessee Titans on Thursday night, winning by the score of 40-17. For Pittsburgh, this represents the team’s fifth consecutive win on the season. It also currently boasts the best record in the AFC heading into Sunday’s action.

On the other side, Tennessee absolutely screwed the pooch on national television. With a chance to move to 7-3 on the season, Marcus Mariota and Co. put up a disastrous overall performance.

Here’s the biggest winners and losers from Pittsburgh’s win over Tennessee on Thursday Night Football.

Filling in for the injured Joe Haden Thursday night, Sensabaugh made his impact known big time against Tennessee. It came late in the second quarter with Pittsburgh leading 10-7 in a tight affair.

The Titans were driving around midfield when the former mid-round pick jumped a route on Marcus Mariota, picking off the pass in the process and returning it 32 yards to the Titans’ 20.

Pittsburgh would ultimately kick a field goal to go up six before adding another one prior to the half. The interception itself came on first down, so there’s no telling how Tennessee would have performed for the remainder of the drive. It most definitely was a momentum killer for the road team.

After matching a career high with 10 targets last week against Cincinnati, this rookie top-five pick was nowhere to be found Thursday night. Despite seeing north of 50 snaps in this one, Davis recorded a grand total of three catches for 27 on seven targets.

In a game that it was apparent the Steelers’ secondary was going to be all over Marcus Mariota, the quarterback really needed his young receiver to step up. That didn’t happen here. And now through his first five NFL games, Davis has caught 16-of-35 targets. Not good.

On the other side of the ledger, Matthews did what he could to help an ailing and struggling Mariota out. He caught five passes for 113 yards, including this career-long 75-yard scoring strike from Mariota to open the second half.

On the first play of the second half…

This is simply a continuation of what we’ve seen from Matthews since he came over to the Titans from Miami last season. Entering Thursday’s action, the veteran had recorded 101 receptions for 1,458 yards and 11 scores in 25 games with the Titans. It’s clear he’s Super Mario’s favorite wide receiver right now.

It’s now abundantly clear that the enigmatic Bryant is below rookie JuJu Smith-Schuster on Pittsburgh’s depth chart. He saw north of 40 snaps in the game (an increase from previous weeks), recording two catches for 30 yards on four targets.

Sure Bryant did well to recover an Antonio Brown fumble in this game. That’s a positive. But anyone expecting this talented receiver to take on a larger role after Pittsburgh decided not to trade him can pretty much throw that out the window.

Much like the rest of Pittsburgh’s offense, Big Ben has been uneven this season. He entered Week 11 having thrown 12 touchdowns compared to 10 interceptions on the season. There was some concern that the 35-year-old veteran simply didn’t have it anymore. That he had hit that proverbial quarterback wall.

If one game tells us anything, that was all just a false narrative. Roethlisberger shined in a big way en route to helping his Steelers to a 40-17 win and an 8-2 start to the season.

He completed 30-of-45 passes for 299 yards with four touchdowns and zero picks in the game. It was his best statistical output since Week 5 of the 2016 season. And that’s a scary thought for potential AFC Playoff opponents in January. 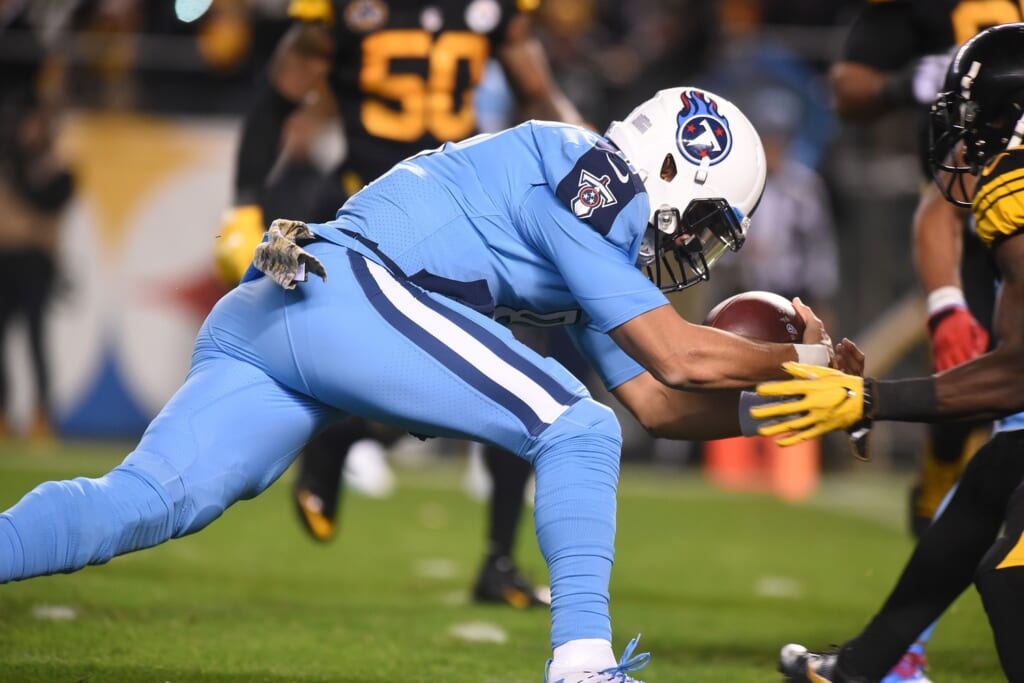 Mariota might have entered Thursday’s game banged up. Tennessee’s offensive line did very little to help him (five sacks, nine hits), and it was unlikely he’d be able to lead the Titans to a win in a high-scoring affair against Pittsburgh.

Even then, the former Heisman winner absolutely stunk up the joint in Week 11. He threw four interceptions, three of which were directly his fault. Three of the interceptions also set up Pittsburgh field goals.

All said, Mariota finished the game having completed 22-of-33 passes for 306 yards with one score and those four picks. In no way is that a winning formula.

What else can we say about Brown that has not already been said? He started this game off with a tremendous 41-yard touchdown from Big Ben to open the scoring (watch here). After putting up another touchdown in the third quarter, Brown might have recorded the best scoring grab of the season (watch here).

Like he has been pretty much throughout his career, Brown looked like a man among boys. When the clock struck zero at Heinz Field Thursday night, he had tallied 10 receptions for 144 yards and three scores. That’s just plain stupid.