The first month of the 2017-18 NBA season brought breakout teams and players, unexpected slumps, rising stars and too many injuries. And those factors have shaped the standings.

It’s important to remember this isn’t a forward-looking prediction. Rather, it’s a recap of what has happened. While several teams and players deserve credit or criticism, the perception surrounding a given group could change this season — if not this upcoming month.

Even after losing Gordon Hayward on opening night, the Boston Celtics have thrived in 2017-18. They shook up the roster in order to acquire both Hayward and Kyrie Irving, but the changes have improved the team. Jaylen Brown has taken a massive step in his development, and the learning curve for rookie Jayson Tatum hasn’t required as much time as expected.

The result is an ongoing 15-game winning streak that features triumphs over the San Antonio Spurs, Toronto Raptors and Golden State Warriors. Hayward likely won’t suit up this season, but Boston is a real threat to Round 4 of Cleveland vs. Golden State in the NBA Finals.

Not being able to win is one thing, but looking entirely unfit to compete is another. Punching each other doesn’t help, either. Nikola Mirotic has been sidelined while recovering from multiple fractures in his face, and Chicago has missed his offensive impact.

Only the Kings are less effective on the scoring end of the floor. The Bulls rank 29th in offensive rating (95.1) and true shooting percentage (50.5). Throw in a 106.9 defensive rating that is 23rd in the league, and the result is a 3-11 team seemingly destined for a coaching change.

There might not be a more volatile team than the Pistons, who have defeated the Warriors yet lost to the Los Angeles Lakers already in 2017-18. But it appears we should take Detroit seriously.

Stan Van Gundy’s squad has posted the ninth-best offensive rating, per NBA.com. One major reason for the ascent is the Pistons are shooting 38.2 percent from three-point range compared to 33.0 last year. After checking in at 28th in the league, they’re now sixth. The combination of adding Avery Bradley and having a healthy Reggie Jackson is working wonders in Detroit. 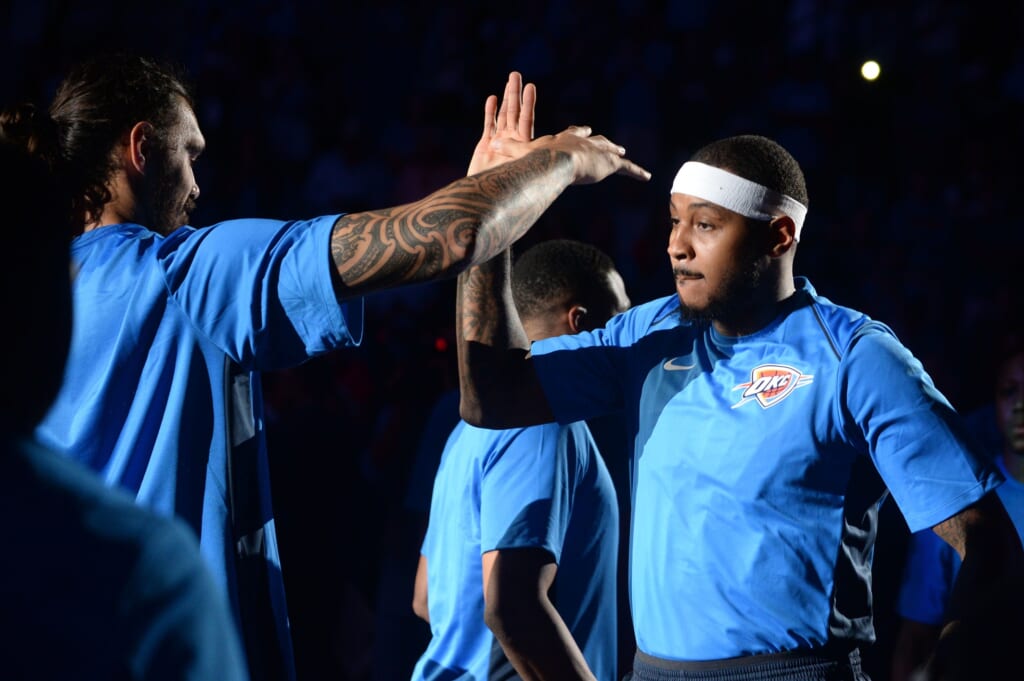 We knew trying to integrate a pair of superstars into an offense that includes the reigning MVP would be a huge challenge. That trouble is showing up when it matters most. Oklahoma City has trudged to a 7-8 record despite not losing a game by more than 10 points. And the team’s clutch-time numbers — when the margin is plus/minus five points in the final five minutes — are dreadful.

Westbrook and Paul George share identical marks of a 104.5 offensive rating and 150.8 defensive mark, per NBA.com. Carmelo Anthony has equally ugly clips of 94.2 and 139.7, respectively. Once that changes, the Thunder will start winning a few close games.

What a difference one summer makes. Last season, the Raptors recorded the lowest assist rate in the league. Only the Phoenix Suns (49.1) were even close to Toronto (47.2), and the Suns managed 24 wins all year. The Raptors have committed to increased ball movement, and they’ve soared to a 57.1 assist rate that is 14th in the league.

In simpler numbers, Toronto failed to tally 20 assists in half of its games last season. This year, the Raptors have 20-plus dimes in 12 of 16 appearances. Whether they can avoid old habits when the playoffs arrive is a different story, but this is a highly encouraging start.

The Clippers sprinted out to a 4-0 record, and after falling to Detroit and Golden State they picked up a victory over Dallas. At 5-2, they were a pleasant surprise in the early stages of the post-CP3 era.

Yeah, so, that hot start didn’t last. Los Angeles has dropped eight straight games. Similar to Oklahoma City, it’s because the Clippers disappear in clutch moments. Their offensive rating of 77.5 and net rating of negative-51.1 during the final five minutes of a five-point game rank 30th and 27th, per NBA.com. This team certainly misses Paul’s presence in the backcourt. 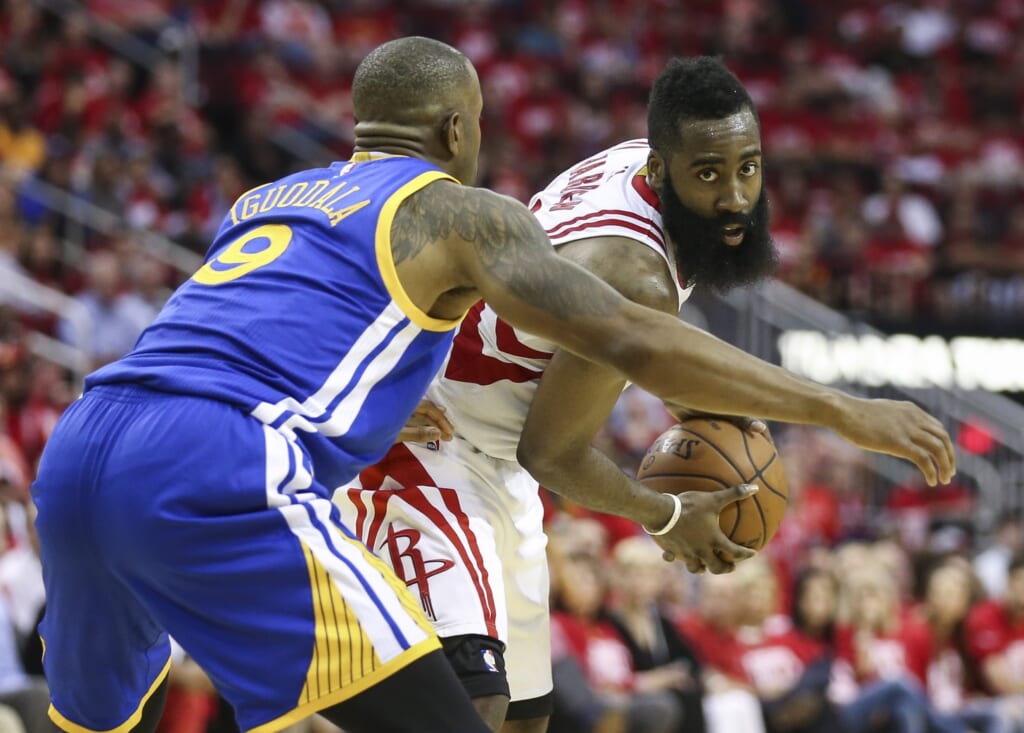 Chris Paul helped the Rockets edge Golden State on opening night, but a knee injury sidelined him for 13 games. No problem. James Harden is still pretty good. Last season’s MVP runner-up, the sweet-shooting lefty, stands atop the NBA with 31.6 points per game. Harden has poured in 40.4 percent of his three-point attempts while launching a league-high average of 11.1 treys. Plus, he leads the Association with 9.9 assists per game.

Even without CP3 filling in the minutes when Harden hit the bench, Houston only trails Golden State for the NBA’s best offensive rating.

The Jazz would likely be a factor in the Western Conference playoff race if they were healthy. Missing star center Rudy Gobert for an entire month, however, could be hugely problematic for that pursuit. Before Dion Waiters crashed into Gobert’s right knee, Utah boasted the league’s No. 3 defense, according to NBA.com. In the games since then, the Jazz have plummeted to 20th.

The upcoming slate of opponents isn’t necessarily daunting, but Utah has a ruthless mid-December slate right around the time Gobert could return. If the team cannot hang on until then, the Jazz might fall out of the playoff picture before January begins.

This might be hard to believe, but playing better perimeter defense and shooting more effectively from beyond the arc is working for Minnesota. Last season, the Timberwolves had the eighth-worst three-point defense. This year, they sport the eighth-best mark. Plus, the offense has climbed from 20th to 12th in three-point percentage.

Minnesota is by no means a finished product on defense, but a 10-6 start while incorporating several new faces is outstanding. The Wolves should be a top-six team in the West this season.

Picking up victories against bottom-feeders like Atlanta and Chicago — and to date, the Clippers — are necessary for teams realistically eyeing the postseason. The Heat should be winning those games, and they’re a perfect 5-0 against clubs with losing records. But there aren’t many lessons to learn in a matchup like that.

When a quality opponent takes the floor, Miami has struggled. In 11 contests against teams .500 or above, the Heat are a paltry 2-9. Although it’s certainly not time to panic, Miami needs to start knocking off some playoff contenders. 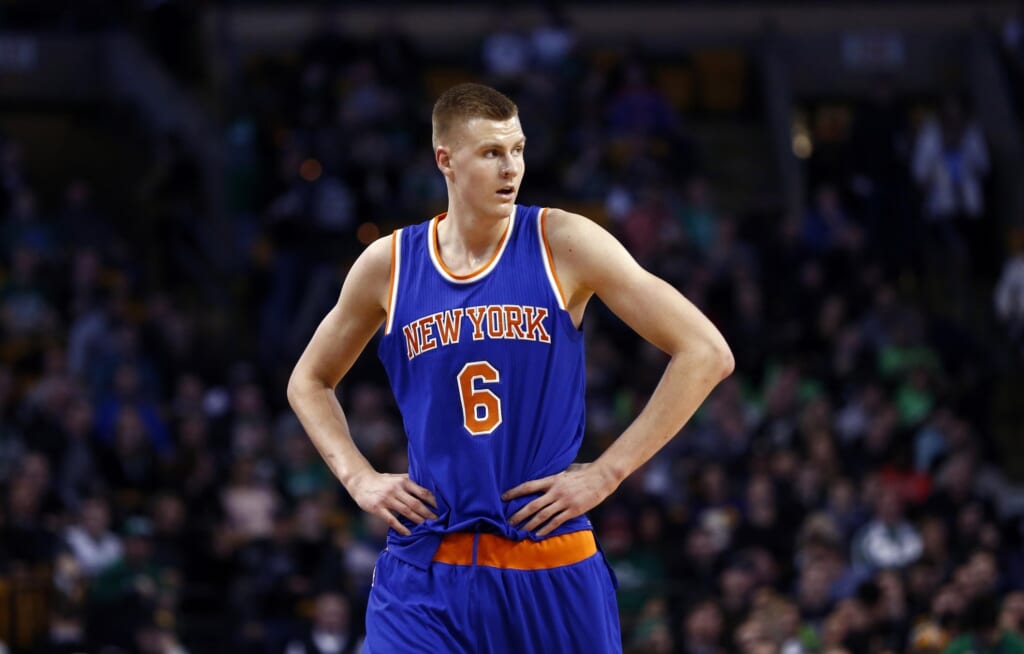 Anthony’s departure has pushed Kristaps Porzingis onto center stage. He’s not afraid of the spotlight. The third-year center has propelled the Knicks to an 8-7 record, tallying 27.8 points on 48.1 percent shooting along the way. Additionally, Tim Hardaway Jr. has recovered from a horrible opening to the year, eclipsing the 20-point mark six times in the last 11 games.

New York typically is still overwhelmed against top competition, but a passionate fan base can be encouraged by the franchise’s direction. Navigating a favorable upcoming month is crucial for the Knicks to have real playoff aspirations.

What is the product of the NBA’s least-efficient offense and the third-worst defense? A 4-12 record is a good place to start. The rebuilding Kings have a few respectable wins — Oklahoma City, Philadelphia and Portland — this season, but they’re often a complete disaster. Of the 12 losses, eight are by double digits. Even worse, Sacramento has five 20-point defeats. That’s not even feigning competitiveness.

Without question, the 2017-18 campaign is mostly about figuring out which young players should be key pieces of the Kings moving forward. But in the meantime, they’d certainly enjoy having a few more chances to win.

Antetokounmpo’s improvement would be good enough for an individual “winner” slot, but the Bucks also traded for Eric Bledsoe without sacrificing promising players like Malcolm Brogdon or Thon Maker. Although Bledsoe hasn’t been a seamless addition on offense, he’s encouraged a three-point surge from Khris Middleton and steadied Milwaukee’s defense. Once this roster figures out how to play with Bledsoe, the Bucks will be a dangerous foe in the East. 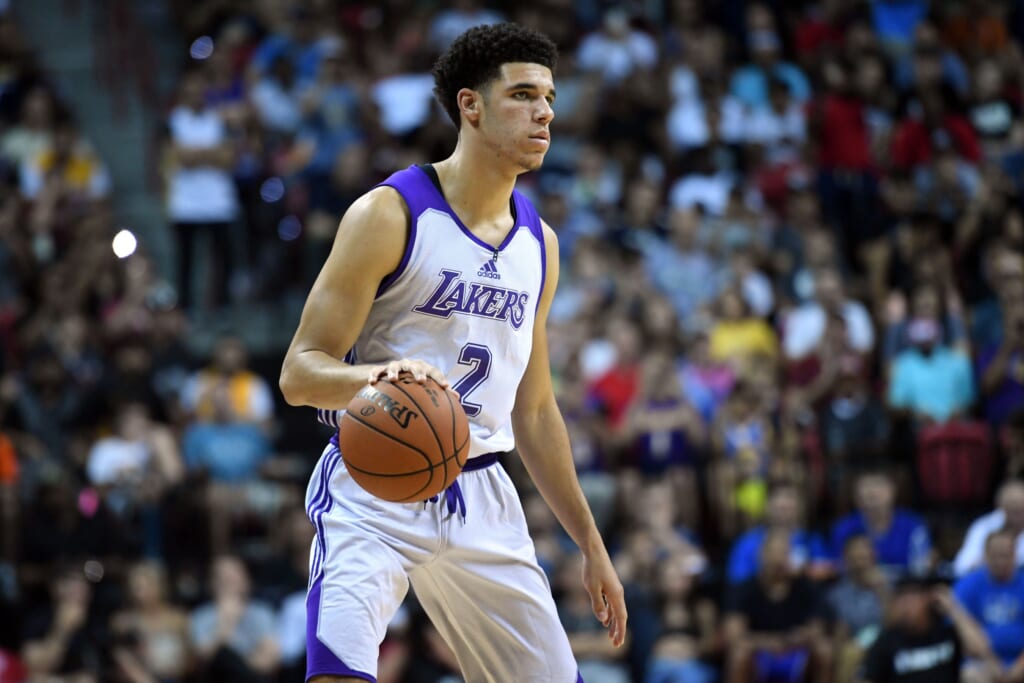 As a whole, the Lakers aren’t doing terribly. They’re a respectable 7-10 with the league’s fourth-best defensive rating, per NBA.com. Los Angeles isn’t getting much positive production from its touted rookie, however.

Lonzo Ball has labored through his introduction to the NBA, shooting just 22.8 percent from three-point range and 31.3 percent overall. No point guard in the league has a lower Real Plus-Minus, according to ESPN. The No. 2 overall pick of the 2017 draft is nowhere close to a bust, but Ball has plenty to prove at this level.

Shutting down Markelle Fultz was a wise choice. It’s disappointing he’s not on the floor, but the 76ers have become of the league’s most enjoyable teams anyway. That’s what happens when Joel Embiid and Ben Simmons are both healthy, apparently.

Embiid, the fun-loving center, has racked up 22.8 points, 10.9 rebounds, 3.5 assists and 1.8 blocks per game. Simmons has starred as a point guard, averaging 18.1 points, 9.1 rebounds, 8.0 assists and 1.9 steals during the opening to his debut season. And at 8-7, the Sixers are hanging around the middle of the Eastern Conference standings.

The Hornets have helped Dwight Howard regain some of his prior effectiveness, but they’re caught in a slump. After starting the campaign 5-3, Charlotte dropped six consecutive games — including a loss to the middling Bulls.

Injuries were largely to blame for that streak, since Michael Kidd-Gilchrist missed a three-game stretch while Nicolas Batum still hadn’t made his season debut. The team boasts a plus-14.4 rating with MKG on the floor, per NBA.com, so his availability his essential. Fortunately for Charlotte, it shouldn’t be reaching for the panic button when the roster is healthy.

Neither Kawhi Leonard nor Tony Parker have played a single game this season, yet the Spurs are 10-6 anyway. The LaMarcus Aldridge-led offense hasn’t been spectacular, but San Antonio has atoned for the current shortcomings by controlling the tempo and playing excellent defense.

No team has utilized a slower pace than the Spurs, per NBA.com, and their 101.6 defensive rating is sixth-best in the league. That’s quite impressive, considering they’re missing a two-time Defensive Player of the Year in Leonard. As if there was any concern, the franchise is headed for its 21st consecutive playoff appearance. 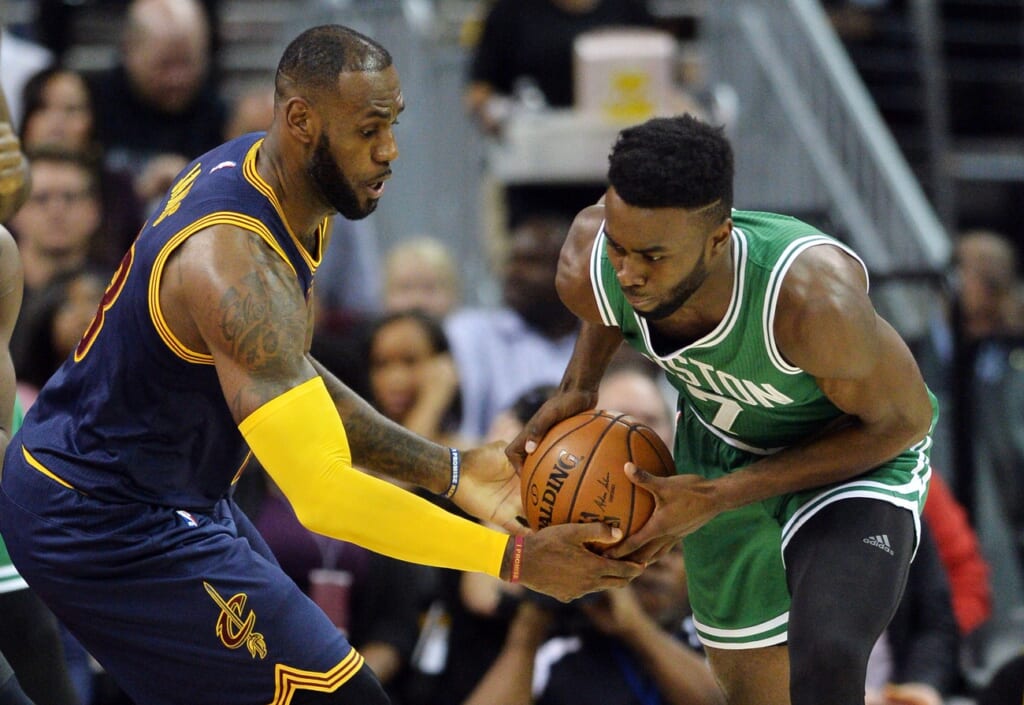 Among teams in the “loser” category, the Cavaliers are in the best shape. That concession doesn’t change Cleveland’s enormous problems on defense. So far, the Cavs own the league’s worst defensive rating, according to NBA.com. Only the Timberwolves, Mavericks and Wizards have been less effective defending shots within five feet.

Cleveland appears to have shaken an ugly 4-6 start, rattling off five victories in its last six games. But if the defensive problems flare late in the regular season or during the playoffs as fatigue becomes a factor, it won’t be a surprise.

Largely thanks to in-house development, the Nuggets have improved substantially in 2017-18. Nikola Jokic is a do-everything star averaging 15.6 points, 11.3 rebounds, 4.5 assists and 1.4 steals, and Denver boasts a plus-12.1 rating with him on the floor, per NBA.com.

Additionally, both Jamal Murray and Emmanuel Mudiay are providing more offense than last season, while Gary Harris remains a regular contributor. Paul Millsap’s numbers have dipped since signing a massive contract, but he’s been a steady veteran for a young team. Though the Nuggets need to start winning on the road, they’re trending the right way.

Things are not good in Atlanta. Other than a bizarre triumph over Cleveland, the Hawks’ only victories happened against the Mavericks and Kings — the worst teams in the Western Conference. Atlanta ranks 22nd in both offensive and defensive rating while grabbing the second-fewest number of available rebounds.

On the bright side, the Hawks are the No. 3 three-point shooting team in the league, so it’s not all bad. But having the NBA’s worst defensive rating in the fourth quarter (113.4) is a key reason Atlanta is struggling to finish with wins.