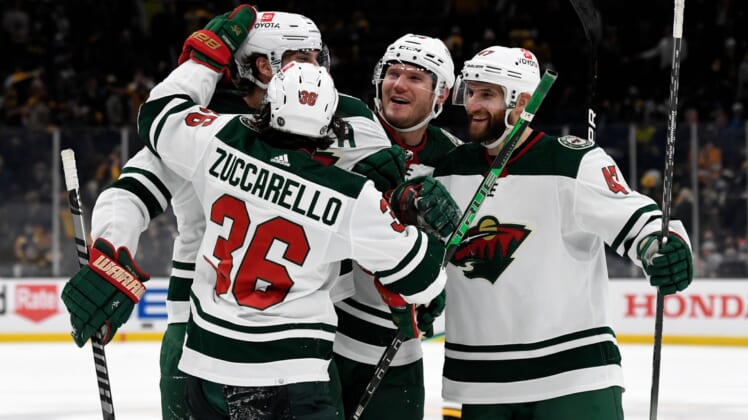 The Minnesota Wild will go for back-to-back wins when they host the Washington Capitals on Saturday night in Saint Paul.

Minnesota is coming off a 3-2 win over the Boston Bruins on Thursday night, which snapped a five-game winless streak. Kirill Kaprizov, Nico Sturm and rookie Matt Boldy each scored for the Wild in the victory.

However, Kaprizov sustained an upper-body injury and will not be available against Washington.

“If Kirill misses a game, that’s not good, right?” Wild head coach Dean Evason said. “You’ve got a guy as gritty and determined as he is, and he loves the game. If he can’t play then, no, we’re not optimistic at all. … It’s serious enough that he’s not going to play (Saturday) so hopefully it’s not even more serious than that.”

No one within the Minnesota organization has cooled the pressure off Bruins forward Trent Frederic, who insists that he did not mean to injure Kaprizov.

“We thought it was an unnecessary hit on a vulnerable player and I hope the league looks after it,” Evason said. “We don’t believe that’s a hockey play. The puck’s sitting there. They can grab the puck. Instead they chose to finish a guy that was in a vulnerable position with his back to us, and we lost a great player in our league because of it.”

As the Wild look to keep rolling, Washington hopes to regroup. The Capitals will try to recover after giving up five unanswered goals in a 5-1 loss on Friday night in St. Louis.

Washington has dropped two straight following a 4-3 overtime loss against the New Jersey Devils last Sunday. That snapped a two-game winning streak for the Capitals, who posted a 5-3 win over the Nashville Predators on Dec. 29 and a 3-1 win over the Detroit Red Wings on Dec. 31.

Alex Ovechkin leads the Capitals with 50 points (24 goals, 26 assists) in 35 games this season. The 36-year-old Ovechkin potted a pair of goals against Detroit but has not recorded a point in the last two games.

Ovechkin is seeking his second Stanley Cup ring since leading the Capitals to their first title in 2018.

“This is the smartest I’ve seen him play in the offensive zone — getting pucks to the right area, making plays, rebound goals,” Capitals general manager Brian MacLellan said earlier in the season. “He’s making a lot more plays in the offensive zone. It’s been gradual, but this year looks different. It looks like he’s a smarter player, reading the whole game.”

The Capitals now will try to bounce back on short rest against Minnesota.