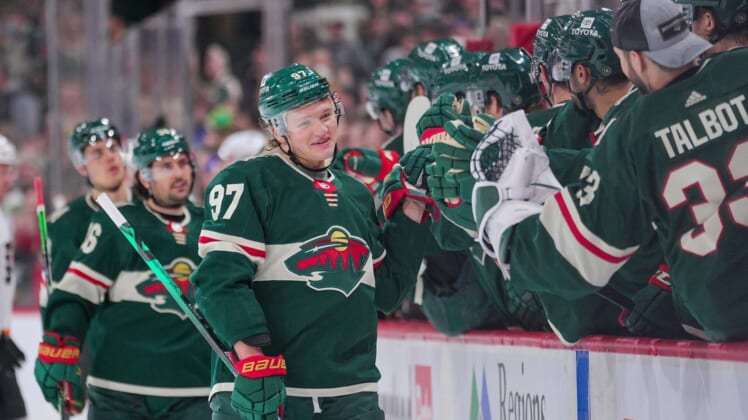 The Minnesota Wild appear to be getting hot at the perfect time.

As the regular season nears its final month, Minnesota has won seven straight games to assert itself as a strong contender in the Western Conference. The Wild have outscored opponents 23-10 during their winning streak.

Minnesota will look to make it eight wins in a row when it hosts the Pittsburgh Penguins on Thursday in St. Paul. Another victory would match the team’s season-high eight-game win streak from Nov. 24-Dec. 9.

“We’re rolling right now, all four lines, the defensemen, both the goaltenders,” Wild forward Kevin Fiala said. “Everyone’s on board.”

Pittsburgh would love to spoil the party.

The Penguins are looking to break out of a mini-slump as they begin a quick two-game road trip. Pittsburgh won five of six games from March 11-22, but since then it has lost three of four.

A 3-2 loss against the New York Rangers on Tuesday marked the Penguins’ latest setback.

Pittsburgh head coach Mike Sullivan praised his team’s effort but said a couple of hard-earned goals by the Rangers made the difference in the game. He noted that two of New York’s goals happened because of traffic in front of the net that led to screens and or deflections.

“Those are both just traffic at the net,” Sullivan said. “You make the sight lines difficult, get a stick on it. It just seems like in today’s NHL that so many of the goals are scored in that fashion. So we’ve got to be willing to do more of that consistently.

“When you look at the makeup of our team, we tend to hang on to pucks and look for more quality than quantity. … We’ve got some playmakers that aren’t just going to throw pucks to the net. I think we can adopt a little bit more of that mindset, though, and try to find a modified approach.”

The Penguins will have to do something to try to solve the Wild’s red-hot goaltending tandem. Marc-Andre Fleury, a former Pittsburgh star, is 2-0 with a 1.50 goals-against average and .948 save percentage in two starts with the Wild since arriving before the trade deadline. Cam Talbot is 27-12-1 with a 2.80 GAA and .911 save percentage, and he is coming off a 40-save performance against the Colorado Avalanche in his most recent start.

Wild forward Kirill Kaprizov is one point shy of matching the franchise record for points in a single season. Kaprizov has 37 goals and 45 assists for 82 points, and he has a chance to tie or surpass Marian Gaborik’s record of 83 points set during the 2007-08 season.

This is the second and final meeting of the regular season between the teams. Minnesota squeaked out a 5-4 shootout victory Nov. 6 in Pittsburgh.