Why the Warriors are not trading D’Angelo Russell 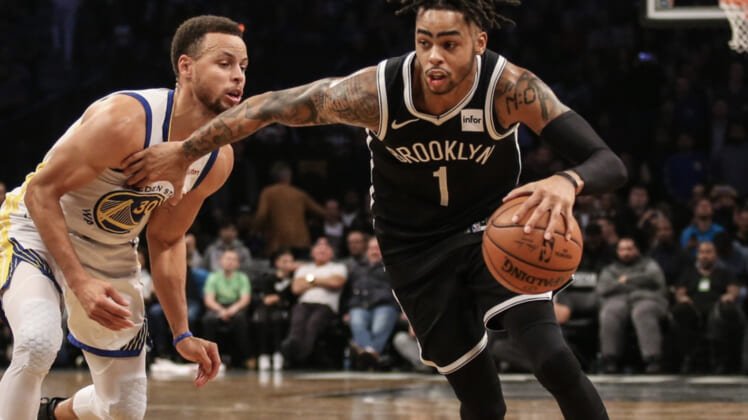 Ever since the Golden State Warriors acquired D’Angelo Russell in a sign-and-trade for Kevin Durant, there’s been talk about them flipping him.

This makes absolutely no sense. General manager Bob Myers and Co. pulled a rabbit out of their hats by picking up the young All-Star guard.

No matter if he’s a genuine fit with Stephen Curry in the backcourt, the Warriors are going to see this thing through. If it proves to be a failure, the Warriors could trade Russell next offseason.

It’s not happening until then. Here’s why.

An off-season trade is impossible: People get lost in the details.

D’Angelo Russell is very good: There’s a reason he was the No. 2 overall pick.

The value will be there: Golden State can move Russell next summer.

This is point is pretty big. Russell might not fit well in a three-guard lineup with Curry and Thompson. By acquiring him, Golden State is hoping to make it work. There’s reason for optimism here.

But in the event that it does not work out, the Warriors have a real opportunity to land key pieces in a Russell trade next July.

In addition to Russell being on a max deal, Golden State boasts a trade exception of $17.5 million after sending Andre Iguodala to the Memphis Grizzlies. These are two key assets for the Warriors to go big or go home.

Pure speculation here, but the possibility of landing a Bradley Beal or another young star could then be in the cards. Maybe Giannis Antetokounmpo and the Bucks take a step back this season. The Warriors are already interested in him.

At that point, the reigning NBA MVP would have just one year remaining on his contract. Could that set up a blockbuster trade similar to the deal that sent Anthony Davis to the Lakers last month? Stranger things have indeed happened.

Makes Warriors title contender: The downfall of this dynasty is premature.

The Warriors were lucky and brilliant to be able to add someone of Russell’s ilk when it looked like they were going to lose Durant for nothing.

There’s absolutely no reason to believe this team is simply going to flip him for future assets ahead of next season.

Golden State wants to see how the Russell-Curry-Klay trio will work. If it’s proven to be a failure or the possibility of adding a bigger star with the assets they have come up, the Warriors will consider it next summer.

But it’s not happening before then.