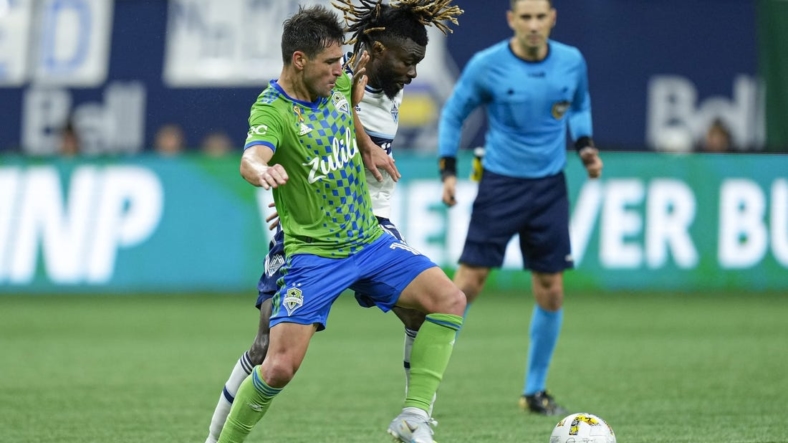 Pedro Vite and Julian Gressel scored first-half goals as the Vancouver Whitecaps kept their MLS postseason hopes alive while damaging visiting Seattle’s with a 2-1 victory against the rival Sounders on Saturday night.

Goalkeeper Thomas Hasal made two saves, including a diving stop in second-half stoppage time, for the Whitecaps (11-14-7, 40 points), who won their second in a row to move past Seattle into ninth place in the Western Conference and within three points of the seventh and final playoff spot.

Will Bruin scored on a header in the 89th minute off a cross from Fredy Montero for the Sounders (12-16-3, 39 points), who had a two-match winning streak snapped. Seattle, which has never failed to reach the postseason since joining the league in 2009, remained four points back but has three regular-season games remaining, one more than the Whitecaps.

Vancouver’s victory also snapped a 15-match winless streak against the Sounders (0-10-5), which included a 4-0 Whitecaps loss June 14 in Seattle.

The Whitecaps, coming off a 3-0 victory Wednesday against the Los Angeles Galaxy in which they scored all three of their goals in the second half, kept up the offensive momentum in the opening 45 minutes Saturday.

Vite, who scored his first career MLS goal against L.A., opened the scoring in the 29th minute. The Whitecaps worked the ball from midfield down the left wing, where Ryan Gauld made a move past a defender near the end line and sent a hard, low cross for Vite. He then hit a left-footed one-timer from just inside the penalty spot into the lower far corner of the net, leaving Sounders goalkeeper Stefan Frei no chance.

The Whitecaps extended their lead in the 37th minute. A long throw-in from Luis Martins on the left wing was headed out of the penalty area by Seattle’s Yeimar, but Gressel, a defender, charged forward and put a right-footed volley from 20 yards into the upper right corner of the net, just beating a leaping Frei.