White Sox get to Shane Bieber, Guardians to earn split 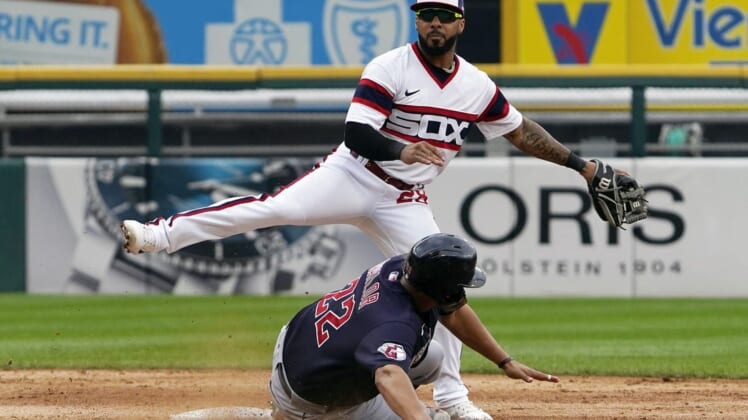 Leury Garcia and AJ Pollock homered in the second inning off Bieber (4-6), who had allowed three homers in his previous 10 starts and seven overall. Eloy Jimenez also connected in the sixth inning as the White Sox hit at least three homers for the eighth time

Chicago’s power display supported a third straight scoreless outing by Cease (10-4), who allowed seven hits and extended his scoreless streak to 20 2/3 innings. Cease struck out four and walked one in his 97-pitch outing.

Franmil Reyes hit a two-run homer and Steven Kwan also went deep as the Guardians lost for the second time in seven games as they rested Jose Ramirez. It was the fourth time the star third baseman did not play this year.

Cease allowed two-out singles to Josh Naylor and Reyes in the first before escaping trouble. He struck out Myles Straw to end the second with a runner on third and ended the third inning by getting Reyes on a double play after Amed Rosario doubled and Naylor singled.

Cease was hit in the upper leg by a 98.1-mph comebacker by Kwan in the fifth but retired Rosario to end the inning. He ended his outing by stranding two in the sixth.

Jimmy Lambert pitched a scoreless seventh and Kendall Graveman ended the eighth after allowing Reyes’ homer. Liam Hendriks retired Reyes to end the game after allowing Kwan’s second career homer with one out in the ninth.

The White Sox opened a 2-0 lead when Garcia hit a 3-1 fastball that just cleared the right field fence. After Garcia’s third homer of the season, Pollock lifted a breaking ball over Chicago’s bullpen into the left field seats for a 5-0 edge.

Jimenez made it 6-0 when hammered Bieber’s 1-0 slider into the left field seats to open the sixth.