When it Comes to Browns QB Johnny Manziel, Talk is Cheap

In the NFL, a long and productive career is promised to no man. It matters not where a player was drafted, which team selected him or how well he performed in college—the NFL can be a cruel business, where the time to develop into a starting-caliber player is ever-shortening. It’s a lesson learned by many players, and one that Cleveland Browns quarterback Johnny Manziel cannot ignore.

Manziel is on a campaign to not only redeem his persona but also his career. The Browns selected Manziel in the first round of the 2014 NFL draft, moving up four spots to do so. Their assumption was that he could be the franchise quarterback the team has lacked since coming back into the league in 1999 and recreate some of the magic he had at the helm of Texas A&M’s offense during his collegiate career. The Browns looked past much of the baggage associated with the quarterback—namely, his high-profile partying—in hopes that Manziel could provide stability at the position.

Courtesy of USA Today Sports: Manziel’s taken the first step to recovery on and off the field.

Manziel was initially defiant about his behavior—behavior, he said last June, that would not affect his ability to do his job at a high level. In speaking at the rookie symposium last summer, Manziel said:

He added, “I’m not going to change who I am for anybody.”

But Manziel had to change, not just to save his career but to save himself in the process. After an offseason peppered with reports of Manziel partying hard—champagne swan, money phone—and a disappointing rookie campaign in which he initially couldn’t beat out incumbent starter Brian Hoyer and then, when he eventually did, looking absolutely unprepared for the job, Manziel took initiative. He checked into rehab, ostensibly for his issues with alcohol, in February, leaving just before the Browns’ voluntary workouts began. And he’s recommitted himself to football, at least according to his new offensive coordinator John DeFilippo. 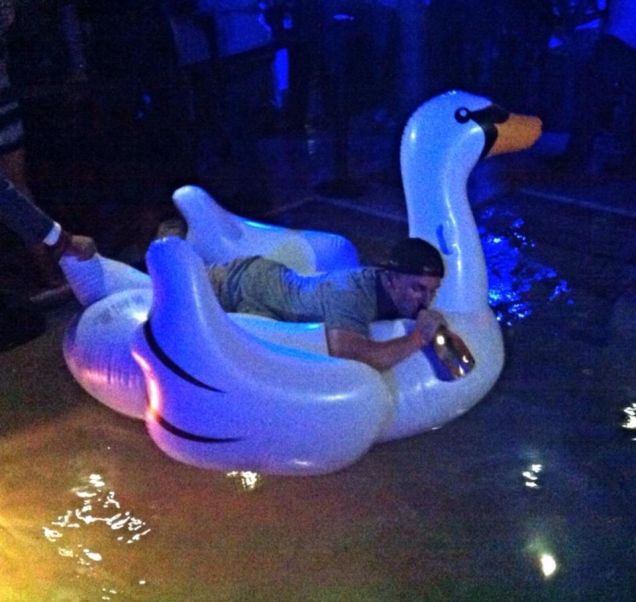 According to the Cleveland Plain Dealer‘s Mary Kay Cabot, DeFilippo is impressed with Manziel so far, saying,

Johnny’s been great… He’s spent every hour that he’s been allowed to spend in this building. We give them worksheets every Tuesday and every Friday, and they’re done to the unbelievable detail that we need an NFL quarterback to do. From that standpoint, like I said I can’t predict the future, but all I can do is tell you right now Johnny Manziel is putting himself in a position to be a quarterback in the NFL.

Still, Manziel’s career in the NFL thus far has been much more talk than action. From Manziel saying at the end of his rookie season that, “I didn’t come out and perform this year and that’s what it comes down to. It was a different situation for me than I had been in the past. I’m upset with how I have handled things at times. I did grow up and then I took a step back. It is the same story with me. We’re taking one step forward and then two steps back,” to DeFilippo’s comments last week, there’s still not that much there there. Until Manziel can be an NFL quarterback, he’s just another guy. Seventy-nine snaps played in a year is barely one game’s worth of playing time.

In five games and two starts in 2014, Manziel completed just 18 of his 35 pass attempts, for 175 yards, zero touchdowns and two interceptions. He also ran nine times for 29 yards and a score. This isn’t the stat line of a guaranteed future starter. No matter how much optimism DeFilippo has that Manziel can turn into a quality, professional quarterback, no passer is starting for long in this league with a completion percentage barely north of 50 percent. And coaching cannot help the fact that Manziel is undersized and possesses an unorthodox skill set that needs to be reined in at the same time it is also schemed around.

This has little to do with the off-the-field Manziel of the past, as it must be assumed that Manziel has worked and continues to work to put that part of his life behind him. It has to do with Manziel’s actual ability to be a starter for the Browns in 2015 and beyond. He’s certainly not the starter yet. Browns head coach Mike Pettine said on Friday, via Scott Petrak of the Chronicle-Telegram, that veteran Josh McCown, signed by the Browns earlier this offseason, will be the team’s starter heading into training camp.

We’re not going to start talking competition. Josh will more than likely be the starter going into camp, and in the foreseeable future I don’t see that changing.” Pettine is not saying Manziel has no chance to start this year but that, “We want [Manziel] essentially with horse blinders on. Focus on his job, getting up every day, perfecting his craft, whatever it is, homework that the quarterbacks have or come out and working on his footwork, his releases. That he’s much more concerned about himself than really anything else.

With voluntary workouts over and minicamp season beginning, the chatter involving Manziel can finally evolve into action. As much as Manziel insisted he’ll change as a person, while admitting in the same breath that “It’s about actions, it’s about being accountable and doing what I’m going to say instead of looking like a jackass,” as he said when his rookie year wrapped, it’s the same on the field. He “can” be a quarterback in the NFL—but “will” he? The Browns have heavily invested into Manziel, but that doesn’t mean it will translate into on-field success. After all, Manziel is but one quarterback in a long line of would-be saviors for the Browns.

At some point, Manziel’s shot will come. But it’s up to Manziel to make that happen. Manziel must show that he’s grown and evolved and learned, both as a person and a quarterback, to wrest those starting reps away from McCown this summer. If he can’t, he may never get an opportunity to be a starter anywhere in the NFL again. The Browns are an impatient organization, both with their quarterbacks as well as with their coaches, and one more poor year for the team could spell the end of the coaching and front-office staffs that chose to draft him in 2014.

The deck is stacked against Manziel, but he can certainly put the work and effort into changing minds about his on-field abilities. Because, as Manziel himself said at the conclusion of his rookie season, “I’m either going to learn or I’m going to be finding something else to do.”