What should the Golden State Warriors do with Andrew Wiggins? 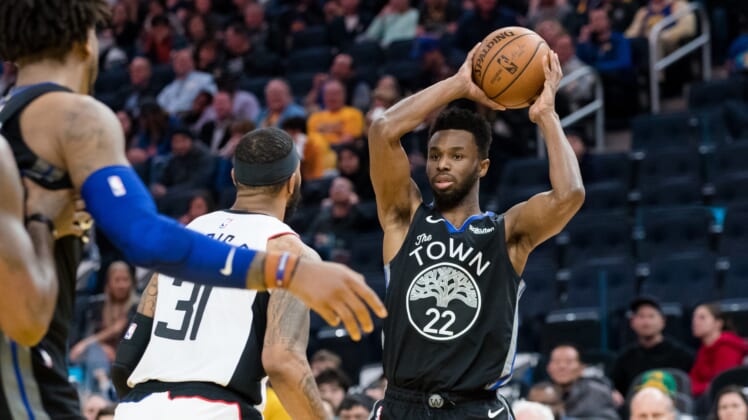 After trading away D’Angelo Russell for Andrew Wiggins, the Golden State Warriors have to decide what to do with the Wiggins moving forward. Now the question is, what should the Warriors do with him in the offseason?

The big picture: Should the Golden State Warriors move Andrew Wiggins in the offseason after trading D’Angelo Russell for him or should he remain on the roster to grow?

Touted as the next “LeBron James,” the former Minnesota Timberwolves wing hasn’t lived up to expectations. Although he has a penchant for taking long twos and mid-range shots, it’s undeniable that Wiggins’ athleticism is there.

Though he is very successful when he attacks the basket for his career – shooting around 53.3% within 16 feet – Wiggins is still taking more 30% of his shots from three-point land. Considering he’s a below-average shooter from three (33%), that’s a shot he needs to reduce until he gets better.

For his career prior to the Warriors, Wiggins put up:

A former first overall pick as athletically gifted as Wiggins is, those numbers need to improve. In his 12 games as a member of the Warriors, Wiggins’ numbers stayed fairly consistent, with him taking about 66% of his shots from within the three-point line.

Even though the Warriors made the playoffs in two of the three years under Mark Jackson, they still needed to take the next step. Enter into the equation Steve Kerr.

Under Kerr, the Warriors flew to new heights, amassing an NBA-record 73 wins in 2016. Kerr also led the Warriors to three championships in five years – which could have been four in five years if LeBron James didn’t have other plans.

This season notwithstanding – what with all the injuries the Warriors had – Kerr has led the team to the playoffs in every year and improved the team in every facet after taking over for Jackson. However, Kerr’s ability to relate to his stars, Stephen Curry and Klay Thompson, was ultimately what helped the team succeed, forming the vaunted “Splash Brothers.”

Under Kerr, Curry has morphed into a Hall of Famer and generational talent.

Even though Klay Thompson missed the entire 2019-20 season, he has elevated his game under Kerr.

Although Curry and Thompson were not bad players to begin with, Kerr’s guidance and coaching helped the two become All-NBA-type players. If Wiggins follows the same trajectory as the aforementioned two, it wouldn’t be surprising to see him take a similar leap.

Another route the Warriors can take with Wiggins is to use him as trade bait. With the Warriors presumably getting a high draft pick this coming October– by the way of having the worst record in the NBA – the team could opt to keep the pick or ultimately package it with Wiggins.

If the Warriors decide to keep the pick, they have options. Names like LaMelo Ball, Anthony Edwards, James Wiseman or even Onyeka Okongwu will be available for the Warriors.

But if the Warriors want to trade Wiggins, they will almost certainly have to add the pick as well. Wiggins’ salary is a big deterrent for most teams as he will make more than $90 million in the next three years. Though Wiggins puts up decent numbers, they don’t nearly justify the max contract he got from the Timberwolves.

Should the Warriors take the former route, the player selected can grow exponentially under the tutelage of one of the most respected head coaches (Kerr) and one of the most formidable backcourt duos in NBA history (Curry and Thompson). The player can also take his time to grow since the Warriors’ core is relatively young, especially with Wiggins as the starting small forward.

In the event the Warriors trade both Wiggins and the pick, rumors have circulated that the former might be used to bring in a veteran player. There have also been rumors that the Wiggins trade could be used to bring in Milwaukee Bucks star Giannis Antetokounmpo to the Bay Area.

Nonetheless, the Warriors have some big decisions to make in the coming months.

The bottom line: The Warriors should keep Wiggins

In all, the Warriors should keep Wiggins, even with all his flaws. Even though he isn’t a great shooter or the most defensively capable player, being around Kerr, Curry, Thompson and Green could help him become a better all-around player.

He may never be a shooter like Curry or Thompson or be as defensively active like Green, but being around championship-level players can only do wonders for Wiggins. He’s a solid wing player the Warriors need and his age (25) makes his fit and potential growth that much more intriguing.

With a full offseason to train and build chemistry, it’s up to Wiggins to live up to his potential as a former first overall pick. If he doesn’t, he could spend the rest of his career as an expensive journeyman.