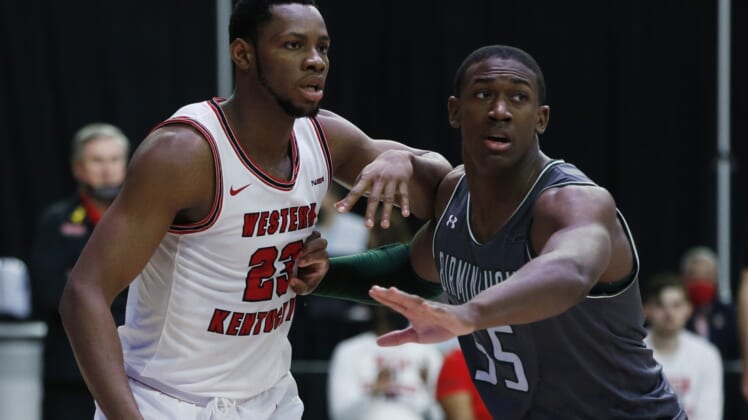 Bassey indicated he will retain an agent and is a full-go toward being part of the draft. He is forecasted to be chosen late in the first round.

The 6-foot-11 Bassey averaged 17.6 points and 11.6 rebounds and accumulated 87 blocked shots in 28 games this season while becoming the fourth player in Conference USA history to win Player of the Year and Defensive Player of the Year honors in the same season.

“Over the past 3 years, I have enjoyed my time here in Bowling Green and having the opportunity to play in Diddle Arena,” Bassey wrote in his announcement. “Each of you have welcomed me with open arms and supported me throughout my journey, and I couldn’t be more grateful.

“After much consideration and talking with my family, I have decided to pursue my dreams of playing at the next level and declare for the 2021 NBA Draft. Just know that WKU will always be a special place.”

Bassey’s stellar final season came after he sustained a season-ending fractured left leg that limited his previous season to 10 games.

In 2018-19, he averaged 14.6 points and 10 rebounds and recorded 81 blocks while earning Conference USA Freshman of the Year and Defensive Player of the Year honors.

In three seasons with the Hilltoppers, Bassey averaged 15.9 points and 10.5 rebounds. He had 184 blocked shots in 72 career games.