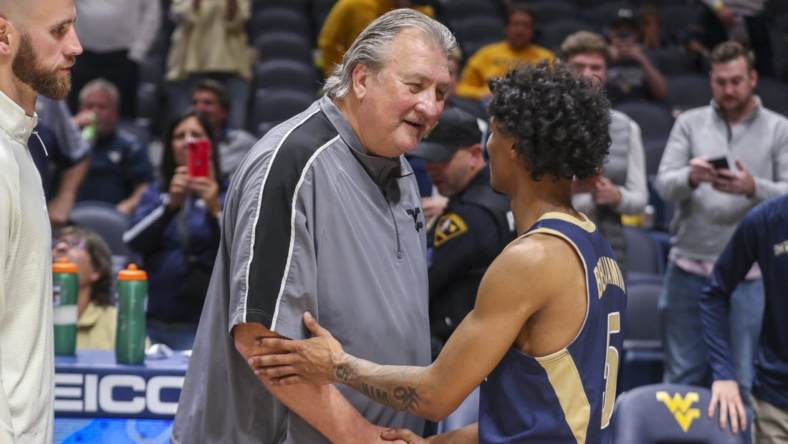 After turning the Backyard Brawl into something of a skip through the park, the West Virginia Mountaineers return to their home court in Morgantown, W.Va. Tuesday for a meeting with Morehead State.

The Mountaineers (2-0) rolled past Pitt 81-56 on Friday as coach Bob Huggins won his 918th career game to move two behind Jim Calhoun for third place on the all-time list. Only Mike Krzyzewski (1,202) and Jim Boeheim (998) have won more games.

West Virginia came ready to play, making nine of its first 10 shots and shooting 52.6 percent for the game. Joe Toussaint, a transfer from Iowa, scored 18 points and Erik Stevenson, a transfer from South Carolina, was 7-for-12 from the field and finished with 16 points.

“I thought it was a great team effort,” said Huggins, who turned 69 in September. “As I told (the players), we’ve won some things here, but we haven’t won the big one, the one that everybody wants. So, let’s just keep getting better. Let’s keep working at it and let’s not start lagging … Hopefully, they do.”

After a season-opening 88-53 loss to Indiana, Morehead State (2-1) followed with an easy victory over Division II Campbellsville-Harrodsburg (Ky.) and a hard-fought 62-55 triumph over Bellarmine.

The Eagles are expected to take what they learned at Indiana into Tuesday’s game against a top opponent.

“Often times, when you’re playing in these types of environments, the score gets away from you and guys tend to break apart, kind of do their own thing,” Eagles head coach Preston Spradlin said. “I thought we still tried to play the (Indiana) game the way we practice it every single day.”

In a balanced scoring attack against Bellarmine, Morehead State had four players score in double figures, led by Jake Wolfe’s 14 points. Drew Thelwell and Mark Freeman each had 13, and Alex Gross had 12 rebounds to lead the Eagles to a 47-33 rebounding advantage.

Morehead State held Bellarmine to 33.3 percent shooting from the field and just 13 percent (3 of 23) from 3-point range.

Tuesday’s game is a rematch of a first-round pairing in the 2021 NCAA Tournament at Indianapolis. West Virginia, who was a No. 3 seed, earned an 84-67 victory over No. 14 seed Morehead State. The Mountaineers have won all four meetings between the schools.