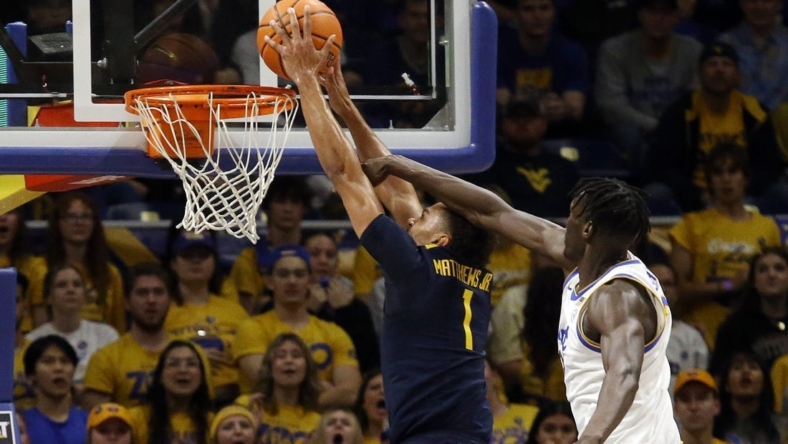 Joe Toussaint had 18 points and five assists Friday as visiting West Virginia posted a comfortable 81-56 victory over Pitt in the 189th edition of “The Backyard Brawl.”

Erik Stevenson added 16 points, while Mohamed Wague chipped in 11 on 5-of-5 shooting for West Virginia (2-0), which leads the all-time series 101-88. Emmitt Matthews Jr. added 10 points as the Mountaineers shot 52.6 percent as a team.

The Panthers (1-1) shot only 5 of 23 from 3-point range as part of a 42.2 percent overall shooting effort. They also committed 19 turnovers, including eight from Jamarius Burton.

Burton led the team with 16 points, while Greg Elliott pitched in with 12 points — all in the first half on three 3-pointers.

Pitt led 19-17 about seven minutes into the contest when Wague’s three-point play ignited a 9-0 run by the visitors. Wague continued the burst with two more layups before Toussaint converted a layup of his own for a 26-19 advantage.

The Panthers stormed back to tie it at 26-26, but the Mountaineers slipped back in front and then used a 12-4 run to close the half. Kedrian Johnson’s layup in the final seconds put West Virginia ahead 47-36 at the break.

The second half was drama-free for West Virginia, which used an early 9-1 run to expand its advantage to 56-40. Johnson started that burst with a 3-pointer before Stevenson scored the Mountaineers’ final six points of the surge.

The Panthers got as close as 59-49, but the visitors then went more than 5 1/2 minutes without a field goal as West Virginia’s lead bloated to 25 points.

Johnson had four assists and three steals for West Virginia, while Toussaint registered a pair of steals. The Mountaineers, whose next game is against No. 22 Michigan, finished with 19 points off turnovers.