Nov 16, 2021; Winnipeg, Manitoba, CAN; Winnipeg Jets forward Adam Lowry (17) is congratulated by his team mates on his goal against the Edmonton Oilers during the first period at Canada Life Centre. Mandatory Credit: Terrence Lee-USA TODAY Sports

Connor Hellebuyck made 33 saves and the Winnipeg Jets defeated the visiting Edmonton Oilers 5-2 on Tuesday night.

The Jets led 4-0 before Leon Draisaitl scored two power-play goals in a 1:16 span early in the third period.

Winnipeg’s Kyle Connor extended his goal streak to four games with an empty-netter.

Mikko Koskinen allowed four goals in 26 shots over two periods. Stuart Skinner made eight saves in the third period for the Oilers, who finished their road trip 2-3-0.

Draisaitl extended his goal streak to four games, and he has 20 points (12 goals, eight assists) in his past eight games. He leads the NHL with 17 goals.

Edmonton’s Connor McDavid had a third-period assist to extend his season-opening point streak to 15 games. 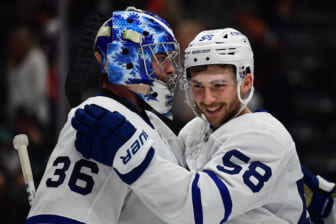 The Jets took a quick 1-0 lead at 2:09 of the first period when Lowry forced a turnover at center ice, carried it in and beat Koskinen with a wrist shot from above the right circle.

Ehlers went far side with a slap shot from the top of the left circle to give the Jets a 2-0 lead at 6:59 of the second period.

Dubois made it 3-0 when he redirected Josh Morrissey’s pass home from in front of the net for a power-play goal at 10:01.

It was the first time this season that Edmonton had trailed by as many as three goals.

Logan Stanley’s shot from the point was deflected in by Scheifele at 19:22.

Draisaitl scored on a one-timer from the right circle off a pass from McDavid during a 5-on-3 advantage at 2:32 of the third period.

Draisaitl scored again on a power play at 3:48. The goal was initially waived off for goaltender interference; but, after a coach’s challenge, it was ruled the player was pushed into Hellebuyck by a Winnipeg skater.