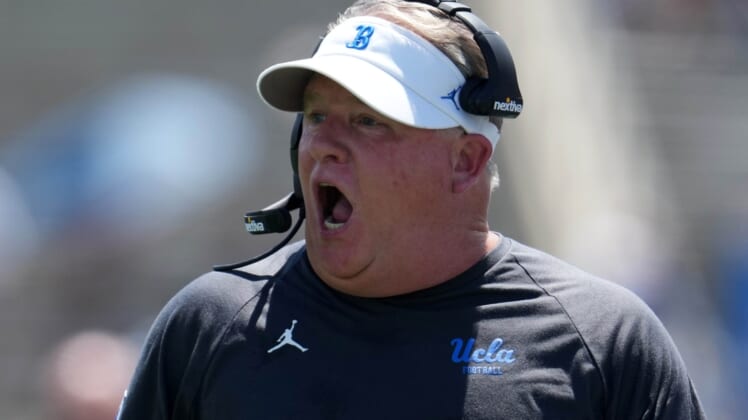 Brittain Brown rushed for a season-best 146 yards and scored a touchdown and Zach Charbonnet added a season-high 117 as UCLA ran to a 34-16 victory over Arizona in Pac-12 play on Saturday night at Tucson, Ariz.

Dorian Thompson-Robinson rushed for two touchdowns and added a passing score as the Bruins (4-2, 2-1 Pac-12) racked up 329 yards on the ground.

Jordan McCloud completed 21 of 30 passes for 182 yards before leaving with an apparent right knee injury for the Wildcats (0-5, 0-2).

Thompson-Robinson was just 8-of-19 passing for 82 yards and one interception but the Bruins outgained the Wildcats 411 to 362.

Thompson-Robinson’s 4-yard scoring run to the right side gave UCLA a 24-16 advantage with 4:06 left in the third quarter.

McCloud was injured on the third play of the fourth quarter on the strip-sack by Otito Ogbonnia with 14:14 remaining. McCloud was seen on the sidelines sporting crutches and an icepack on the knee.

Brown later put the game away on a third-and-2 play when he raced up the middle for a 48-yard scoring run to give the Bruins a 15-point edge with 7:48 remaining.

Gunner Cruz completed 4 of 7 passes for 48 yards in place of McCloud for the Wildcats.

The Wildcats received a 28-yard field goal from Tyler Loop to cap their opening drive. But the Bruins answered with a touchdown as Thompson-Robinson connected on a 3-yard pass to Greg Dulcich with 3:48 left in the first quarter.

Arizona moved within 7-6 when long-range kicker Lucas Havrisik booted a 46-yard field goal with 14:18 left in the first half. The Bruins pushed the lead to eight when Thompson-Robinson scored on a 2-yard keeper with 3:01 left.

The Wildcats used a trick play to pull within one. McCloud threw a backward pass to his left to Jamarye Joiner and the former high school quarterback delivered a 10-yard touchdown pass to Michael Wiley with 30 seconds remaining.

The teams traded field goals in the first 6:42 of the third quarter. Barr-Mira kicked a 23-yard field goal for the Bruins and Havrisik was again good from 46 for Arizona.