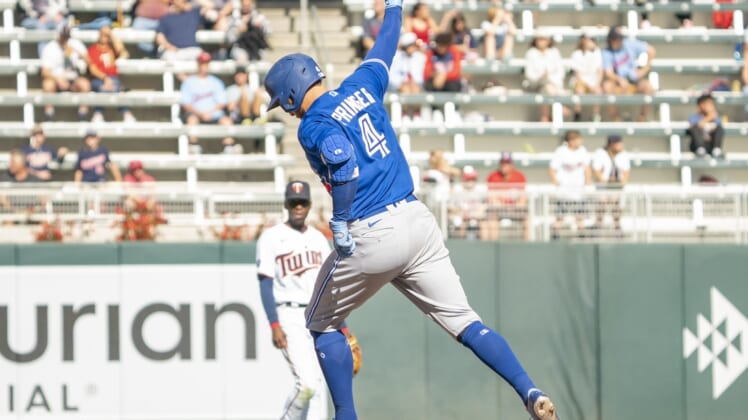 Danny Jansen hit a three-run home run and George Springer homered for the second straight game to lead the Toronto Blue Jays to a 5-2 victory over the Minnesota Twins on Sunday afternoon in Minneapolis.

The Blue Jays (87-69), who open a three-game series with the New York Yankees on Tuesday in Toronto, will trail the loser of Sunday night’s New York-Boston showdown at Fenway Park by one game for the final American League Wild Card spot after earning a split of their four-game series with the Twins.

Alek Manoah (8-2) won his third consecutive start, allowing two runs on six hits over 5 2/3 innings. He walked two and struck out eight as the Blue Jays won for 10th time in his last 11 starts. Jordan Romano struck out three of the four batters he faced over 1 1/3 shutout innings to earn his 21st save.

Springer, who snapped an 0-for-22 drought against the Twins on Saturday night, finished 3-for-4. Bo Bichette also had two hits for Toronto.

Toronto jumped out to a 3-0 lead in the second inning on Jansen’s ninth homer of the season, a 402-foot drive to left-center that drove in Corey Dickerson and Santiago Espinal, who both reached base on bloop singles.

Minnesota answered with a run in the bottom half of the inning. Mitch Garver led off with a walk, went to second when Miguel Sano was hit by a pitch and scored one out later on a single by Jake Cave.

Springer made it 4-1 in the fifth with his 19th home run of the season, a line drive into the bullpen in left-center.

The Twins cut it to 4-2 in the bottom of the fifth on Buxton’s 16th home run of the year, which matched his career high.

The Blue Jays extended their lead to 5-2 in the eighth when left fielder Brent Rooker lost Bichette’s routine fly ball in the sun for a double. Teoscar Hernandez then drove in Bichette with a double into the left-field corner.

Minnesota, which finished 1-for-10 with runners in scoring position, brought the tying run up in the bottom of the eighth on a two-out single by Kepler followed by a double off the right-field wall by Garver. But Romano came in and struck out Sano to end the threat.