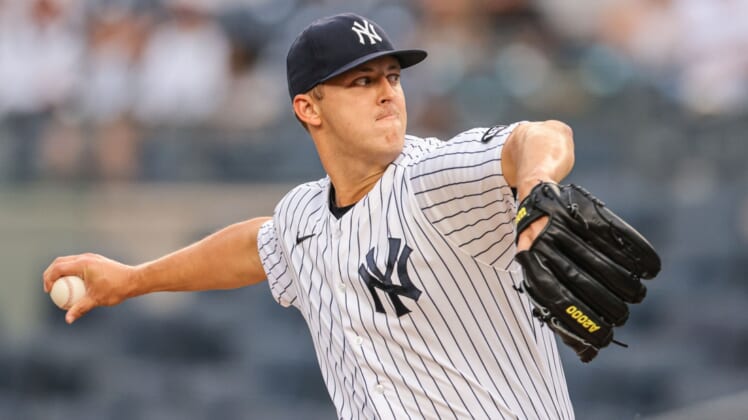 Tony Kemp hit a go-ahead three-run homer in the sixth inning and the Oakland Athletics extended their winning streak to seven games with a 5-3 victory over the New York Yankees Friday night at Yankee Stadium.

It was the first game in New York without any COVID-19 capacity restrictions and the game drew 24,037 fans. It was the largest crowd at Yankee Stadium since 48,483 fans attended New York’s 4-1 victory over the Houston Astros in Game 5 of the 2019 American League Championship Series.

Kemp gave the A’s a 5-3 lead when he lifted a 2-2 slider from left-hander Wandy Peralta (3-2) into the right field seats. The left-handed-hitting outfielder homered after fouling off two pitches to start the at-bat and it was his 18th career homer and third off a left-handed pitcher.

Yusmeiro Petit ended the sixth by retiring Giancarlo Stanton and ended the seventh by retiring pinch hitter Gary Sanchez. Jake Diekman pitched a perfect eighth and Lou Trevino got Gio Urshela to hit into a double play for his 12th save in 14 chances.

Rougned Odor and DJ LeMahieu homered for the Yankees, who lost for the eighth time in their past 11 home games since sweeping a three-game series from the Chicago White Sox May 21-23.

Odor gave the Yankees a 3-2 lead when he opened the fifth by hitting a full-count fastball into New York’s bullpen beyond the right-center field fence. LeMahieu had tied it in the third by hitting an 0-1 fastball well over the right field fence.

Matt Olson hit his 19th homer nine pitches into the game by blasting an 0-2 slider from New York right-hander Jameson Taillon into the second deck in right field. Oakland took a 2-0 lead when Elvis Andrus doubled and scored standing up on a single by Mark Canha in the third.

New York’s Taillon allowed two runs on four hits in 4 2/3 innings six days after getting one out in Philadelphia for his shortest career start. He struck out five, walked one and threw 76 pitches.