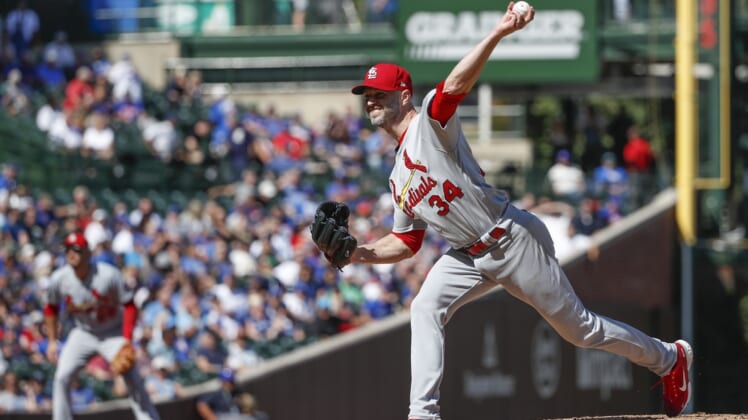 Paul Goldschmidt hit a home run and drove in three runs to power the visiting St. Louis Cardinals to yet another victory, getting the best of the Chicago Cubs 8-5 on Friday afternoon to win their 13th consecutive game.

Tyler O’Neill and Jose Rondon also hit two-run home runs for the Cardinals (84-69) in the opening game of a doubleheader. St. Louis continued to solidify its standing as the second wild card in the National League with a five-game lead over the closest pursuer.

Sergio Alcantara hit a two-run homer for the Cubs and Austin Romine hit a two-run double as Chicago (67-86) lost for the 10th time in its past 12 games.

Cardinals starting pitcher J.A. Happ delivered four scoreless innings while working around four walks and two hits. Alex Reyes (10-8) took over in the fifth inning to earn the victory and Giovanny Gallegos closed out the seventh inning for his 13th save.

Happ helped his own cause with a one-out walk in the third inning. After Tommy Edman hit into a force out, Goldschmidt hit his 30th homer to put the Cardinals up 2-0.

The Cardinals escaped major trouble in the fourth inning. Happ walked Patrick Wisdom with one out, allowed Matt Duffy’s single then walked Nico Hoerner on four pitches to load the bases. But he struck out David Bote and Trayce Thompson to end the threat.

The Cardinals pushed their lead to 6-0 in the fifth inning. Harrison Bader hit a leadoff double and scored on Rondon’s pinch-hit blast, his second home run of the season.