Joao Paulo’s goal in the first half stood as the only one in the Seattle Sounders’ 1-0 win over the visiting Minnesota United on Saturday afternoon.

The victory kept Seattle (13-4-6, 45 points) atop the Major League Soccer Western Conference standings and ended a four-match winless streak at home for the two-time league champions.

Seattle had several good scoring chances before cashing in in the 22nd minute. Shots from Nicolas Benezet and Will Bruin in the 11th and 12th minutes were stopped by Minnesota goalkeeper Tyler Miller.

Hassani Dotson had two shots for Minnesota (8-7-7, 31 points) after that, but one missed wide and one was saved.

In the 22nd minute, Benezet sent a pass from out of a corner to Joao Paulo, who rolled his shot to the far post and found the net with a more precise than powerful strike of the ball.

Minnesota’s Ethan Finlay got close enough for a shot on goal in the 33rd minute, but Sounders goalie Stefan Frei stopped it.

Bruin delivered a header to Benezet on the break in the 41st minute, and the native of France worked through defenders to get off a shot that just missed right of the net.

Early in the second half, a late challenge by Minnesota United midfielder Osvaldo Alonso resulted in a yellow card and a suspension for the former Sounders fan favorite for Minnesota’s next game.

In second-half stoppage time, Minnesota got a free kick from just outside the box, but the Sounders blocked it and the ball never got close to the net. 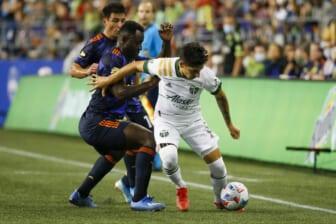 Both Miller and Frei finished with four saves each.

Seattle has won all six meetings with Minnesota United at home. Minnesota has scored only 24 goals in its 22 games played, and only one other club in the West, Austin, has scored fewer total.