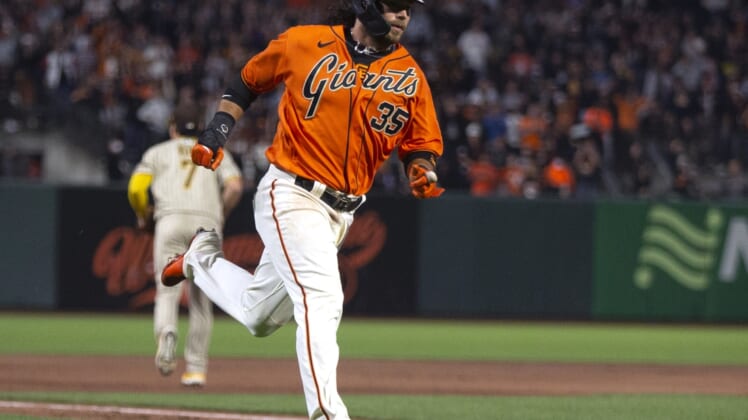 Anthony DeSclafani combined with four relievers on a nine-hit shutout Friday night as the San Francisco Giants moved to the doorstep of a National League West title with a 3-0 victory over the visiting San Diego Padres.

A seventh straight win clinched no worse than a tie for the West crown for San Francisco (106-54).

The Giants players rushed back into the clubhouse after Camilo Doval recorded the final out in hopes that the second-place Los Angeles Dodgers would lose their home game against the Milwaukee Brewers that was still in progress, allowing San Francisco to pop the corks on the awaiting champagne.

Staked to a 2-0 lead in the first inning, DeSclafani (13-7) breezed through five innings, allowing four hits and no walks. He struck out three.

Jose Alvarez, Dominic Leone, Tyler Rogers and Doval wrapped up with four innings of scoreless relief, giving the Giants their 18th shutout win of the season.

Doval struck out two in a 1-2-3 ninth for his third save.

The Giants jumped on Padres starter Pedro Avila (0-1) for two runs in the bottom of the first, the first of which coming on a one-out homer by Darin Ruf, his 16th long ball of the season.

A two-out throwing error by Padres third baseman He-Seong Kim opened the door for a second run, which scored on a Mike Yastrzemski single after Wilmer Flores had drawn a walk.

Those were the only runs allowed by Avila, who was making just his second major league appearance, with the other coming in 2019. He was charged with just one earned run on four hits in four innings, with three walks and five strikeouts.

The Giants padded their lead in the sixth when Donovan Solano doubled, advanced a base on a pinch hitter Tommy La Stella’s infield out and scored on a LaMonte Wade Jr. sacrifice fly.

The homer by Ruf and double by Solano were the only extra-base hits for the Giants, who were out-hit 9-6.

Seeking to put an impressive capper on his Most Valuable Player-contending season, Fernando Tatis Jr. had a double and a single for the Padres, who dropped their seventh straight.

Trent Grisham and Wil Myers also had a pair of hits for San Diego (78-82).