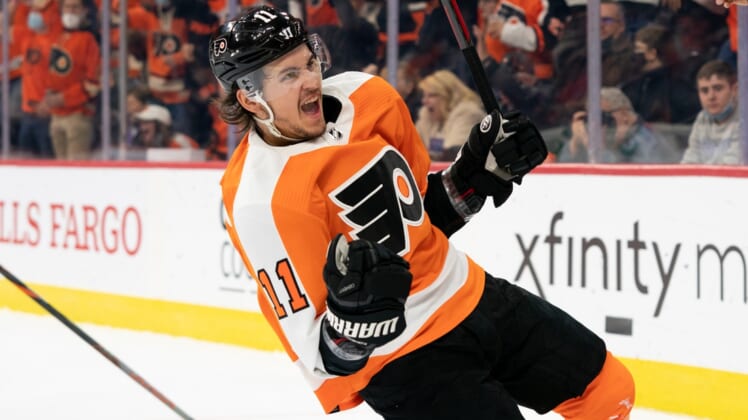 Derick Brassard scored one goal and had two assists to lift the host Philadelphia Flyers to a 6-1 victory in their first career meeting against the Seattle Kraken on Monday.

Travis Konecny, Joel Farabee and Justin Braun each added one goal and one assist for the Flyers.

Claude Giroux and Ryan Ellis also had one goal apiece for Philadelphia. Eleven different Flyers chipped in with at least one point.

Philadelphia goaltender Carter Hart bounced back from a subpar performance in the opener against the Vancouver Canucks when he allowed four goals. Hart made 23 saves against Seattle for his 50th career victory.

Carson Soucy scored the lone goal for the Kraken.

The Flyers went ahead 1-0 at 9:18 of the first period when Giroux fired a slap shot just under the crossbar.

Konecny took advantage of a bouncing puck off a rebound and scored for a 2-0 Philadelphia lead at 12:12. The Flyers stayed aggressive and took a 3-0 advantage at 14:36 when Brassard scored. The puck deflected off Soucy and into the net.

The Kraken were awarded their first power play at 3:57 of the second when Nick Seeler was whistled for interference. They generated very little offensively, however, with the extra skater.

Ellis scored the fourth goal at 7:10 and Braun propelled the Flyers to a commanding 5-0 lead at 8:49.

Farabee pushed the Flyers lead to 6-1 when he connected at 5:15 of the third.

The game was physical throughout with a pair of fights. The second fight occurred at 9:11 of the third between Philadelphia’s Nate Thompson and Seattle’s Nathan Bastian.