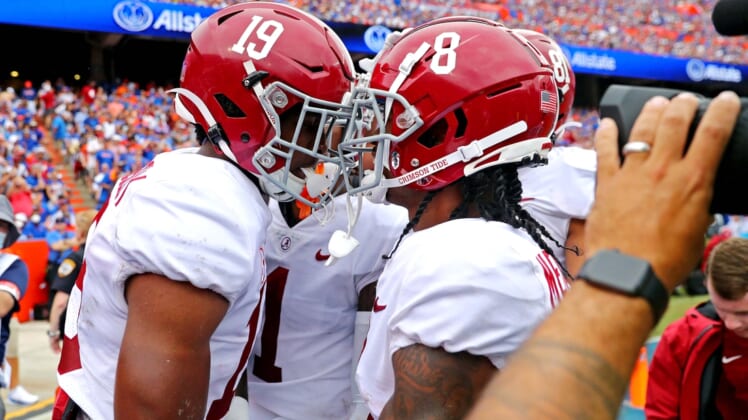 Top-ranked Alabama got three touchdown passes from freshman Bryce Young on Saturday and stopped a potential game-tying 2-point conversion late in the fourth quarter to hold off No. 11 Florida 31-29 in Gainesville, Fla.

The Gators (2-1, 0-1 Southeastern Conference) pulled within two points with 3:10 left in the game on a 17-yard touchdown run by Dameon Pierce. But Malik Davis’ 2-point attempt to even the score failed.

The Gators missed an extra-point try in the second quarter, setting up the two-point deficit.

By the time Florida got the ball back, it had just 4 seconds and was at its own 24. The Crimson Tide (3-0, 1-0) made it academic by sacking Emory Jones to end the game.

Young completed 22 of 35 passes for 233 yards and no interceptions in his first true road start. Brian Robinson Jr. rushed for 75 yards on 14 carries, scoring touchdowns on the ground and in the air.

Jones completed 17 of 27 passes for 181 yards and an interception, his fifth in three games. He also rushed for 80 yards and a touchdown on 19 carries, while Davis added a game-high 96 rushing yards on 11 attempts.

Alabama established a 21-3 first quarter lead behind Young. He found Jase McClellan, Jahleel Billingsley and Robinson for scores of 7, 26 and 7 yards.

Florida clawed within 21-9 at halftime on Davis’ 26-yard touchdown run, then closed within 21-16 just over four minutes into the third quarter on a 3-yard rushing score by Pierce, the first of his two TDs.

Robinson made it 28-16 on a 3-yard touchdown run with 4:33 left in the third quarter, but Jones answered with a 5-yard scoring run 29 seconds before the end of the third period.

Alabama kicker Will Reichard connected on a 24-yard field goal with 9:30 remaining for a 31-23 lead.

Click here to see who’s closest to Alabama for No. 1 in our top 25 college football rankings