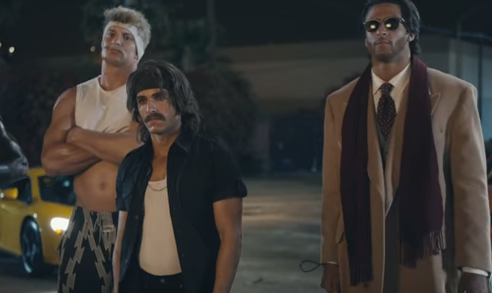 The promotion team for Madden 16 stepped up its game with a new video titled “Madden: The Movie.”

This promo is amazing.

Featuring the likes of Rob Gronkowski as “Half Top,” Julio Jones as “Trick Montalban,” Antonio Brown as “Sticky Bun,” Rex Ryan as “Lil’ Pepper,” and Colin Kaepernick as “Al Pacino from Scent of a Woman,” this is a promo of epic proportions.

The team of playmakers, as they’re called, helps “Blade Johnson,” played by Dave Franco, and “Janet,” played by Christopher Mintz-Plasse, to track down Johnson’s girlfriend, who is being held hostage by an evil villain.

Unfortunately, “Lil’ Pepper” doesn’t make it, and you definitely need to watch out for the T-Rex.