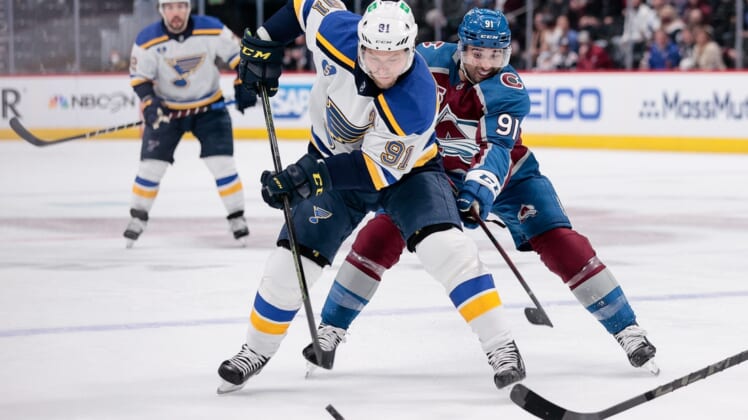 Nathan MacKinnon had two goals and an assist, Gabriel Landeskog had a goal and two assists, and the host Colorado Avalanche beat the St. Louis Blues 4-1 in Game 1 of their first-round series in Denver on Monday night.

Jordan Kyrou scored a goal and Jordan Binnington had 46 saves for the shorthanded Blues. St. Louis played without its points leader, David Perron, who was placed on the COVID-19 health and safety list.

The game was tied 1-1 after two periods, but the Avalanche quickly broke the deadlock. Rantanen got the puck below the St. Louis net and fed MacKinnon in front, and he put a shot into the right corner 30 seconds into the third to put Colorado ahead.

The Avalanche went up by two when Landeskog tipped MacKinnon’s slapshot from the point past Binnington at 8:30 of the third.

Binnington came off for an extra skater with 1:30 left, and MacKinnon scored into an empty net at 19:20. 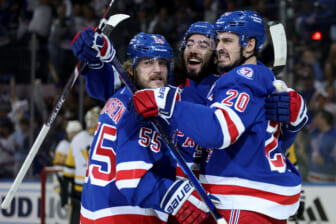 Things got contentious early after Rantanen was knocked down by Brayden Schenn midway through the first period. Landeskog and Schenn dropped the gloves, and both received fighting majors.

Later in the period, St. Louis center Ryan O’Reilly took a tripping minor, and the Avalanche took advantage on the ensuing power play. Rantanen won a faceoff back to Makar, who maneuvered around Tyler Bozak and beat Binnington with a shot from the top of the slot at 15:15.

Both goaltenders made big saves in the second period. Binnington was face down and lifted his pad to save Rantanen’s shot, and later made a stop on Tyson Jost’s breakaway.

Colorado defenseman Ryan Graves got his stick in front of Mike Hoffman’s wraparound attempt to save a goal, but the Blues tied it late in the second on an odd-man rush. Ivan Barbashev got a pass from Rob Thomas and backhanded the puck to Kyrou, whose one-timer beat Grubauer at 16:31.

It was the first postseason goal of Kyrou’s career.